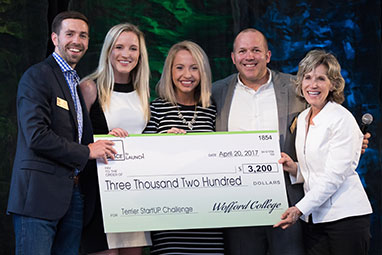 SPARTANBURG, S.C. – In a celebration of the entrepreneurial spirit, Wofford College showcased seven student ventures in the TerrierStartUP Challenge on Thursday, April 20, and rewarded four of the projects with prize money to take their ideas further toward fruition.

Student teams or individuals presented their ventures to a team of four guest judges, Ronnie Andrews, a 1981 Wofford graduate and serial biotech entrepreneur and innovator in genotyping and bio informatics; Tramaine Brown, a 2011 graduate who is a diversity and inclusion practitioner at Apple focusing on creating synergy between Silicon Valley and the nation’s historically black colleges and universities; Jacquelyn Thomas, scientist, educator and pioneer in STEM and STEAM education and executive director/founder of Kids N Technology and Girls Pursuing Science; and Gil Vassoly, CFO of Gibbs International in Spartanburg.

Andrews was the featured speaker for the event, telling the packed crowd in the Galleria of the Michael S. Brown Village Center, they should know and embrace their strengths. “Know your five stones,” he advised, referencing the story of David and Goliath. “David studied the situation and recognized Goliath’s weakness in having poor peripheral vision. David discarded his armor and selected five smooth stones that he knew would help him defeat Goliath. Know your five stones – your strengths in facing challenges.”

The Wofford Wrap, a new student organization that aims to “expand and contribute to the existing Wofford media ecology” while giving students a new learning experience with multimedia journalism, was the grand prize winner, placing first in the nonprofit category and garnering the group a total of $3,200 in prize money. The Wofford Wrap was the brainchild of seniors Virginia McCully, an English major with a minor in business from Orangeburg, S.C., and Scottie Kay Auton, an English major from Gaffney, S.C.

Taking first place and $2,000 in the for-profit category was Voyway, a travel app that aggregates multiple travel and connection options in one location. Its creators are Jack McDonald, a sophomore from Mendon, N.Y., who is majoring in finance and accounting with a minor in economics; and Phillip Habib, a junior economics major from Goose Creek, S.C.

Second place and $1,400 in the nonprofit category was the Tied & True Ltd. Co. of Will Randall, sophomore from Greenville, S.C., majoring in biology and Spanish. The company specializes in handmade bow ties for a cause. Proceeds from sales of the bow ties support education, medical care, clean water and nutrition for the people of Guatemala through the nonprofit Mission Guatemala.

Sides, a social app exclusively for the Wofford campus community created to bridge the gap between people and organizations, took second place in the for-profit category. It was created by Chie Mushayamunda, a junior from Winston-Salem, N.C. She received $1,400.

The Terrier StartUP Challenge was sponsored by Launch, Wofford’s entrepreneurship program in The Space in the Mungo Center, the college’s professional development center. Launch helps students, regardless of their academic major, unleash their entrepreneurial talents to start and grow successful ventures and develop an entrepreneurial mindset.

“Launching a new idea and starting a company is a great way for students to distinguish themselves as leaders and to develop a highly sought-after skill set,” says Lynne Salkowski Mullin, assistant director of entrepreneurial program.