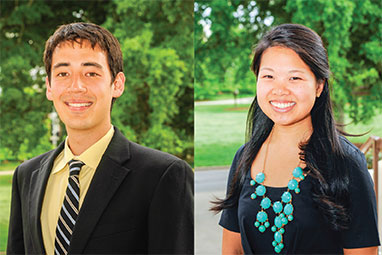 SPARTANBURG, S.C.  – David Moore and Anna Le grew up in Spartanburg, meeting for the first time in second grade and both graduating from Paul M. Dorman High School in Spartanburg District Six.

They continued as neighbors and friends as Wofford College students, both graduating in 2013 – Le in May and Moore in December.

Now, they’ll continue being neighbors of sorts halfway around the world – in Asia — as the two begin their English Teaching Assistant Programs through the prestigious Fulbright U.S. Student Program.

Moore, a triple major in chemistry, mathematics and German and a Richardson Scholar – among Wofford’s most prestigious scholarships – was the college’s 29th Presidential International Scholar. He used his year of study under that scholarship to research the development and use of renewable energy, primarily in South America.

While at Wofford, Moore, the son of Bryan and Sun Chai Moore of Spartanburg, studied abroad in Germany, Argentina, Brazil, Chile, Ecuador, Italy and South Korea. He also traveled in Europe following graduation. He conducted research in nuclear chemistry during an internship in Germany at the Johannes Gutenberg-Universität Mainz and at the Pacific Northwest National Laboratory. Currently, he is completing an internship in Chicago. He will attend Rice University following the completion of his Fulbright assignment.

“Grateful, ecstatic, excited, and relieved” is how he describes his emotions about being selected for the Fulbright, which he says will allow him to learn more about his mother’s heritage. “My mother moved to the U.S. when she was 14 years old and never returned to South Korea,” he says. “My grandmother was on one of the last trains to leave North Korea in order to continue her studies in Seoul when the border was closed. She was never able to return.”

Moore says he wanted to return to Korea – he had spent an Interim there two years ago – to “fully experience Korean culture and learn more about my mother’s roots. My goal is to build connections via language and culture with the Koreans I meet in the community. I hope to share my passion for language learning in the classroom by teaching my Korean students English. Lastly, it will be a very special moment to see my mother return to her home country after several decades away, and I can’t wait for it.”

Le, the daughter of Chuong and Lien Le, was inducted into Phi Beta Kappa while at Wofford, where she majored in chemistry and was on the Dean’s List every semester. She was the recipient of the Arthur B. and Ida Maie S. Rivers Award at Wofford in 2013, and she studied abroad in Vietnam, Italy and Chile. She spent the past year attending Johnson and Wales University in Charlotte, N.C. She plans to attend medical school at Tulane University after her Fulbright assignment is completed.

“As an English teaching assistant, I want to be an integral part of advancing my students’ language skills and familiarity with American culture,” Le says. “As a bi-lingual Vietnamese American, I want to serve as a cultural ambassador within the university and community, another primary intention of the Fulbright program.”

Le says her vision for her 10-month Fulbright grant term is to “see each student possessing a stronger sense of confidence in their capabilities to carry on an English discussion with each other and with native English Speakers, and I hope to be a continual resource for my students, the university professors and future Fulbrights.”

Her medical interests, though “not set in stone,” lean toward primary care practice, particularly ob/gyn. “From my shadowing experience, I was drawn to the dynamics of both maintaining relationships with patients through primary care visits and splitting time in the surgical room.”

Le says her experiences at Wofford have prepared her for the Fulbright assignment and beyond. “My Wofford education has equipped me with critical and analytical thinking skills, strengthened my communication skills, and sparked my motivation and confidence to confront challenges and pursue what may seem like unrealistic achievements. Without that motivation, I may not have looked into studying abroad in Vietnam nor would I ever think to apply for the Fulbright.”

Moore echoes his friend. “The sheer number of opportunities available for Wofford students to grow and to learn both inside and outside of the classroom is what prepared me the most,” he says. “The support of the faculty and staff, and the open-ended curriculum allowed me to tailor my studies to promote my strengths and bolster my weaknesses.”

He adds: “I believe the Wofford education is ultimately about tackling any new problem or situation with confidence and poise – and all the while, knowing there is an amazing network of Wofford family and friends there to support you.”

“David’s achievements exemplify Wofford’s mission to educate well-rounded, critically engaged and globally minded citizens,” says Dr. Kirsten A. Krick-Aigner, professor and chair of the department of modern languages, literatures and cultures. “As a German, math and chemistry triple major and Presidential International Scholar, David has shown us that a liberal education can propel engaged students into a life and career where they are personally and professionally fulfilled, where they can become leaders and give back to their communities. David’s desire to learn multiple languages while at Wofford reflects his willingness to reach out and immerse himself in the world around him. While his German is at an almost near-native proficiency level, he also has studied Portuguese at Middlebury College through an intensive summer program, and is now learning Korean in preparation for his Fulbright year. Along with his many talents, David’s infectious personality stems from his humor, his humility, and his joy in lifelong learning. I look forward to hearing about his adventures in Korea next year.”

Dr. Cynthia T. Fowler, associate professor of sociology, says Le will be “a stellar Fulbright Teaching Assistant. As a deeply engaged student, Anna contributed to the life of the college through her work as a teaching assistant in the organic chemistry and physics lab courses, as a tutor for chemistry students, and as a vibrant chemistry major. Anna’s love for Vietnam is obvious when she talks about her experiences on a 2009 trip to visit relatives, and when she reminisces studying abroad in Ho Chi Minh City with the School for International Training (SIT) in 2012. She has great enthusiasm for the Vietnamese language, culture, art and food. As a Fulbright Teaching Assistant, she will make learning English fun for her students through the use of creative classroom activities and thought-provoking conversations. Anna is maturing into an outstanding transcultural ambassador and an amazing global citizen.”

Moore and Le join more than 100,000 Fulbright U.S. Student Program alumni who have undertaken grants since the program began in 1948.