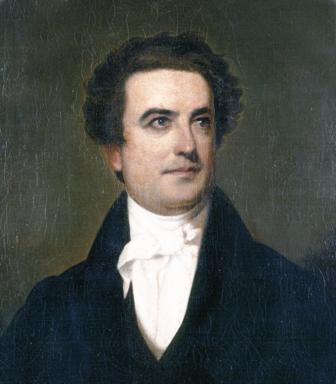 A minister, professor, fundraiser, newspaper editor, friend of Ben Wofford and a founding chairman of the board of trustees of Wofford College, William Wightman brought all of these experiences together as he took the helm of the college as its first president.

William May Wightman was born in Charleston, SC on January 29, 1808 to William and Matilda Wightman. His parents were active Methodists, and his mother, a native of Plymouth, England, is reputed to have sat in the lap of John Wesley more than once as a small child. Matilda Williams Wightman's parents were friends of early British Methodist leader Adam Clarke, so the family's ties to the beginnings of Methodism were strong.

The oldest of eight children, Wightman graduated from the College of Charleston in 1827. His valedictory address is in the Wightman papers in the Wofford Archives. He joined the South Carolina Annual Conference of the Methodist Episcopal Church in 1828 and served appointments over the next six years on the Pee Dee Circuit and in Orangeburg, Charleston, Santee, Camden, and Abbeville. In 1834, he became a financial agent for Randolph-Macon College in Virginia, the oldest Methodist college in the south, and over the next three years, helped raise $20,000 to fulfill the Conference's pledge to endow a chair at Randolph-Macon. Three years later, he became professor of English literature there, a position he held for two years.

In 1839, he returned to South Carolina to become the presiding elder of the Cokesbury District, and in the summer of 1840, he became the editor of the Southern Christian Advocate, with headquarters in Charleston. He served for more than ten years as the Advocate's editor. His pulpit throughout the 1840s and early 1850s was the Advocate, a newspaper read by Methodists all over the southeast. He also served concurrently as an agent for the Methodist Book Concern in the late 1840s. In his years as a minister, presiding elder, professor, and editor, he grew in stature to become the leading member of the South Carolina Annual Conference. He was first elected a delegate to the General Conference in 1840, was a member of the 1844 conference that saw American Methodism split into northern and southern branches, and was at the 1845 founding conference of the Methodist Episcopal Church, South, in Louisville, KY. He was a member of every succeeding General Conference until elected a bishop.

His friendship with Benjamin Wofford probably dated from Wightman's years as a financial agent of Randolph-Macon. Wightman must have made quite an impression on the elder minister, for Wofford pledged $10,000 to Randolph-Macon. In his journal, Wightman notes that he and Wofford had many conversations about education, and there is reason to think that Wightman, his brother-in-law Hugh A. C. Walker and Ben's wives, Anna Todd Wofford and Maria Barron Wofford, were all among those who encouraged Benjamin Wofford to establish and endow a college.

In his February 1850 will, Benjamin Wofford named William Wightman and H. A. C. Walker to the board of trustees of the new college, and Wightman became president of the board when it met at Spartanburg's Central Methodist Church in April 1851. Wightman served on the trustee building committee, and with such strong Charleston connections, he probably had more to do with the selection of Charleston architect Edward C. Jones as architect of the Main Building than any other member of the committee. Undoubtedly the words in the Advocate editorials describing the plans for the College's Main Building were his. On July 4, 1851, Board Chairman Wightman, the other trustees, his fellow ministers, and citizens of Spartanburg joined to lay the cornerstone of Main Building. Wightman gave the keynote address, announcing a vision that described the new college's place in Methodist higher education.

As a leading member of an Annual Conference becoming increasingly interested in higher education, and as the leading trustee in the effort to build the college, it is little wonder that the permanent board of trustees, at their first meeting in November 1853, elected William Wightman to be the first president of Wofford College. That board also chose four other members of the first faculty, though one of them declined and another got permission to travel for a year to purchase scientific equipment for the laboratories.

Having risen to the presidency at Wofford College, Wightman had to set about making Benjamin Wofford's dream a reality. The college opened on August 1, 1854, with the 46-year-old Wightman and his two colleagues present to welcome the first seven students. The campus was still being constructed when classes began, and only in January 1855 did the building committee turn the property over to the permanent trustees. Wightman continued to raise money, the Annual Conference pledged $11,000 to fund the tuition of candidates for the Methodist ministry. George W. Williams of Charleston, who had married one of Wightman's sisters, pledged $5,000 for ministerial education. The new president traveled widely in the state to raise funds to increase the endowment.

In 1855, the college opened a preparatory department that enrolled 34 students. Between 1856, when Samuel Dibble became the first graduate, and 1859, when Wightman resigned the presidency, the classes increased in size annually. Wightman signed some 33 diplomas in his five years as president. The two subsequent classes saw 31 more students earn their degrees. David Duncan Wallace described Wightman as "a man of vigorous, even powerful physique, and, we may add, of vigorous, even powerful emotions." A colleague at the Advocate said of him, "There was a volcano in his breast."

His presidency of Wofford having succeeded in providing the college a firm foundation, Wightman left the college in 1859, when he was elected chancellor of Southern University in Greensboro, AL. He transferred his conference membership to the Alabama Conference as well.

After narrowly losing an election to become bishop in 1854, Wightman was elected a bishop by the 1866 General Conference. Upon his election, he returned to Charleston, where he established his headquarters. He purchased a house at 79 Anson Street in the Ansonborough section of Charleston. That house, built before 1760 and known as the Daniel Legare house, is one of the oldest homes still standing in Ansonborough. That fall, Wightman presided over his first South Carolina Annual Conference. Until his death in 1882, he presided over conferences around the south. He presided over his last South Carolina Conference in 1879. He died on Feb. 15, 1882 in Charleston, and he is buried in that city's Magnolia Cemetery. The bells of St. Michael's tolled for the Methodist bishop, a rare honor that the Episcopalians conferred upon this leader of southern Methodist higher education.