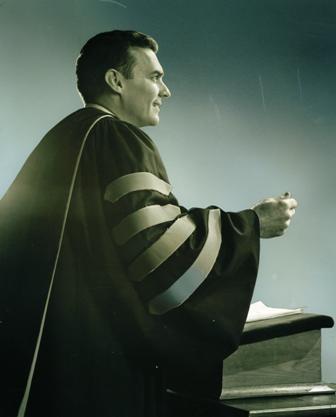 Paul Hardin was president of Wofford College for only four years, but his administration saw significant changes in student life and in the campus culture. Hardin helped put in place a number of campus policies that remained in effect into the 21st century, and he carefully navigated the college through a tumultuous era.

Born on June 11, 1931 in Charlotte, North Carolina, Paul Hardin III was the son of Methodist minister and bishop Paul Hardin Jr. He graduated from Duke University in 1952 and from the Duke University Law School in 1954. Hardin served in the Army Counterintelligence Corps for two years, then practiced law in Birmingham, Alabama for two years. In 1958, he returned to Duke as a member of the law school faculty. Hardin became active in Methodist Church activities, serving as associate lay leader of the North Carolina Annual Conference and as a delegate to the 1968 General Conference. He was elected the eighth president of Wofford College on October 31, 1967 and assumed office upon the retirement of President Charles F. Marsh on September 1, 1968.

At 37 years of age, Hardin was younger than all but two of his predecessors. Hardin worked hard to relate to students and faculty members. He adopted a presidential style, giving “state of the college” addresses and holding conversations with students. Hardin never shied away from controversy, and as a lawyer, argued his positions with students, faculty, and alumni whenever challenged. During his four years in office, he faced more than his share of controversies. He promoted adoption of an open speakers policy that allowed an invitation to be extended to any speaker as long as that person agreed to answer questions. Hardin’s dean of students, Donald J. Welch, proposed a student-led Residence Hall Education Program (RHEP) that focused on discussion groups in the residence halls.

Student life underwent substantial changes during the Hardin administration. A new campus union replaced the old student senate as students wrote a new constitution to govern the student body. A new student judicial system was created to enforce a new code of conduct, the Code of Student Rights and Responsibilities. The new judicial system had many of the characteristics of an adversarial court system. The code was part of a move toward more openness on campus, guaranteeing free expression but making students responsible for their activities. At the same time as the student code was being re-written, Hardin and the trustees modified the college’s alcohol policy to allow students of legal age to consume alcohol on campus. This decision generated more mail than any decision since desegregation. Hardin explained to parents and others that the decision was part of a plan to place greater responsibility in the hands of students. These changes reflected a greater national trend of ending the practice of in loco parentis, which Hardin effectively dismantled while at Wofford.

These changes in student life reflected national trends, as did changing student attitudes toward the campus. The student affairs office announced that it would no longer enforce the system of “ratting” that had been the student-led period of freshman indoctrination during the 1950s and 1960s. Student publications such as the Old Gold and Black became more critical of the administration. Protests against the war in Vietnam appeared in the pages of the newspaper alongside stories about bands appearing on campus.

Hardin left Wofford in the summer of 1972, having been elected president of Southern Methodist University in Dallas. Hardin later served as president of United Methodist-related Drew University in New Jersey and as chancellor of the University of North Carolina-Chapel Hill, where he retired in 1995.