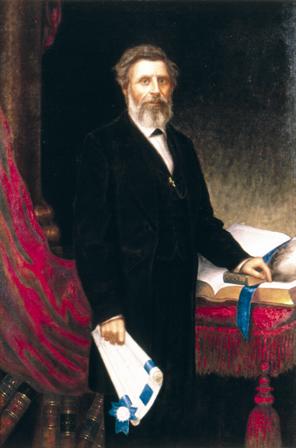 The man who led Wofford College through the Civil War and Reconstruction was a North Carolina native, a Methodist minister, and a historian of Methodism. Albert Micajah Shipp was born in Stokes County, North Carolina on June 15, 1819. A graduate of the University of North Carolina, he joined the South Carolina Conference of the Methodist Episcopal Church in 1841. Over the next six years, he served churches in Charleston, Cokesbury, the Santee Circuit, Cheraw, and Fayetteville. In 1847, he served as the presiding elder of the Lincolnton District, but when his voice began to fail, he turned to teaching. For two years he served as president of the Greensboro Female College, and in 1850, he joined the faculty of the University of North Carolina. There he taught English, French, and history. He remained a member of the South Carolina Conference during this time, and represented South Carolina at General Conference every four years from 1850 to 1886.

In 1851, he was named a trustee of Wofford College, and in 1853, the trustees elected him professor of English. He declined, preferring the heights of Chapel Hill to the shores of Lawson's Fork. In 1859, when President William Wightman resigned to take the presidency of Southern University in Alabama, the trustees again called on Shipp, and this time he accepted.

Shipp had been president for just over a year when the Civil War began, and he found himself presiding over a rapidly shrinking student body. By the fall of 1861, there were barely a dozen students on campus, and by the summer of 1862, only eight. Shipp, the other professors, and the trustees had to bend to changing circumstances to keep the college open, and over the next three years, only the presence of fitting school students kept the doors from closing. At the end of the war, the College had $85,000 in Confederate bonds, $1,200 in currency, and another $17,000 in bank stock, all of which was worthless. With the aid of the Annual Conference, the college was able to pay its faculty during the next few lean years. The alumni pledged to rebuild the ruined endowment, but by 1877, the financial agent estimated it was not worth more than $33,000.

Shipp's administration saw the first fraternities formed, when Kappa Alpha, Chi Psi, and Chi Phi came to campus. Religious revivalism was strong, and students organized in 1868 what would eventually become the campus YMCA. Students played the first baseball games on campus during Reconstruction, supposedly with Federal soldiers stationed in Spartanburg.

In 1875, Shipp resigned the presidency and moved on to Vanderbilt to teach in the theological department. He departed from Wofford angry with his successor, as he believed President Carlisle had dismissed Shipp's son, John Wesley Shipp, as principal in the preparatory department. Legend has it that Shipp would not speak to Carlisle as he left campus, or at a later point when the two met at Vanderbilt.

In his last three years there, he was the dean. However, he was forced to resign in 1885, Bishop McTyeire believing that he must have a dean of greater ability. He had written, at the request of the conference, a history of South Carolina Methodism, published in 1883. He retired to Marlboro County, took ill in 1887, and died on June 27, 1887 at Cleveland Springs, NC, where he had gone to recover from his illness.