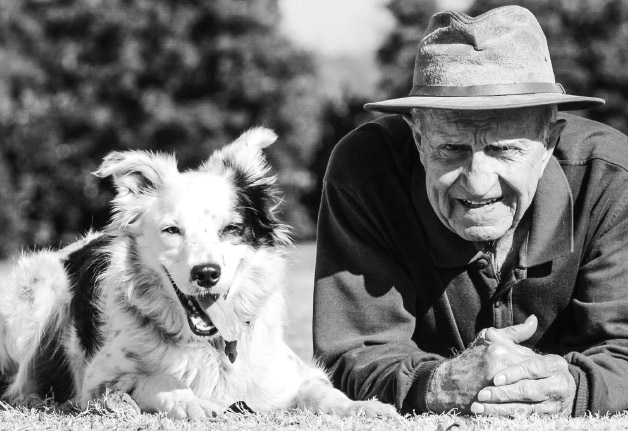 Just hours before Dr. John W. Pilley, professor emeritus of psychology at Wofford, passed away on June 17, his beloved border collie Chaser did something perhaps even more remarkable than receiving international acclaim as “the smartest dog in the world.” She barked.

“She was with him every day while he was in hospice,” says Bianchi, whose father had been diagnosed with leukemia. “She knew he was not well. Just hours before he passed, she uncharacteristically planted herself directly in front of his bed, stared at him and gave one very sharp, loud bark, continuing to stare at him. It startled us all, and we looked at each other in astonishment. It wasn’t ‘wake up;’ it was goodbye, and it gave us goosebumps.”

Pilley, who would have turned 90 in July, had done remarkable and astonishing things with Chaser throughout the years, giving the world empirical confirmation that dogs are not only as smart as we think, but they are cognitively capable of so much more.

Pilley’s passing was noted and his life was honored by large numbers of Wofford alumni, current students and “fans” around the world on social media and through emails to the college. NOVA on PBS, which had done a documentary on smart dogs that highlighted Chaser, noted his death on its Facebook page. Hill’s Pet Nutrition, with which Pilley and Chaser had a working relationship, posted, “… It was an honor and an inspiration to work with John. His deep understanding of what makes dogs tick, his dedication to the scientific process and his joy in connecting with animals will not be forgotten.”

Other recollections were brief but pointed. “What a contribution he made to this world. It’s a sad, sad day for Wofford Terriers. He will never be forgotten,” reads one. “Dr. Pilley was an amazing professor and had a deep impact on many lives -— mine included,” read another. Still another said simply, “So sad. So glad I felt his exuberance.”

Pilley had been a professor at Wofford from 1969 until his retirement in 1995. The college awarded him an honorary degree in 2016. Chaser accompanied Pilley on that occasion.

A lifelong athlete, Pilley was a competitive gymnast in college, and in midlife he became an expert wind surfer (something he did into his 80s) and whitewater kayaker. Several times he received one of the only 50 permits a year issued to elite kayakers by the National Parks Department for running the Grand Canyon rapids.

Pilley was born in the rural outskirts of Memphis, Tenn., on July 1, 1928. He graduated from Princeton Theological Seminary and became a minister in the Presbyterian Church.

At the age of 36, he left the ministry for graduate study in the psychology of learning at Memphis State University. In 1969, he became Memphis State’s first Ph.D. graduate, immediately joining the Wofford faculty. After retirement as an emeritus professor, Pilley worked with student-athletes on performance psychology. Wofford, in turn, made its facilities available to Pilley for his research with Chaser.

That research, in collaboration with Wofford psychology professor Dr. Alliston Reid ’75, was published in the Elsevier Journal of Learning and Motivation. The research led to international recognition for Pilley and Chaser, and they made appearances on national television programs such as the “TODAY Show” and “60 Minutes with Anderson Cooper.” The pair was featured in numerous national and international print publications.

Pilley co-authored The New York Times bestseller “Chaser: Unlocking the Genius of the Dog Who Knows a Thousand Words” with Hilary Hinzmann. At the time of his death, he was working on his second book with Deb Pilley-Bianchi and Julie Hecht, a canine specialist with Scientific American, on how you can teach your dog the same way he taught Chaser. He firmly believed there could be a world of Chasers. Pilley-Bianchi says the book will be completed as part of Pilley’s legacy.