Wofford students put siding on a Habitat for Humanity house being built in Chesnee, S.C. The students worked on two Habitat houses in Spartanburg County over Interim.
2022-02-03

Isa Ortiz Calzada ’24 never had a doubt about the Interim experience she wanted this year. 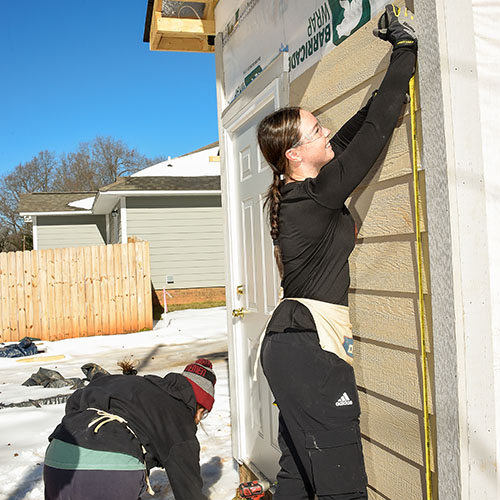 “I grew up in government-assisted housing,” Calzada says. “Being able to help somebody who is in that position is an amazing experience. It helps you to really appreciate what you have.”

Habitat for Humanity partners with communities around the world to help people in sub-standard housing build or improve their homes. Habitat homeowners help build their own homes alongside volunteers and pay an affordable mortgage. The Spartanburg affiliate has built 147 homes in 34 years.

Dr. William DeMars, professor of government and international affairs, says the Interim course comes at an opportune time for Habitat.

“This is of value to Spartanburg Habitat because it’s tough to find volunteers to come out at 8:30 in the morning in January,” he says. “These students work on the houses seven hours a day for three days a week in January. Then two days a week we study problems of affordable housing in the classroom.”

This is the second time DeMars has led the class. In addition to helping build houses, students also learn about the environmental footprint of the house, see how an energy-efficient house is designed and constructed, and study the problem of energy conservation in new and remodeled buildings. They also discuss the issue of affordable housing in Spartanburg and across the country.

Brody Taylor ’24, an undeclared major from Trussville, Alabama, took the course because he wanted to lend a helping hand while learning some new skills. He says he accomplished both.

“I’m a fish out of water,” Taylor says. “I’ve definitely picked up some things that will be helpful when I own my own home. Plus, it’s just a nice way to give back to the community. We’re doing some good work for Habitat for Humanity.”