Wofford, Spartanburg to get sneak peak of a play that’s making its world premiere in 2023 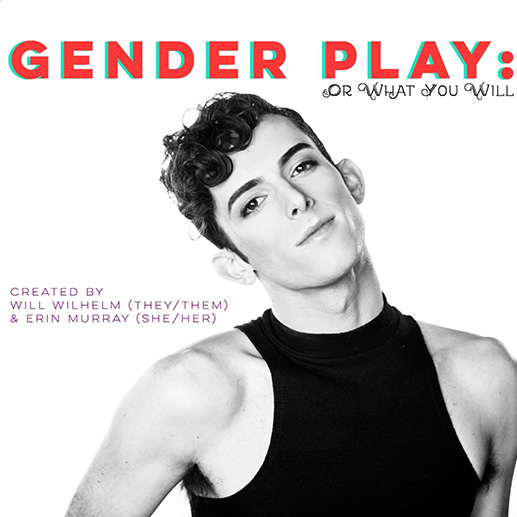 A performance of “Gender Play: Or What You Will” will be performed at Wofford College on Nov. 16 before making its world premiere in 2023.

A unique opportunity will be available for the Wofford College and Spartanburg communities when “Gender Play: Or What You Will” is performed Wednesday, Nov. 16 on campus.

It’s a one-person performance featuring Will Wilhelm, the play’s co-creator, who conjures the spirit of Shakespeare to examine Shakespeare’s works through Wilhelm’s own queer perspective and life experiences. The play will make its world premiere on stage in Chicago, Illinois, in the spring of 2023. The Wofford performance will give the audience an opportunity to stick around for a talkback with Wilhelm and co-creator Erin Murray to ask questions and provide creative feedback.

“The audience will be part of a catered talkback after the show to ask questions and give their own thoughts,” says Maya Fein, a Wofford assistant professor of theatre. “The final version of the show will be altered by what happens in that theatre. So often, we study what has already been written. This is an opportunity to impact the story.”

The play will be performed at 6 p.m. on Nov. 16 in the Sallenger Sisters Black Box Theatre in the Rosalind Sallenger Richardson Center for the Arts. Advance registration is recommended.

Emmy Monteverde ’24, an English major from Easley, South Carolina, will read the play’s stage directions during the performance.

“This one night only developmental performance will be an iteration of ‘Gender Play’ that will never exist again afterwards,” Wilhelm says.

Wilhelm and Murray also will participate in two other events while visiting Wofford for the performance, including a Tuesday, Nov. 15, luncheon titled “Cultivating Queer Spaces and Queer Futures,” and an event that evening, “Workshop: Olivia Loves Cesario! Gender as Performance in Shakespeare.”

All the events will focus on gender.

“Gender is simultaneously an extremely important and extremely banal topic to discuss,” says Wilhelm. “Its banality comes from its very everyday nature. Many of us are not thinking deeply or critically about our gender for very many hours of the day. Its incredible importance comes from the fact that these topics have been weaponized in our unequal society.”

Murray and Wilhelm are longtime colleagues of Fein’s. They met at Northwestern University about 10 years ago. Wilhelm was pursuing a Bachelor of Arts degree in theatre, and Fein and Murray were each earning a master’s in fine arts. Murray and Wilhelm have worked together professionally over the years. When Fein learned that Murray and Wilhelm were developing “Gender Play,” she applied for a cultural affairs grant and funding from the college’s Office of Equity, Diversity and Inclusion to support their visit to campus.

Murray’s directing career has spanned from Seattle, Washington, to the United Kingdom. Her work often focuses on women and reimagines the historical canon. She was featured on the 2020 Kilroy list for her queer adaptation of “Cyrano de Bergerac.”

Wilhelm was the first openly non-binary actor to join the company of the Oregon Shakespeare Festival, which is the largest Shakespeare center in the United States. Wilhelm’s work has focused on queer storytelling and representation for trans and non-binary people from new works to Shakespeare to musical theatre. Wilhelm has worked with some of the most notable directors in the United States, including Mary Zimmerman, Bill Rauch and Young Jean Lee. They have worked from coast to coast but are based in Chicago, where their credits include work at the city’s Goodman and Steppenwolf theatres.

Fein looks forward to hosting them.

“I envision a diverse audience of students, faculty, staff and community members who want to engage with topics of theatre, Shakespeare, gender and queerness,” Fein says. “I’m hoping the events will also provide a space where students can be connected who haven’t had the opportunity to yet. Regardless of how anyone identifies, I hope everyone feels that we’ve created an inclusive and thought-provoking space.”