SPARTANBURG, SOUTH CAROLINA—David Beacham, a 1977 graduate of Wofford College and secretary to the college’s board of trustees and senior vice president for administration, delivered the keynote address during the college’s 168th Commencement Exercises today (Sunday, May 22, 2022) on the lawn in front of Main Building.

During the event, the college awarded 374 Bachelor of Science and Bachelor of Arts degrees to 357 graduates. The college also conferred honorary degrees on three individuals: Dr. Michael A. Dirr, Alexandra Nunez and Dr. Leo Franklin Twiggs.

Biographies of major award winners are below. 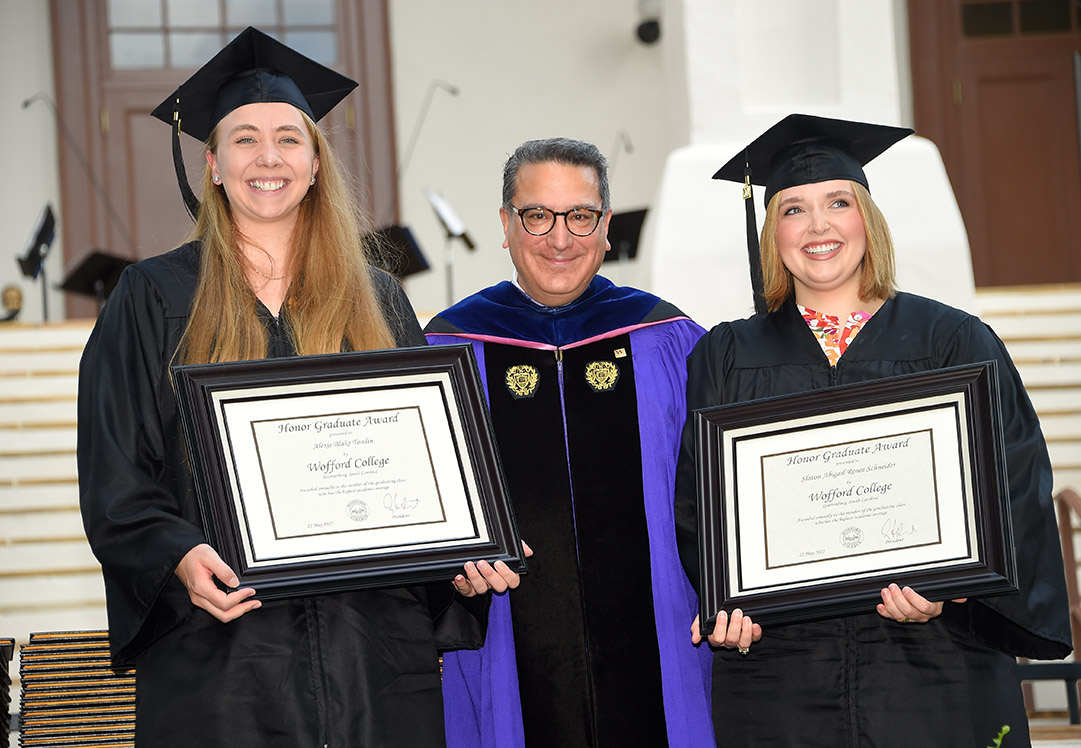 Two Honor Graduates were recognized for earning a perfect 4.0 GPA throughout their college careers. 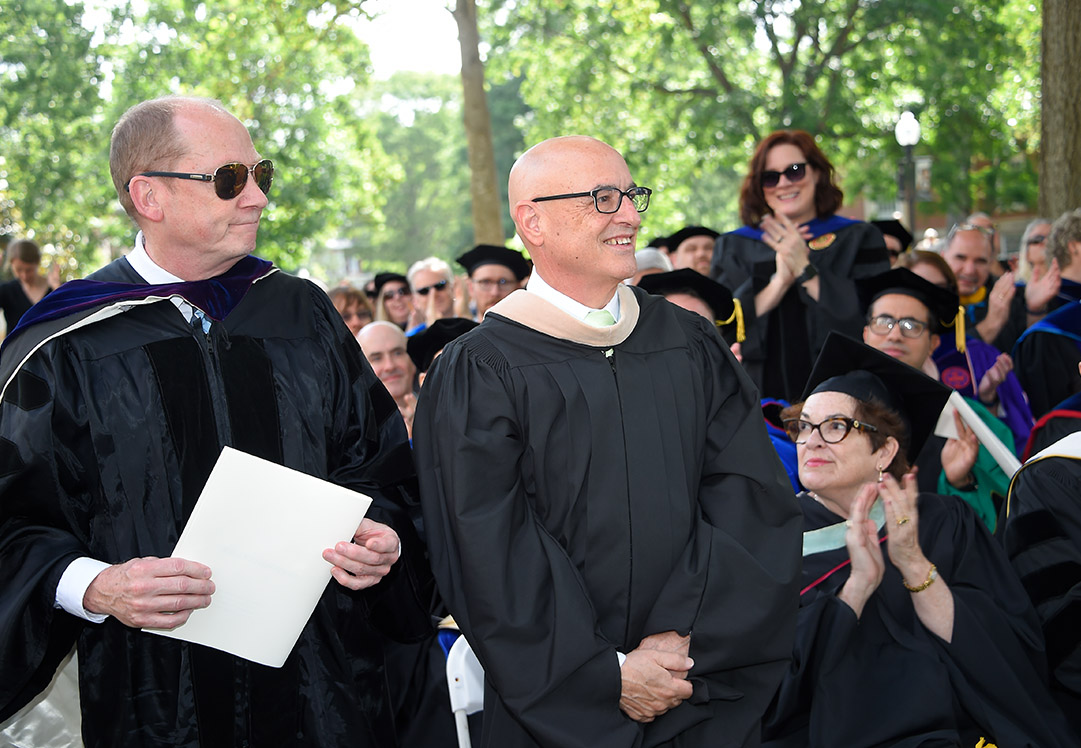 The college also recognized seven students who were commissioned as second lieutenants in the U.S. Army on Saturday, May 21. They are: 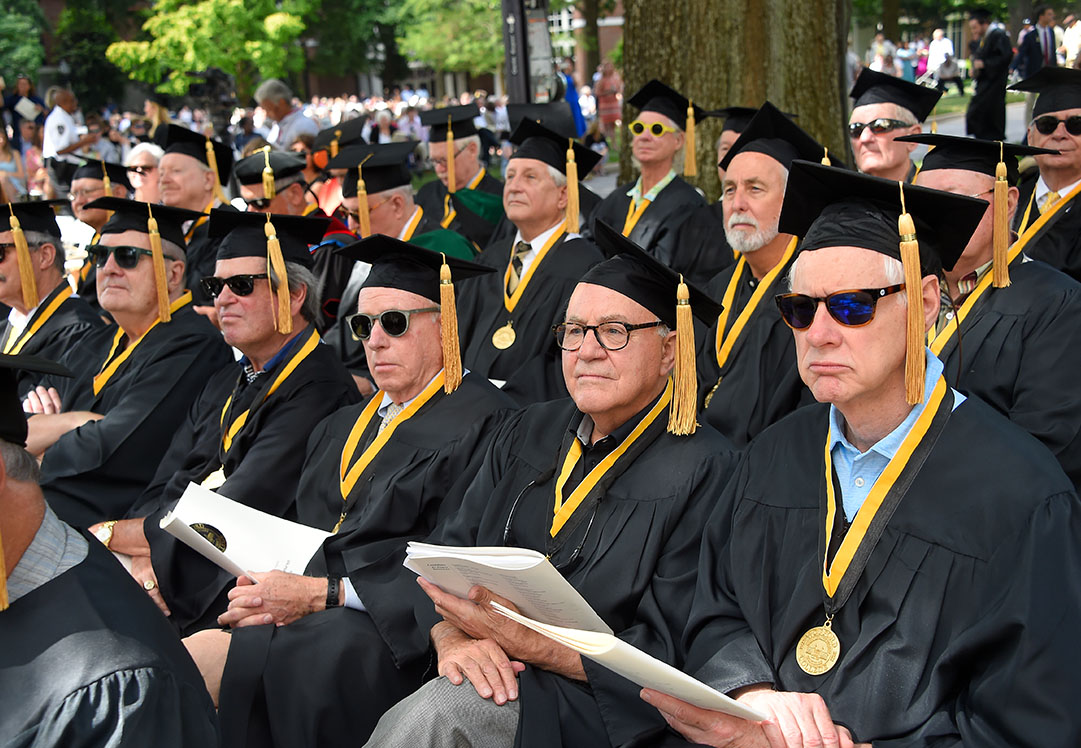 Members of Wofford College’s Class of 1972 celebrated their 50th reunion during Commencement weekend. 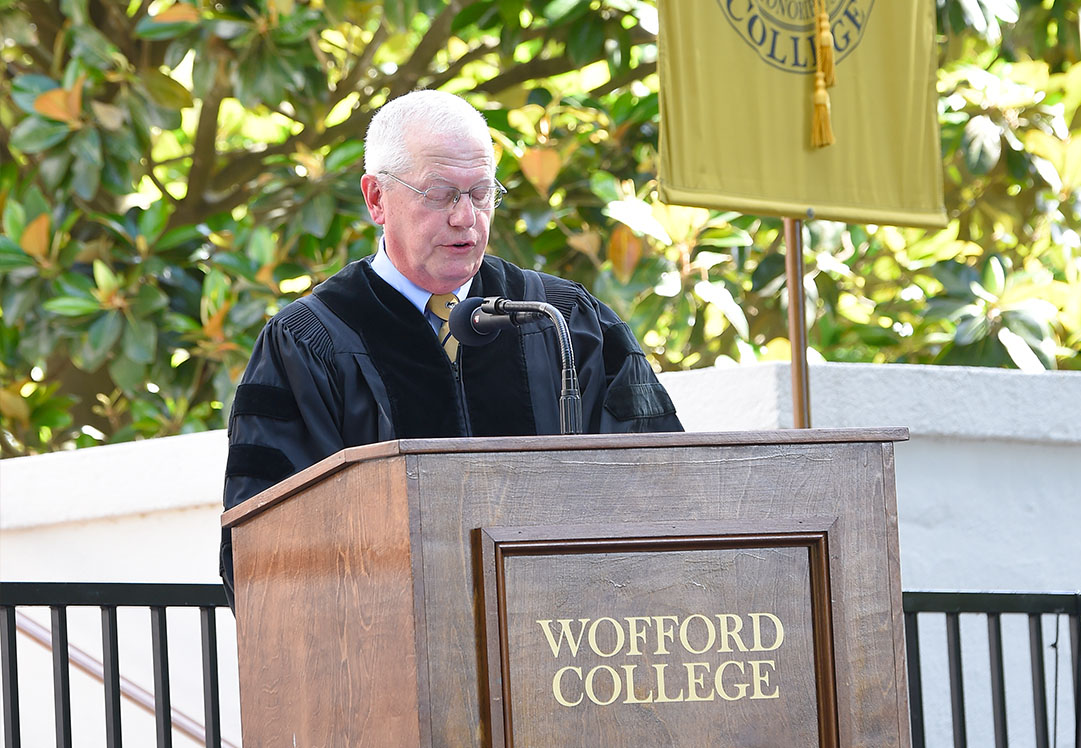 For over four decades, David Beacham has been a key member of the Wofford College administration. He began his career at Wofford shortly after completing his bachelor’s degree there in 1977. His work has included service on the admission and advancement staffs, including 12 years as chief advancement officer, during which time he oversaw a successful $90 million campaign, the largest achieved by the college up to that time.

Since 2002, Beacham has been secretary to the Wofford College Board of Trustees, in addition to being senior vice president for administration. He has served three different presidents at Wofford, and in his current role was the main liaison between the college and the Presidential Search Committee. He continues to serve President Nayef Samhat, who took office in July 2013. At Wofford, Beacham has staffed searches for provost, chaplain and several vice presidencies, including marketing/communications and advancement. He also is an important link within the college’s relationship to the United Methodist Church.

Beacham is committed to civic and church activity in Spartanburg, having served on the boards of Partners for Active Living (chair), the Piedmont Chapter of the American Red Cross (chair), St. Luke’s Free Medical Clinic and Habitat for Humanity. He currently serves on the board of the Cancer Association of Spartanburg and Cherokee Counties. He is a member of the Board of Governors of The Piedmont Club, chairs its membership committee and is currently the club’s vice president (president-elect). Serving as a church leader is of signal importance to Beacham; he has served as elder and deacon at First Presbyterian Church of Spartanburg, where he has chaired numerous committees, campaigns and projects. He most recently chaired the senior pastor nominating committee.

Beacham has been married to Cynthia Corbett Beacham for 41 years. Beacham was awarded the Order of the Palmetto, South Carolina’s highest civilian honor, during his final meeting with the Wofford Board of Trustees earlier this month. He is retiring this summer. 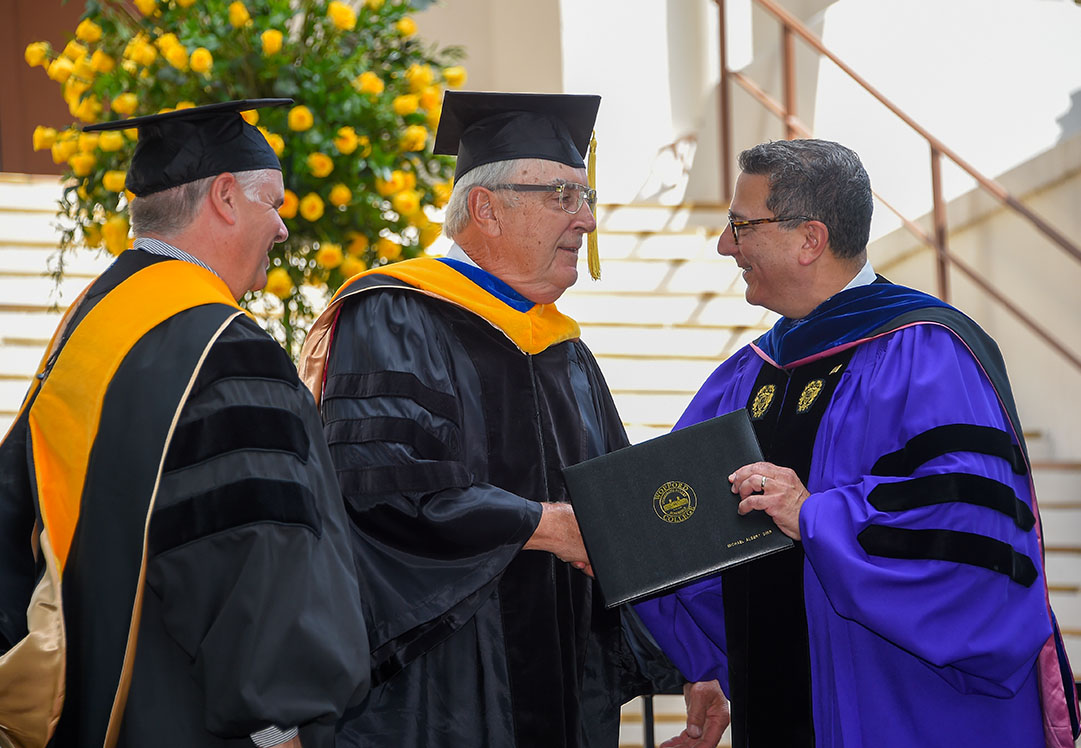 Dr. Michael A. Dirr is considered a legend in the horticultural world and is recognized for his energy for teaching, writing and growing plants. Dirr, professor emeritus of horticulture at the University of Georgia, began advising Wofford College on horticulture with a special emphasis on the planting of trees. He was introduced to the college by Wofford Trustee Emeritus Roger Milliken.

In November 2002, Wofford’s campus was designated as a national arboretum. Dirr helped the college place more than 4,000 trees across campus over several years.

Dirr earned bachelor’s and master’s degrees from The Ohio State University and a Ph.D. in plant physiology from the University of Massachusetts. He has published more than 300 scientific and popular papers and articles. His book, “Dirr’s Hardy Trees and Shrubs” sold over 500,000 copies and counting. His influence in the world of horticulture has been profound. It is Wofford’s great fortune that he was brought to the college to help develop the campus into the showplace that it is today. 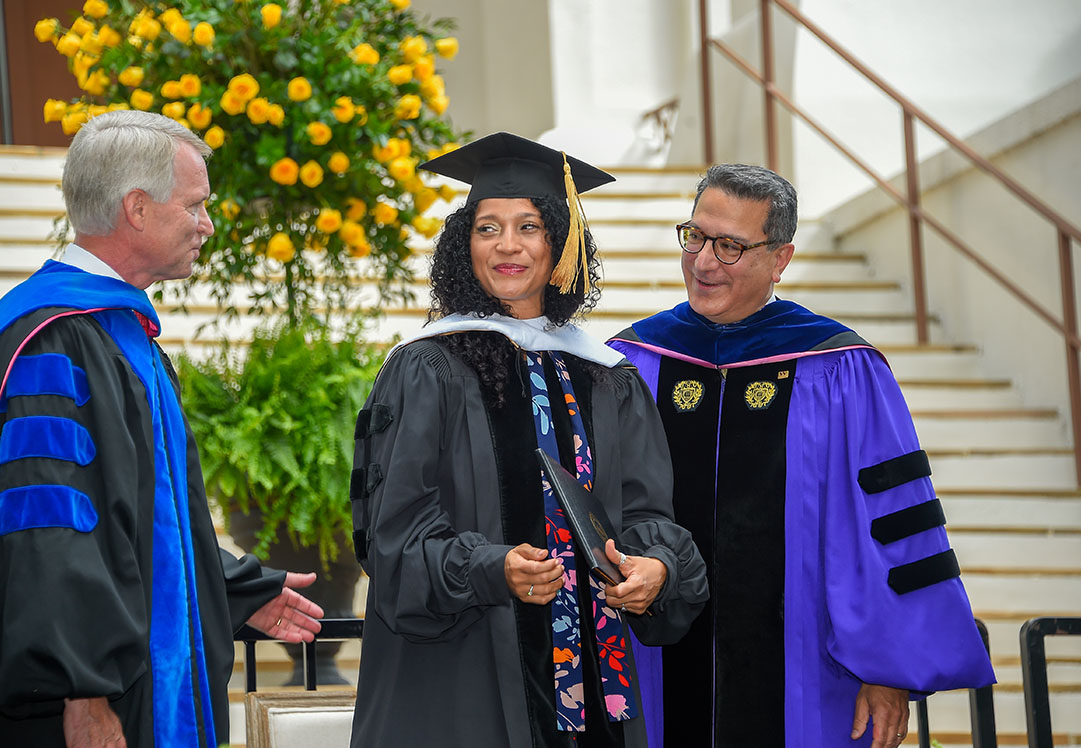 Alexandra Nunez is the president and CEO of Esperanza, a microfinance institution in the Dominican Republic that serves entrepreneurs, women, families and children. Seven years ago, Wofford College formed a 10-year partnership with Esperanza in which the James-Atkins Student-Managed Investment Fund provides $7,000 annually to Esperanza for making microloans in the Dominican Republic. Esperanza provides local knowledge and expertise that’s coupled with Nunez’s knowledge, skill, experience and commitment to transform poverty alleviation measures. Wofford’s student investors are learning how to experience leveraging their wealth creation ability in the United States to have a significant impact abroad. 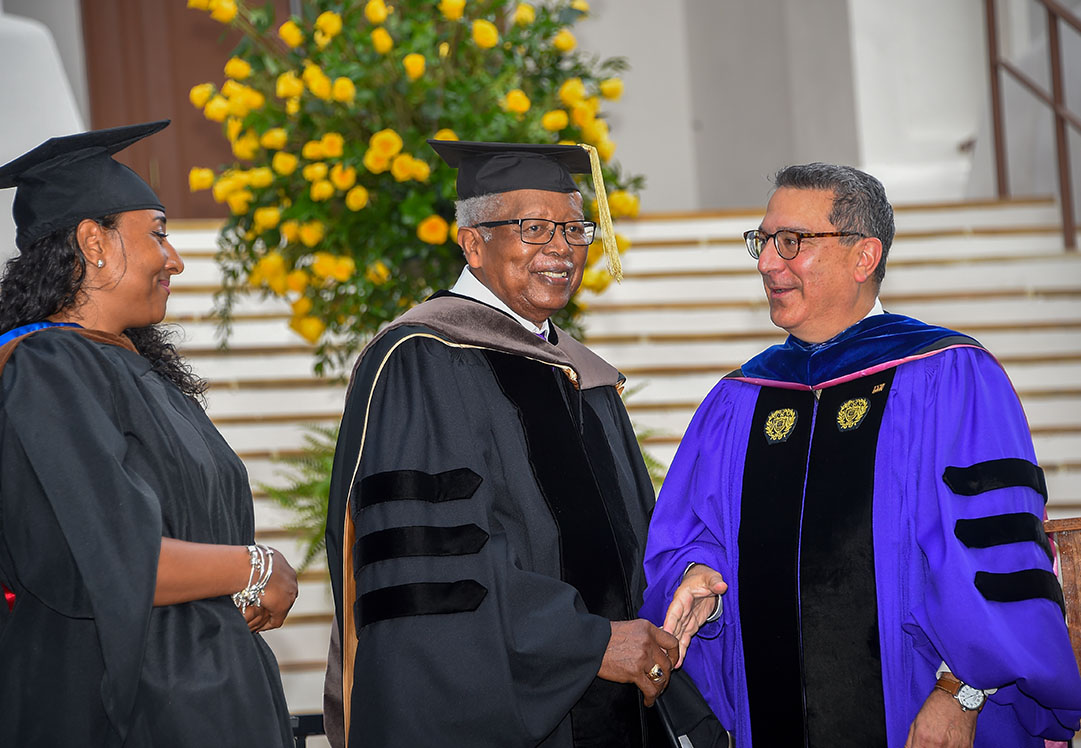 Leo Franklin Twiggs is one of South Carolina’s most distinguished and talented citizens, a supremely talented and well-recognized artist who works in the medium of batik, a process of wax-resist dyed cloth of Indonesian origin.

In 2021, Twiggs curated the exhibition “Elevation from Within: The Study of Art at Historically Black Colleges and Universities,” comprised of artwork from the Johnson Collection.

Professor Diane Farley, Philip Covington Award for Excellence in the Teaching of Humanities 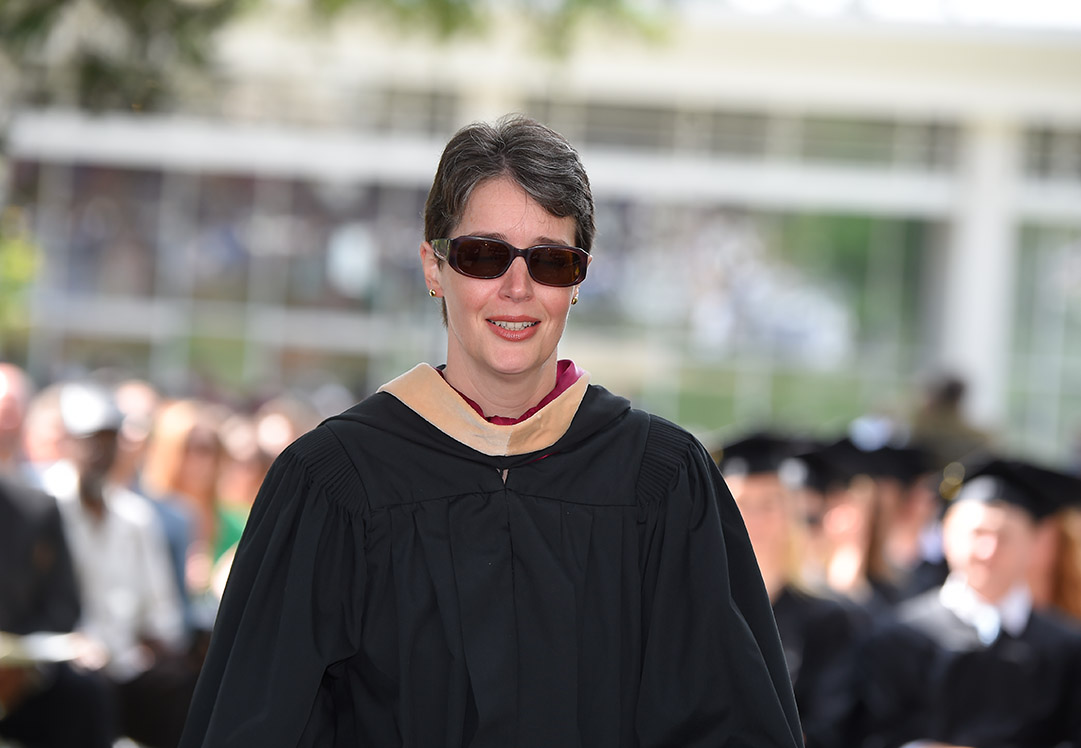 Diane Farley, assistant professor of accounting, is the college’s 16th recipient of The Philip Covington Award.

Diane Farley, assistant professor of accounting, is the college’s 16th recipient of The Philip Covington Award. Diane Farley makes students and the student experience her top priority. She teaches some of the most difficult classes in the department and is committed to advising both first-year students and majors. She also serves on several faculty committees and manages the department’s Accounting 211 Lab, selecting and training peer tutors. The award is named after a beloved, long-time professor and academic dean. It carries with it a $15,000 award, allocated over a period of three years, designed specifically to provide further opportunities for professional development.

Dr. Joseph Spivey, Roger Milliken Award for Excellence in the Teaching of Science

Dr. Joseph Spivey, associate professor and chair of the department of mathematics, is an innovator in the classroom. He co-authored an interactive mathematics textbook currently used by the department and is an adopter of inquiry-based learning. He gets the big picture and how the sciences and humanities are both critical to the liberal arts experience. He is dedicated to excellence and his students and is relentless in his pursuit of innovation. Spivey is the college’s 18th recipient of this award, whose recipient is chosen by a special secret committee, and receives an award of $50,000 allocated over a decade designed to provide opportunities for professional development. 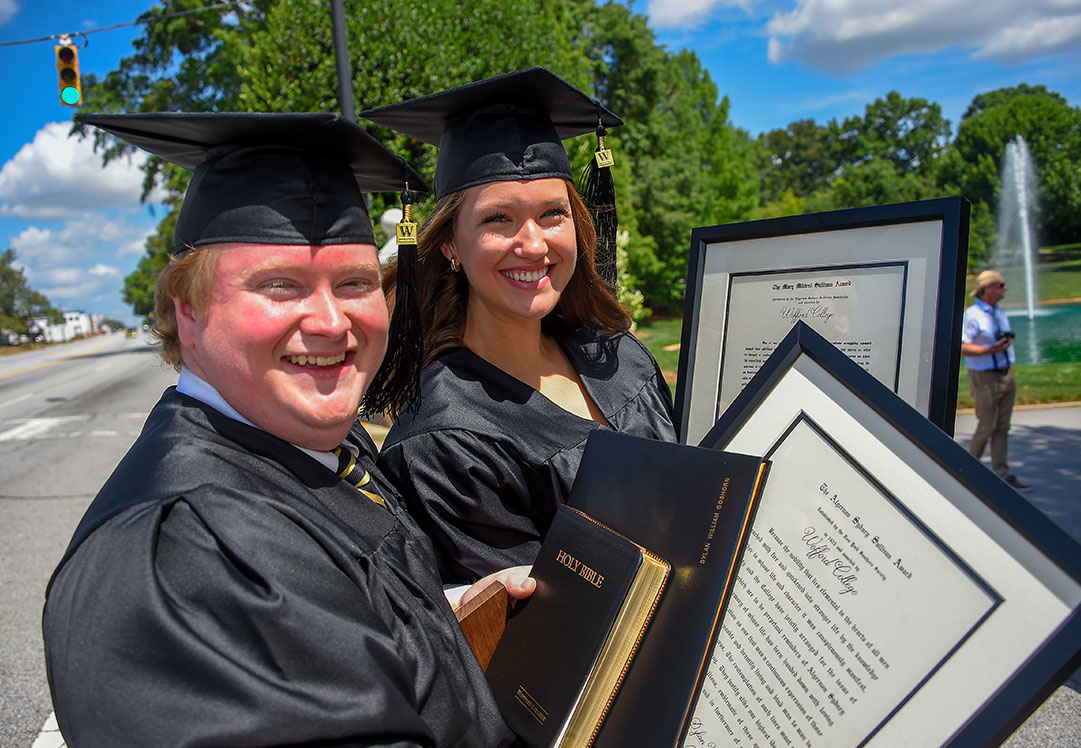 Dylan Goshorn and Jana Marie Faircloth were the 2022 student recipients of the prestigious Sullivan Awards.

Jana Marie Faircloth is an accounting major from Sumter, South Carolina. Dylan William Goshorn is an international affairs and philosophy major from Harleyville, South Carolina. They have both led the Wofford community by example, and honor Wofford College and the Sullivans by accepting these awards. 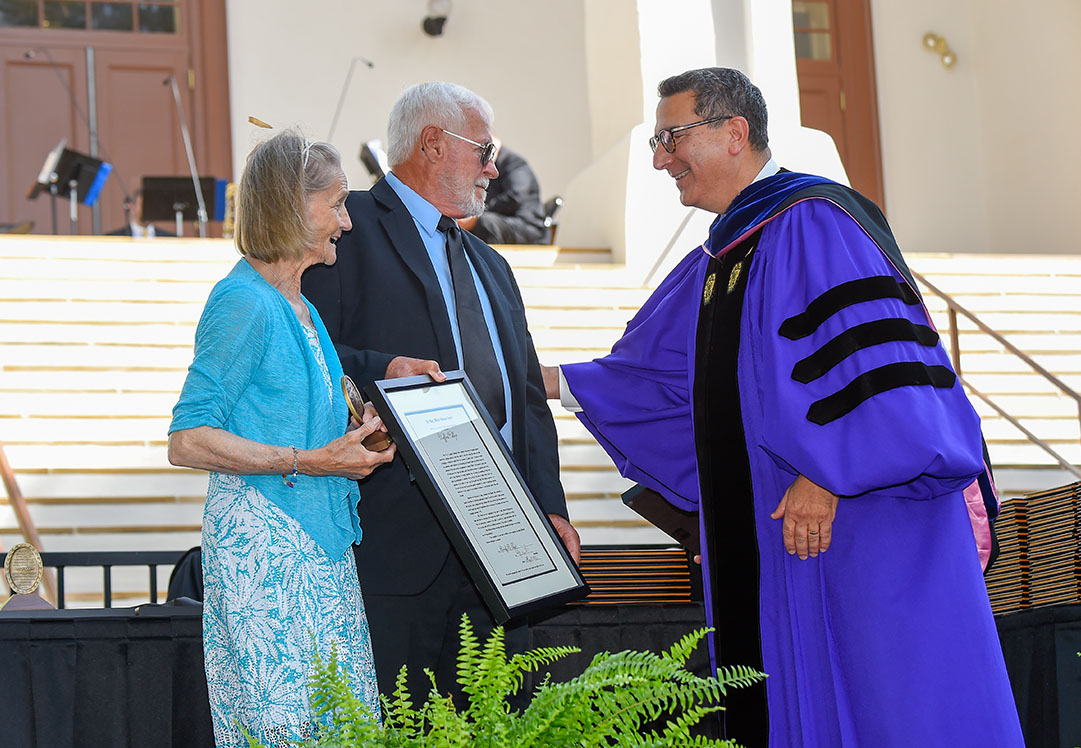 Beverly and Harold Page were Wofford’s 2022 community recipients of the Sullivan Awards for their contributions to Spartanburg. Wofford President Nayef Samhat presented them with the awards.

Beverly and Harold Page, along with the volunteers they lead, have been leading efforts as master gardeners and humanitarians in Spartanburg to provide thousands of pounds of fresh vegetables during the summers to Meals on Wheels, the Spartanburg Soup Kitchen, the Children’s Shelter, Miller House and Miracle Hill.