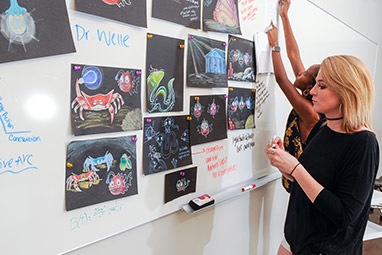 SPARTANBURG, S.C. — What started as a conversation about teaching quantum physics to non-science majors has turned into a children's book project and an interdisciplinary summer research experience for three Wofford College students and three members of the faculty.

"Physics is all about interactions," says Martsberger. During lunch she and her colleagues found themselves discussing how the interactions found in scientific processes — between energy and matter, for example — match the values and virtues found in everyday human interactions. They decided to challenge themselves and three student researchers to use that commonality to explain the photoelectric effect.

"There are physical systems that take a long time to create and build; a glass house, for example, takes a long time to create, but a rock can quickly break it. Trust can work like that as well," says Martsberger. "Our goal is to use the analogy of interpersonal dynamics to teach a physical phenomenon so that the elegance of physics is accessible to a wide audience."

Martsberger is advising the project physicist, Jake Phillips, a senior physics and German major from Huntersville, N.C. Phillips is charged with explaining light in a way that is both understandable and entertaining to a first- or second-grade audience.

"When I was explaining the concepts to the writer and illustrator, I tried to take all of the scary physics phrases out — like ‘work function,’ I didn't really want to get into explaining that — and instead talked about the concept in terms of energy."

Hall advises Kyla Burwick, the book's author, a junior English major with a film and digital media concentration from Blythewood, S.C. Although Burwick has never written a children's book, she has embraced the opportunity and has even involved her family.

Scott-Felder serves as the artistic advisor to the book's illustrator, Laura Hydrick, a junior biology and studio art major from Chapin, S.C.

"As we've worked together, the characters and images have evolved, but so have we," says Hydrick. "We've learned so much this summer."

Martsberger says the students have done a remarkable job of using physics words and concepts in unexpected ways. They've added a richness of content that reveals something new with each reading.

Scott-Felder is pleased with the content, strong characters and powerful images emerging from the pages. "The students are working from their strengths," and creating a book that "has integrity and is true to the natural world," she says.

According to Hall, the group spent the first few weeks sharing the results of a literature survey of other children's books and learning about the expertise that each person brings to the project. Phillips, Burwick and Hydrick each designed and taught labs that transported the team deeper into their individual fields of study, initiating connections across disciplines.

"We all share a passion for interdisciplinary collaboration — the benefits of that and even the challenges," says Hall. "The students are directing their own work and learning what it means to take on a large-scale project like this. As advisors, we are here to help steer their research, answer questions and offer encouragement."

The project already has been a teaching tool for the Wofford students and professors working on it this summer, but the team of scientists, writers and artists wants more — a published book that transcends science and offers a fun read for families.

"The writing is beautiful, and it's interesting to see how the story of light plays out on each page," says Martsberger. "We want this to be a stand-alone story with character development, conflict and resolution. We want it to be enticing so children will want to pull it off the shelf.”