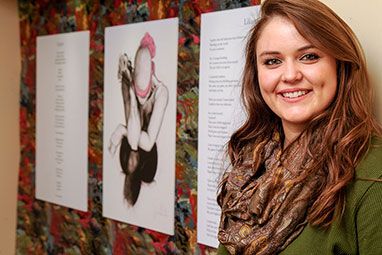 Michelle Merritt ’15 remembers walking into her parents' room as a 10-year-old and hearing them in the adjoining bathroom. Although she couldn’t see them, she could tell that her mother was crying. It was during Liliana Merritt’s second bout with breast cancer; the first was when Merritt was just 3.

Although Merritt turned around and never spoke with her parents about the tearful moment she overheard, the memory remained so vivid that years later she put herself into her mother’s shoes and turned it into a poem, “Liliana,” part of her senior medical humanities capstone project at Wofford.

“Because I was so young when my mom was diagnosed with cancer, I didn’t really ask her a lot of questions,” says Merritt. “I made up for it this fall.” Merritt, a biology major with a concentration in medial humanities, wants to become a pediatric oncology nurse practitioner. Although she’s fascinated by the medicine, she’s been as intrigued by the feelings generated by a cancer diagnosis.

In addition to gathering facts regarding the disease — diagnosis, procedure and chemicals used to treat the cancer — Merritt delved into emotional responses. Each chapter in her medical humanities thesis represents a different perspective: the doctors, her mom, dad and older brother.

“Each chapter assumes a distinct voice in my mother’s journey,” says Merritt. “They contributed to her successful progression and ultimately influenced mine.”

Dr. G. R. Davis, Wofford professor of biology and Merritt’s medical humanities adviser, knew that in addition to studying biology, Merritt has written poetry since high school. As they met weekly to talk through the planning and progress of the project, he noted that her voice was absent and encouraged her to put her memories, thoughts and feelings into poetry.

“Could you write as if you were the cancer inside your mother?” Davis leaned across the desk and asked during one of those meetings.

Merritt’s poem, “Cancer,” from the perspective of the disease, was so powerful that Davis now has it, the poem “Liliana,” and a sketch drawn by Josh Holt ’14 on display in the Roger Milliken Science Center (Glass Case Gallery on the first floor).

“Here we have two student-athletes — Michelle who plays women’s basketball and Josh who played football — working together and pursing interests outside of their regular course work,” says Davis. “It’s nice to be able to do medical humanities here at Wofford, where a student like Michelle can combine her love of language and poetry with science.”

Merritt gives Davis lots of credit for the passion she put into her capstone. She also is quick to thank Dr. Ellen Goldey (biology), Dr. Charlie Bass (chemistry) and Dr. Carol Wilson (English) with helping her craft, review and present her capstone.

“Articulating my family’s journey has been rewarding, and I appreciate everyone who helped make that possible,” says Merritt, who showed her parents the poems and drawing when they were on campus for a recent home basketball game (although they live in Miami, Fla., the Merritts come to almost every home game).

“We were all in tears,” says Merritt. “My mom said, ‘Michelle, I’m so proud of you. I only hope this journey is mine and never yours.’”

According to Merritt, however, they both know that the odds say otherwise.

“Every woman in my family has had breast cancer,” says Merritt. “Ironically enough, my mom had the genetic test, and it came back negative.”

Merritt, who has raised funds for breast cancer research since she was in middle school, now advocates for early detection as well. She believes sharing her capstone will do that.

“Sharing our story isn’t about pity, but about empowering women and men who have breast cancer to stay positive and hopeful. If they do that, they can get through it. My mom is a testament to that,” says Merritt.