SPARTANBURG, SOUTH CAROLINA—Shawan Gillians, a 2004 Wofford College graduate and a member of the college’s Board of Trustees since 2020, delivered the keynote address during the college’s 167th Commencement Exercises today (Sunday, May 16, 2021) at Gibbs Stadium.

During the event, the college awarded 364 Bachelor of Science and Bachelor of Arts degrees to 350 graduates. The college also conferred honorary degrees on three individuals: James E. Bostic, Dr. William B. Gravely and Dr. Steven A. Skinner.

Six Honor Graduates were recognized for earning a perfect 4.0 GPA throughout their college career.

Biographies of major award winners are below.

During Commencement exercises, the college also recognized students who were commissioned as second lieutenants in the U.S. Army on Friday, May 14, and who will be serving the United States after graduation. They are:

Gillians is a native of Moncks Corner, where she was raised along with her younger brother, Jermaine, by their parents Thomas and Susan Gillians. As a result of growing up in a modest community, she saw the needs of others firsthand. She was drawn to service early in life through events sponsored by her church. She continued to seek opportunities to serve throughout her educational career as a member of service organizations such as Beta Club, Lions Club and the Twin Towers organization at Wofford College. Gillians remains active in her community.

She was elected to the Wofford College Board of Trustees in 2020 after having served on the college’s President’s Advisory Council. She’s also a member of the Young Philanthropist Society of the Trident United Way and the board of trustees and the finance committee for the Coastal Community Foundation.

Gillians is a senior warden of the vestry of St. Mark’s Episcopal Church in Charleston, South Carolina. She is a graduate of The Riley Institute at Furman University and Diversity Leadership Initiative, and is an Aspen Fellow and member of the Liberty Fellowship’s class of 2018.

James E. (Jim) Bostic spent most of his career in the textile and paper industries while providing leadership and service to higher education institutions, including Wofford College. A White House Fellow in 1972-1973, Bostic joined the U.S. Department of Agriculture as deputy assistant secretary of agriculture and served until 1977. He then began a successful business career, retiring in 2005 as executive vice president of Georgia-Pacific paper before coming out of retirement to partner in the Coleman Lew and Associates executive search firm in 2006.

Bostic received South Carolina’s highest civilian award, the Order of the Palmetto, in 1983. He was a member of the President’s Commission on White House Fellowships for 25 years; the S.C. Commission on Higher Education, including chairmanship for five years; and the State of Georgia Board of Education for nine years. He served on the Progress Energy Inc. Board of Directors for 10 years and on the Tuskegee University Board of Directors for 14 years.

Dr. William B. (Will) Gravely graduated from Wofford College in 1961. He majored in history and served as a Glee Club accompanist and football statistician. Gravely, a native of Pickens County, South Carolina, was among many in his family who became Wofford alumni dating back to 1927.

He earned a divinity degree from Drew Theological School before attaining a Ph.D. at Duke University in American religious and social history. He taught in the religious studies department at the University of Denver from 1968 to 2001. Gravely chaired the university’s doctoral program and was awarded the United Methodist Church’s University Scholar/Teacher of the Year Award in 1987.

From 1967 to 1995, Gravely built bibliographies in African American religious history. He authored “Gilbert Haven, Methodist Abolitionist” and published essays and reviews on U.S. religion and social justice scholarship. In 1981, he began a project using oral histories and conventional sources to reconstruct what is considered the last racially motivated lynching in South Carolina. The Harry Frank Guggenheim Foundation awarded him a grant from 1988-1990 to extend that research. In 2019, the University of South Carolina Press published his book “They Stole Him Out of Jail,” which focused on the 1947 lynching of Willie Earle in the outskirts of Greenville, South Carolina, and the unsuccessful trial of 31 men accused of killing him.

Dr. Steven A. (Steve) Skinner, a 1976 Wofford College graduate, is the director of the Greenwood Genetic Center. He is a clinical geneticist involved in the evaluation and treatment of children and adults with birth defects, intellectual disabilities and other genetic disorders. His areas of interest include Rett syndrome, Angelman syndrome, autism and intellectual disabilities.

Skinner has been actively involved in the treatment initiative of the center and was instrumental in the development of the South Carolina Center for the Treatment of Genetic Disorders. He is a principal investigator on the National Institutes of Health’s Rare Diseases Clinical Research Network’s Rett Syndrome Natural History Study and is involved in numerous clinical trials for patients with this neurodevelopmental disorder. 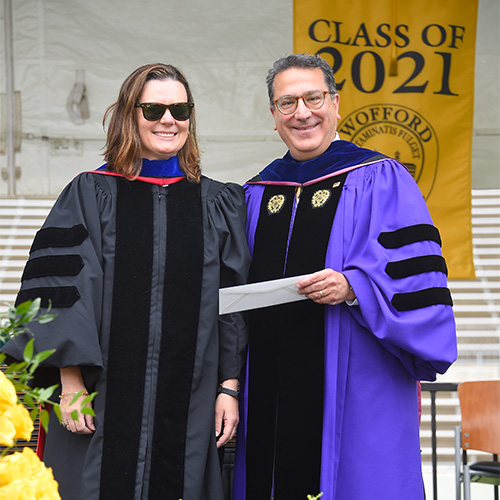 Dr. Catherine Schmitz—Philip Covington Award for Excellence in the Teaching of Humanities

Dr. Catherine Schmitz, professor of French, teaches courses in French as well as gender studies and is a proponent of exposing students to opportunities for study abroad and intercultural competence. Her fields of interest are women’s writings, women’s theater and travel literature. The award carries with it a $15,000 award, allocated over a period of three years, designed specifically to provide further opportunities for professional development. 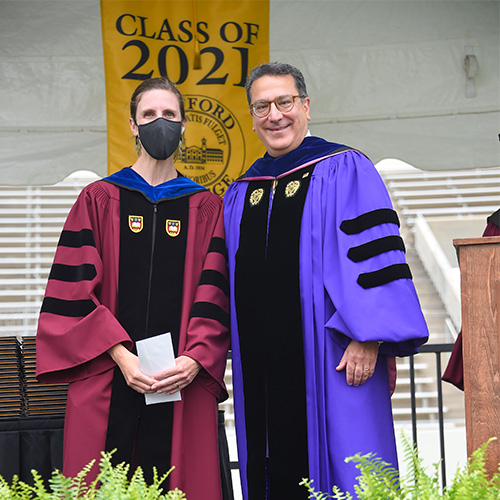 Dr. Katherine Steinmetz—Roger Milliken Award for Excellence in the Teaching of Science

Dr. Katherine Steinmetz teaches courses in psychology and neuroscience. Her research focuses on understanding the neuroscience behind how emotion processing influences attention and memory. She runs her Wofford research laboratory like one at a graduate research institution. The award’s recipient is chosen each year by a committee of scientists and business executives from outside the college. The award carries with it $50,000 allocated over a decade designed to provide opportunities for professional development.

Matthew Newton and Price Rainwater were the student recipients of the Algernon Sydney Sullivan Award and the Mary Mildred Sullivan Award.

Matthew Newton is a government and environmental studies major from Santee, South Carolina, who plans to pursue a master’s in public administration. He is a 2021 Phi Beta Kappa inductee. He did an Interim study abroad in Cape Town, South Africa, where he studied the causes and legacy of Apartheid and the AIDS epidemic. He did a personal research project examining Spartanburg’s Arkwright community and its sentiment toward environmental cleanup and community revitalization, and was a member of a research team conducting the initial stages of a research project examining the shared language of and partnerships between diversity, equity and inclusion groups in Spartanburg and on Wofford’s campus.

Price Rainwater is a biology major from Florence, South Carolina. She plans to attend the University of South Carolina School of Medicine. She is a 2021 Phi Beta Kappa inductee. Rainwater is one of two students receiving the Wofford College Department of Biology’s W. Ray Leonard Award and she’s a recipient of the college’s “Heart of a Terrier” leadership award, which is given to graduating seniors recognized for making a positive difference on campus while excelling in scholarship, leadership and campus citizenship and service.

Dr. Leland G. Close spent 34 years with Milliken & Co. and worked as a chemist, director of development and business development manager. He traveled to five continents with the company and accumulated a portfolio of 13 U.S. patents and two peer-reviewed publications. After retiring in 2013, he accepted the role of executive director of Habitat for Humanity of Spartanburg. The nonprofit aims to provide safe, decent and affordable homes to families who would not otherwise qualify for mortgage loans. The agency has increased the number of homes built per year from five to seven and has a target to reach 10 homes a year. Forty-nine Spartanburg Habitat families have completely paid off their homes.

Dr. Gloria W. Close is a former administrator with the University of South Carolina Upstate. She has actively worked to improve the lives of others since her days as a graduate student at North Carolina State University, where she taught 200 illiterate adults to read, write, obtain driver’s licenses and open bank accounts. Highlights of her work in Spartanburg include her being the executive director of the Citizen Scholars Program, which pairs elementary school children in Spartanburg County with mentors to provide guidance and encouragement to help students reach academic goals over seven years. She also created CAST (Care, Accept, Share and Teach), an initiative with First Presbyterian Church, to find better housing for school children living in motels. The project began in 2013 and it has provided camps for children to participate in activities such as gardening, first-aid training and field trips. CAST also provides school supplies and clothing for children. More than 100 children have participated in the camps.