Victoria Nwankudu to study impact of language on social movements 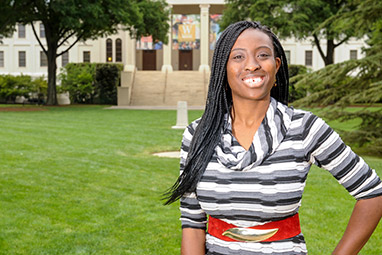 SPARTANBURG, S.C. – A major draw for Victoria Nwankudu to come to Wofford College was its outstanding study abroad program. Now, as the newly announced Presidential International Scholar, the sophomore from Florence, S.C., has the travel study opportunity of a lifetime.

Nwankudu, who is majoring in Spanish and international affairs, will travel to South Africa, Peru and Morocco to conduct independent research on the impact of language on social movements. She begins her world travels in late June.

The Presidential International Scholarship is an innovative program that allows one student to travel internationally to research an independent project. The scholar is selected by the president of the college as a student with exceptional potential to benefit humankind as evidenced by a demonstrated passion for service learning combined with a globally minded intellectual curiosity. The scholarship is funded by an anonymous donor.

“Victoria Nwankudu has an exceptional curiosity about the world around her, always asking questions and seeking knowledge about how we communicate and learn to live together,” Samhat says. “Through her research, she wants to learn how language impacts our relationships and responses to each other, thus our ability to grow toward global understanding. As the Presidential International Scholar, Victoria will take her curiosity out into the world to learn, but I believe she also will impact those people she meets along the way with her keen intellect, her capacity for understanding and her ability to communicate. We are proud to have her represent Wofford College on her travels, and we look forward to her sharing her experiences with the campus when she returns.” Nwankudu, who studied abroad in Buenos Aires last fall, says, “It’s good to be able to go abroad, but it’s harder to get opportunities to do research abroad, so being named the Presidential International Scholar is great. It’s cool.”

As for her research, Nwankudu says she became interested in the impact of language on social movements after a conversation her mother had with a friend in their native tongue, Igbo, one of the languages of Nigeria, where her parents are from. After her parents divorced, a family friend called Nwankudu’s mother to tell her how much she regretted the end of their relationship. “To do this, she recited to my mother, in their native language, a popular proverb of our people: ‘The worth of a woman is her husband.’” Listening to her mother angrily “rant” about the incident, she found she was not surprised by the friend’s attitude. “What did shock me, however, was the sudden realization that the word my auntie had used for ‘woman’ – nwinye – doubled in our language as the word for ‘wife,’” she says. “Then, I realized something else. Out of all of the words used in Igbo to express the idea of ‘husband,’ none of them were interchangeable with our language’s word for ‘man.’”

She wondered, then, how a movement for gender equality would appear to her family’s West African, clan-based tribe – her parents emigrated from Nigeria to attend school, eventually settling in Florence; she has a younger brother and younger sister, both adopted from Nigeria.

For her research, Nwankudu narrowed all those questions down to one: In what ways does language impact social movements?

Nwankudu chose her three countries of study – South Africa, Peru and Morocco – to study specific elements of that overarching question. “I chose South Africa to study the unique role language plays when an oppressed party is divided among itself into a myriad of different ethnic groups all bringing unique cultural, political and social experiences to the movement. By studying the most influential languages of the Apartheid era, I hope to understand how languages shape the methodology of social movements as well as the role language plays in uniting diverse peoples under the labels of ‘oppressor’ and ‘oppressed,’” she says. “I also hope that by analyzing media coverage from the period, I can draw conclusions about the role of language in similar movements, such as the Black Lives Matter movement, and the role technology could have played during Apartheid but now plays in similar movements.”

In Peru, Nwankudu’s research will center on the rights of indigenous people in post-colonial societies. “I chose Peru because 77 percent of its population is indigenous, with 45 percent being fully Native American and 37 percent being of mixed native European ancestry. Out of the country’s total indigenous population, one-third speak the indigenous language, Quechua.

Her study in Morocco will center on the Arab Spring revolutionary movements of the early 2010s. “I want to study how the unique relationship between religion and language is tested when a language, along with its religion, is twisted to meet the needs of a revolution,” she says. She points out that the Arab Spring movements took place in countries that are nearly all Arabic-speaking and Islamic. “Arabic and Islam have a special relationship, as Muslims believe that their sacred text, the Qur’an, are the words of God himself, spoken and received in Arabic.”

Nwankudu also says this research also could be a way “to study Western media’s perception of Islam and the role it is thought – usually incorrectly – to play in the political climates of Islamic countries.” She also wants to see how “the Arabic language, after the Arab Spring, continues to impact the revolutions’ widespread and evermore pressing consequences.”

Nwankudu, the daughter of Ada Nwankudu of Florence and Amadi Nwankudu of Atlanta, is a graduate of Wilson High School in Florence. At Wofford, she is a Dean’s List student and is a member of Campus Union and Alpha Phi Omega; president of Jambo Africa; co-president of Sigma Delta Pi, the Spanish Honor Society; and is a residence assistant.

Also recognized during the Honors Convocation was the 2016-17 Presidential International Scholar Punam Mulji, a senior from Spartanburg who is majoring in biology with a minor in accounting. Winners of Wofford’s academic department awards and others also were honored during the program, held in Leonard Auditorium in Main Building.