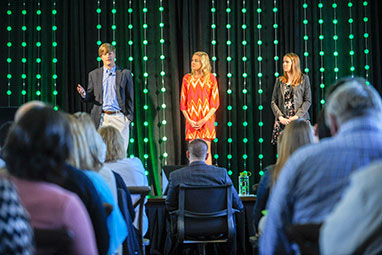 Students in Wofford's Launch and Impact programs in The Space in the Mungo Center present their projects to a panel of judges recently for the chance at part of $20,000 in cash and in-kind services.
2015-03-31

The competition is held by The Space in the Mungo Center, Wofford’s professional development program.

Six winners were selected from 10 finalists, all of whom presented 15-minute pitches for their concepts before a panel of judges. The Impact projects focused on social or community-good projects while the Launch projects centered on traditional business or entrepreneurial models.

Phillip Habib’s Learn More Do More, which helps former prison inmates earn a community college degree to increase their employment opportunities, won first-place among the Impact projects. Habib, a first-year student from Goose Creek, S.C., assists the men with college and financial aid applications as well as with basic job applications and interview skills. Habib received $5,000 plus a marketing/branding consultation from New York City-based The Strategy Collective. In the Launch category, business economics major Victoria Biggers, who is from Clover, S.C., won first-place for her Wee Celebrationsbusiness, which offers “set up to clean up” services for children’s birthday parties and corporate events. She received $5,000 and a year of co-work space from The Iron Yard in Spartanburg.

More than 400 people attended the event, which was held in the Michael S. Brown Village Center and included an exposition of 26 Impact and Launch projects also seeking support. The competition is one element of Wofford’s The Space in The Mungo Center programs. The Space includes five programs aimed at giving students preparation with career development, internships, social entrepreneurship, entrepreneurship and consulting.

In the Impact category, second place went to Farah Kindergarten, aimed at bringing a non-profit kindergarten to underprivileged children in Kabul, Afghanistan. Farahnaz A., a first-year student from Burlington, Vt., and Afghanistan native who uses an assumed name to protect her identity and the safety of her family, created the project to make a difference in the lives of children living in “one of the world’s most dangerous places to be a child.” The project won $1,000 plus a website consultation from Rye Development in Greenville, S.C.

Sea Island Seasonings took third place in the Launch category. Sea Island Seasonings is a spice blend for meats, seafood and vegetables created by sophomore psychology major Laura Roddey of Beaufort, S.C. A portion of her company’s proceeds support two South Carolina Lowcountry charities. She won $1,000 plus a citywide marketing campaign by Love Where You Live in Spartanburg.