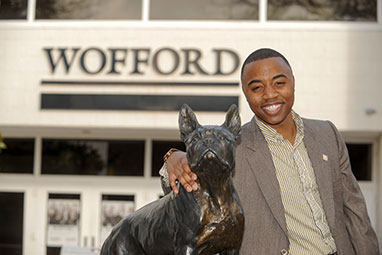 SPARTANBURG, S.C. – Donovan Hicks ’16 says he hopes he can inspire others, but he doesn’t have to just hope. He already serves up inspiration.

The Wofford College student from Spartanburg is a finalist for a prestigious Harry S. Truman Scholarship and is one of 10 people admitted as a 2015 Public Policy and International Affairs Law Fellow at the University of California Berkeley this summer.

These are major accomplishments unto themselves, but Hicks is so much more.

Hicks, who is majoring in government and finance, is a Bonner Scholar at Wofford, providing 140 service hours per semester to South Carolina Legal Services. He also is vice president of Wofford Campus Union student government organization and director of Student to Student (S2S), a local community service initiative at Boiling Springs High School that aims at positioning students so that college is an option for them. In addition, Hicks works with Reformed University Fellowship (RUF), a Christian outreach ministry on campus.

He plans to attend law school, seeking a dual degree in law and public policy, with the ultimate goal of working on issues of education policy.

Hicks, who has completed two summers of service, one in New York City mentoring inner-city children with Project Morray and another doing website and communications for South Carolina Legal Services while in India, also spends time sharing his love of Wofford with prospective students as a Wofford Ambassador. “I hope that I generally inspire others to never be afraid of failure and to follow their dreams, no matter how large they may sound.”

For the Truman Scholarship, Hicks will interview in the region of South Carolina, Georgia, Alabama and Florida; results of the winners of the scholarships will be announced April 15. The scholarship is the official federal memorial to its namesake president. The Harry S. Truman Scholarship Foundation supports the graduate education and professional development of outstanding young people committed to public service leadership. The $30,000 scholarship is highly competitive.

Hicks is quick to say he couldn’t do all that he does without the help of professors and staff at Wofford. “I want to say that there is no way I could have completed and succeeded in this (Truman) scholarship quest without the recommendations of Jennifer Dillenger (director of The Space), Dr. David Alvis (associate professor of government) and Dr. Ramon Galinanes (Bonner Scholar program director). I also thank former Dean Dan Maultsby and Dr. John Ware (associate professor of English) for their countless edits and direction. I also appreciate Provost Dennis Wiseman for believing in me and facilitating this process. This was a team effort – one that took four months, more than 10 complete drafts and a host of patience. I have them to thank.”