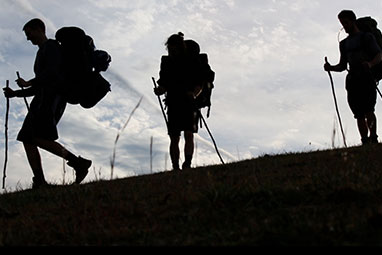 “Done for its own sake and nothing else. Not so much a choice, but a calling, and everything else fades away. This is ‘Flow.’”

“It was conceived with academic intent, but by the end it became something so much more.”

These words, narrated by Wofford sophomore Alex Bentley, frame the documentary that he, classmate Matthew Aurednik ’17 and Chris Cinatl set out to create during their hike of a 225-mile stretch of the Appalachian Trail (AT) between Catawba, Va., and Harper’s Ferry, W.Va. During January’s brutal cold, Bentley (a biology and Spanish major), Aurednik (an environmental studies major) and Cinatl (Bentley’s cousin) studied the history of the trail’s creation and experienced its current culture.

The three hikers documented their experiences on film throughout the entirety of the hike, from interviews and wildlife sightings to pranks and nosebleeds. The project’s result is a documentary called “Flow” that also shares the life lessons the trail taught them over the course of 15 physically and emotionally challenging days.

The winter weather conditions were particularly difficult to navigate, with high-speed winds and freezing temperatures that sometimes dipped below zero. In the midst of this “polar vortex,” Bentley came down with what he thought was a nasty cold, and the hikers were forced to leave the AT after a grueling day, what Bentley says was the worst day of his life. He was diagnosed with the flu, a sinus infection and bronchitis and was forced to suspend hiking for five days.

When the group returned from their trip, they shared their lessons learned. The hour-long documentary, “Flow: A Journey through History and Culture on the Appalachian Trail,” highlights these lessons.

“I learned that [the hike] wasn’t about proving anything, but experiencing, apart from what anybody else thought,” says Bentley.

Aurednik was surprised by the idea of grace, a lesson to which an entire section of the film is devoted. The group found that hiking the trail makes the hikers vulnerable and often in need of help, from rides into town for supplies to a place to stay the night. The people who help these hikers are “Trail Angels,” and the gifts they bestow are sometimes described as “Trail Magic.”

The hikers experienced grace in a special way when they serendipitously met two well known AT experts: Brian King, Appalachian Trail conservancy publisher (whose book the hikers already had read), and Kip Redick, philosophy and religion professor at Christopher Newport University. “Meeting them on our last day was just another reaffirming spontaneous act of grace,” says Aurednik.

These are just a few of the many stories and themes contained within the film, which premiered on April 20, in Main Building’s Leonard Auditorium. Jennifer Pharr Davis, the current record-holder for the fastest AT hike, spoke following the film.

“[Hiking] becomes addictive,” says Pharr Davis, who has hiked in all 50 states and has logged more than 12,000 miles on six continents. She says that something about the Appalachian Trail, however, is special.

“My favorite trail, out of all the places I’ve hiked, is the Appalachian Trail. The mountains are very wise… there’s a lot of biodiversity,” she says. This uniqueness leads Pharr Davis to give seemingly contradictory advice about how to best approach an AT hike: “You have to be really stubborn – you have to not quit on the days that are just horrible – but on the other hand, even though you are completely stubborn, you have to remain totally adaptable and totally flexible. If you’re not willing to change, you’re not going to be able to keep making it up the trail.”

Like Bentley and Aurednik, Pharr Davis found that proving her worth as a hiker was not the goal, even as she was attempting to break the record for the fastest AT hike. “I decided to find my best instead of [pursuing] the best.” With this mentality, along with significant help from her teammate and husband, Brew Davis, Pharr Davis was able to beat the record with a 46 day, 11 hour and 20 minute hike from Mt. Springer, Ga., to Mt. Katahdin, Maine.

While the statistics are most often emphasized, Pharr Davis finds that the numbers don’t matter to her. “My favorite part of being the record holder is to stand up here and say that my hike is no greater than Matt’s and Alex’s hike… hiking is not about the numbers. It’s about relationships.”

“We’re looking to unearth the deep history that lies in America’s most trodden footpath and explore the culture that has grown from it,” narrates Bentley in the beginning of the documentary. “It only makes sense that a long trail should have a long story.” In one hour and six minutes, Bentley and Aurednik have told theirs.