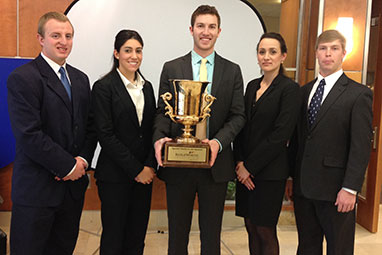 SPARTANBURG, S.C. – Wofford College has had some great successes for our students and alumni recently, with teams advancing in competitions and individuals achieving top honors and scholarships.

In the final round, Wofford defeated MBA teams from Clemson University, Emory University and the University of Georgia. All teams analyzed the publicly traded chemical company Axiall Corp.

The Wofford team now will compete in the national competition in April against the winners of the other regional competitions. Members of the Wofford team are Victoria DaSilva ’15 of East Greenwich, R.I.; Katherine Donzella ’15 of Greenville, S.C.; John Estes ’15 of Carlisle, Pa.; Al Kelly ’16 of Akron, N.Y.; and Whit McLeod ’15 of Summerville, S.C. Their adviser is Dr. Michael Merriman, assistant professor of accounting and finance. WoCoders finish second in Mercer Spring Programming Competition

Wofford’s programming team, the WoCoders, finished second in its division in the Mercer Spring Programming Competition held at Mercer University in Atlanta. The team finished the five-hour competition behind the Mercer Binary Bears A team. The WoCoders and Binary Bears A teams each completed six of 15 problems successfully. Only 13 penalty points separated the two teams.

The WoCoders finished ninth among all of the 27 teams that competed in four divisions. Team members are Mayfield Reynolds ’15 of Spartanburg; Billy Fahey ’16 of Mountain Brook, Ala.; and Daniel Couch ’17 of Columbia, S.C. Their adviser is Dr. David Sykes, professor and chair of the Department of Computer Science.

Students in Wofford’s Chinese Language and Culture Program brought home six awards from this weekend’s Sixth Palmetto Chinese Star Competition. Travis Trojan ’15 of Drayton, S.C., was the Palmetto Chinese Star Winner and will represent South Carolina in the regional competition this April. Trojan dominated both Language Proficiency and Cultural Proficiency in the Advanced Level and won first place in both.

The Palmetto Chinese Star is a statewide competition that allows Chinese language learners to demonstrate their language and cultural proficiency. The competition is in its sixth year, and Wofford College has earned four of six opportunities to represent South Carolina in the regional competition. Additionally, Wofford has taken home two Future Palmetto Star Awards. The team’s adviser is Dr. Yongfang Zhang, assistant professor in Chinese.

Donovan Hicks ’16 of Spartanburg has moved on to the finalist round of interviews for a Harry S. Truman Scholarship. He will be interviewed on March 30 by a panel of previous Truman Scholarship winners. Winners will be announced April 15. Hicks, a government and finance major, also recently was one of 10 people admitted as a 2015 Public Policy and International Affairs Law Fellow at the University of California Berkeley this summer.

Hicks is a Bonner Scholar at Wofford, providing 140 service hours per semester to South Carolina Legal Services. He also is vice president of Wofford Campus Union student government organization and director of Student to Student (S2S), a local community service initiative at Boiling Springs High School that aims at positioning students so that college is an option for them. He also does service work at Reformed University Fellowship (RUF), a Christian outreach ministry on campus.

Hicks plans to attend law school, seeking a dual degree in law and public policy, in hopes of working on issues of education policy.

Based on Wofford’s Quiz Bowl team’s performance recently at the National Academic Quiz Tournaments (NAQT) Southeastern Sectionals in which it finished second behind the University of Georgia, the team has been invited to take part in the NAQT Intercollegiate Championship Tournament in Division II (for teams with no players with significant experience). The tournament will be held March 28 in Atlanta. (Results of the Southeastern Sectionals can be found here: https://www.naqt.com/stats/tournament-teams.jsp?tournament_id=6225.)

Three Wofford students, Alexandria Arsi ’17 of Lexington, S.C.; Richard Fields ’17 of Lexington, S.C.; and Cole McCarty ’17 of Lexington, Ky., recently completed training to join the University Innovation Fellows of the National Center for Engineering Pathways to Innovation (Epicenter), a national program that empowers student leaders to increase campus engagement with entrepreneurship, innovation, creativity, design thinking and venture creation. The center announced 123 new fellows, bringing the total number of fellows to 291 from 114 colleges and universities. The program is run by Epicenter, which is funded by the National Science Foundation and directed by Stanford University and VentureWell. The Wofford students were supported by faculty sponsors Courtney Shelton and Jeremy Boeh, both on the staff of The Space in the Mungo Center. University Innovation Fellows (UIF) is a program managed by Stanford University composed of a network of college and university students across the United States that is trying to transform the innovation and entrepreneurship landscape on campuses throughout the nation. McCarty is working on developing a Makerspace at Wofford. Arsi is coordinating efforts to enhance the job and internships search and alumni networks. Fields plans to organize a TEDxWofford event regarding entrepreneurship for the fall of this year.

Wofford graduate Joseph McAbee ’12 of Winston-Salem, N.C., was among 40 of the most academically brilliant and socially committed young people in the U.S. who will take up a Gates Cambridge Scholarship to study at the University of Cambridge in England, it was announced recently. The 40 Scholars represent 38 institutions, seven of which have never had a Gates Cambridge Scholar before. The scholars will study a range of subjects from transgender identity and unemployment in the Middle East to brain tumor biology (glioblastoma) and antibiotic resistance.

McAbee received a bachelor’s degree in biology with a concentration in neuroscience from Wofford. While here, he developed a passion for studying the brain and diseases that plague it. This passion grew during his three years as a medical student at Wake Forest School of Medicine. He participated in the Pediatric Oncology Education program at St. Jude Children’s Research Hospital, which led to a strong interest in neuro-oncology research. As a Gates Cambridge Scholar, he will do a Ph.D. in clinical neuroscience, focusing on the genomics of glioblastoma and characteristics of the tumor microenvironment. His aim is to develop better treatment strategies for this most malignant form of brain cancer.