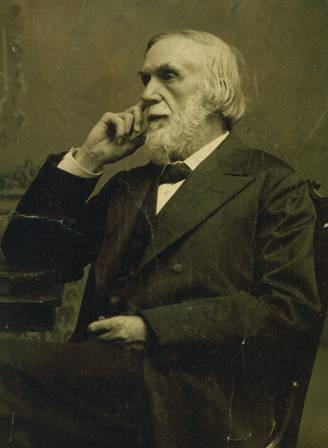 James Henry Carlisle, Wofford's most influential faculty member of the 19th century, was born in Winnsboro, South Carolina on May 4, 1825. He was the second son of Dr. William Carlisle and Mary Anne Buchanan Carlisle, though his older brother died in infancy. His parents, who were first cousins, were both born in Ireland. His father's family, including both of his Carlisle grandparents, migrated from County Antrim in 1818. All of these members of the family are buried in the Methodist churchyard in Winnsboro.

James H. Carlisle grew up and was educated in Winnsboro before riding off on horseback to South Carolina College in 1842. There, he joined the sophomore class and graduated in December 1844, the second honor graduate of his class. He taught in the Odd Fellows Academy in Columbia, and the Columbia Male Academy, for a number of years, and in 1848, married Mary Jane Bryce.

He was attending a meeting of the South Carolina Annual Conference in Newberry in the fall of 1853 when someone told him in passing that Wofford College had been organized and he had been elected professor of mathematics. This surprised him, he claimed, for he had not sought the position. He later told friends that had he been consulted, he would have preferred the chair of mental and moral philosophy.

He arrived in Spartanburg the next August, at age 29, and took up residence in the campus home where he lived for the next 50 years. Six years after coming to Spartanburg, he was elected to represent the county in the secession convention. He served a short time in the state house of representatives during the war.

Following the Civil War, some on campus feared that he would be imprisoned by federal soldiers for his role in signing the Ordinance of Secession. (Carlisle's original lithograph copy of the ordinance is in the College archives collection.) The years of war and reconstruction were hard on the college, and faculty members had to undertake unusual chores. At first, Carlisle had to cut firewood for the faculty, but as D. D. Wallace noted, the tall, gangly scholar soon asked that someone be assigned that task. In the late 1860s, Carlisle gave lectures on astronomy to people in Spartanburg and charged a small admission fee. He used the proceeds to purchase a telescope.

Elected president in 1875, he declined to move into the president's home on campus. He explained that he thought the home the college had already provided for him was enough of a palace.

Carlisle made the education of his students, and particularly their moral education, his top priority. Though he was officially professor of mathematics and astronomy, he really preferred to teach morals and religion. He focused the faculty's personal attention on each student, but this could only be done with a relatively small student body. Each student at some point in his time at Wofford was invited to spend the evening at Dr. Carlisle's home.

The college gradually moved out of a period of financial peril, though by no means did it become a prosperous institution. Three successive financial agents, all of whom were Methodist ministers and all of whom became Methodist bishops, worked among the college's friends to replace the ruined endowment. Student life in the Carlisle era revolved around the literary societies. In the 1870s, the trustees decided that each student had to join a literary society to remain in college. The literary magazine, The Journal, was established in 1889, beginning a tradition of student publications at the college. The literary societies took an active role in managing all the student publications.

Fraternities grew more active, and in addition to the three that arrived on campus during the Shipp presidency, Sigma Alpha Epsilon, Kappa Sigma, and Pi Kappa Alpha joined the campus before 1900. While students began playing baseball in the 1870s, intercollegiate athletics did not begin in earnest until around 1886. Baseball and football proved popular among the students in the 1890s, though many church leaders complained that football was violent and a waste of time.

Carlisle submitted his resignation as president to the trustees in 1901, but it was a year later before they finally accepted it and named his successor. He remained a part of the campus for seven more years, speaking in chapel and visiting with alumni who dropped by his home. When he died on October 21, 1909, his funeral was attended by some 5,000 people, including students, alumni, ministers, townspeople.