Champions in competition, the classroom and community

Courtesy of her psychology major, she also understands the science behind the runner’s high she feels once she hits her stride.

"Getting up and out the door is the hardest part. Running is so rewarding. When you’re finished you know both physically and mentally you’ve accomplished something," says the Orono, Maine, native whose family now lives in Aiken, S.C.

Steelman ran her first mile fun run as a 5-year-old.

"We were that family that woke up and did 5Ks," says Steelman, who also followed in her brother Matt’s footsteps and played basketball before switching exclusively to cross country and track. Matt Steelman ’12 was on the 2010 and 2011 Southern Conference Championship teams that first went to the NCAA Tournament; he’s now a minister.

Steelman’s immediate goal is to train, recover, be consistent, eat right and let the results continue to speak for themselves. Eventually, she plans a career in health and nutrition.

Bijonae Jones ’19 was the first undergraduate to receive the prestigious Diversity Award from the American Volleyball Coaches Association (AVCA). The Spanish major with a studio art minor from Blythewood, S.C., was an outside hitter on the Wofford volleyball team who recorded 172 kills, 23 service aces, 254 digs and 20 blocks during her senior season. She served as a captain three of her four years on the team.

"Serving as captain helped me mature," she says, "and it led me into the field of coaching. I want to impact students and be the figure that people have been for me."

The Diversity award paid Jones’ expenses to the AVCA conference.

Jones has accepted a graduate assistantship to coach volleyball at LaGrange College while pursuing a Master of Arts in Teaching.

Andrew Orzel ’20 believes every day offers an opportunity to improve his skills so he can help his team win. The finance major from Newark, Del., plays first base.

For the past two summers, Orzel, like many on the team, played in summer baseball leagues. The leagues provide an opportunity for improvement and immersion — living with a host family and playing a schedule of about 50 games between early June and mid-August. This past summer in Waynesboro, Va., Orzel also spent time each week at Camp Light working with children with special needs.

"The Camp Light kids get really excited to see us," says Orzel. "They love baseball and look up to us. Spending time with them gives you a different perspective."

It’s a long way from Essex, England, to Spartanburg, S.C., but Becca Earl ’22 has found success across the pond.

Earl was named Southern Conference Freshman of the Year after posting the lowest scoring average in program history, six top-10 finishes and a win in the 2018 Terrier Intercollegiate. She FaceTimes her swing coach in England and has Wofford coach Angie Ridgeway to assist with course management and the mental stresses of the game.

She has adjusted to the food and is happy that Wofford has one of her favorite American chains on campus.

"I discovered that I really love and even crave Chick-fil-A," she says.

Earl has made friends beyond the women’s golf team and has learned how to balance matches, practice, workouts and academic commitments.

"I’m not homesick at all. I haven’t had time," says Earl. "I’ve been so busy and made a good group of friends. I’ll miss Wofford over the summer."

Earl has enjoyed taking a variety of classes and discovering new interests.

"Back home in England, students have to decide what they want to study before they ever enroll in college," says Earl. "It’s nice to try different things."

Sandra López ’21 and her efforts to build a stronger, healthier community have drawn the attention of Campus Compact. The national organization named López a Newman Civic Fellow this spring for her public leadership and community involvement.

"I am a strong believer that the engagement of college students in their communities builds better leaders and successful adults," says the finance major from Enoree, S.C.

López, who throws disc, shot and weight for the Wofford track team, is a Bonner Scholar and first-generation college student. She mentors high school students through the iCAN program of the Citizen Scholars Institute of The Spartanburg County Foundation, tutors second graders in the Arcadia community and works with Access Health, a program that connects low-income, uninsured individuals to health care and other services for assistance.

She’s also a member of a research team led by Dr. Laura Barbas Rhoden, professor of Spanish, and Dr. Christine Dinkins, William R. Kenan Jr. Professor of Philosophy, to promote community-building, health and inclusion in the Spartanburg area, in particular with the area’s growing Latinx population.

An injury had Chloe Wanink ’20 on the bench most of her sophomore season, but redshirting has its benefits. She picked up a major in sociology and anthropology to add to her psychology major, and she came back better than ever.

This season Wanink, a guard on the women’s basketball team from Cameron, Wis., became the 14th Terrier to reach 1,000 career points, moving up to number eight on the list by the end of the season. She broke the single-game scoring record set by Jenny Net ’02 with 40 points against Western Carolina, and she broke college records for most field goals in a game (17) and most consecutive double-digit scoring games (14).

The All-Southern Conference First Team selection, however, is quick to divert attention from herself to her coaches and teammates.

"Coach Garrity came in my first year with high expectations, and we’ve begun to realize that it’s not just about staying in the game with bigger schools, we can beat them," she says. "As our confidence has grown, so has our success."

Conrad Heinrich ’19 wanted competitive Division I athletics, but he also wanted a balance between strong academics and a good social life. The finance major with minors in accounting, economics and philosophy from Sugar Land, Texas, found it in Wofford, and the combination landed him in the finance leadership development program at Thermo Fisher Scientific. Starting right after graduation, he will be rotating through on-the-job training in Boston, Pittsburgh and San Diego.

"It was challenging at times," says Heinrich, referring to weekend track and field competitions and a fragmented practice schedule because classes and labs came first. "Coach Bomar always stressed academics. An environment like that fostered good habits and a will to succeed in the classroom."

Heinrich’s sister, Angela Heinrich ’16, also majored in finance at Wofford, but Heinrich discovered his own Wofford way, and his teammates were a huge part of it.

"We ate meals together, socialized and studied together," he says. "Some of the best moments of my college career have been with my teammates."

When Cassidy Hicks ’19, left, was born, her dad put a toy racquet in her hands. Jenna Vroman ’21 started playing at age 7. The two met as members of the Wofford women’s tennis team, and this spring, their partnership led to a No. 52 posting in the Intercollegiate Tennis Association’s Top 90 National Doubles ranking. The ranking is the first in Wofford history for any doubles pair.

"She’s good at putting balls away at the net, and I’m able to get her those balls from the baseline," says Vroman, a biology and Spanish major from Charleston, S.C. "I’ll set her up all day long."

"We also got better at mentally resetting when we struggled," says Hicks. Hicks, an accounting and mathematics major from Hamilton, Ohio, begins a master’s degree in accounting at Miami University in Ohio this fall. Her success on and off the court earned her a Southern Conference Presidential Scholarship to help with graduate school expenses.

After the season, Hicks and Vroman received First Team All-SoCon recognition in doubles and singles play.

Elisabeth Ralph ’22 scored back-to-back goals, including a hat trick, in the college’s first women’s lacrosse home victory. The first-year student from Hillsdale, N.J., also had a turn as SoCon Defensive Player of the Week during the season. She plays lacrosse because she likes the pace and creativity of the game, and she came to Wofford because she liked the idea of helping build a program.

"I also like the strong academics and community feel of Wofford. The community — both on and off the field — is actually my favorite thing," she says.

Ralph says she and her teammates have been looking forward to getting a new coach and to becoming more and more competitive.

"We’re a young team, and there’s no substitute for experience, but we’re gaining that, and once we do … " Ralph grins and lets the statement hang.

Robbierre "Robbie" Armstrong ’20 represented Wofford and the Student-Athlete Advisory Council at the NCAA’s diversity forum in Atlanta in the fall.

The business economics major from Lawrenceville, Ga., says the experience opened his eyes to a variety of issues, including the importance of mental health.

"Coming from the meeting, there are things I want to bring back here, especially for student-athletes and football," says Armstrong. "For instance, mental health is a big deal. We’ve been taught for so long to suck it up. What you’ve got going on off the field doesn’t matter. It’s important to have mental health checks."

After the conference, Armstrong now thinks differently about diversity and inclusion and why they’re important to community.

"You take care of a place and treat it differently if you feel like you’re a part of it," he says.

Armstrong, who started at the Naval Academy and transferred to Wofford, is an active part of the Wofford community. He’s a member of Kappa Sigma fraternity, gives admission tours, has worked on campus and is a defensive lineman for the Terriers. This summer he will be interning with Northwest Mutual in the area of wealth management and working out with the football team. 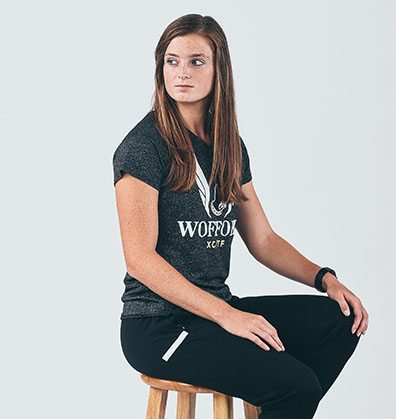 McLeod Dean ’19 has watched the Wofford women’s track team move from seventh in the Southern Conference her first year to a second-place finish at the Southern Conference Championships this spring. Teammates Amber Lust ’19 won the 100-meter hurdles and the heptathlon, and Hannah Steelman ’21 took the 3,000-meter steeplechase. Dean added wins in the 100 meters and the 200 meters and qualified for the NCAA East Regionals.

"Last year we realized that we had a lot of potential," says Dean. "The coaches, my teammates, we push each other so much at practice and keep each other accountable on and off the track."

For Dean specifically, focusing on technique and form — staying down out of the blocks — has made a huge difference.

"Coach Bomar tells me before every race, ‘Drive. Just drive,’" says Dean, who will be working with Edelweiss Lodge and Resort in Germany for 15 months after graduation. "That’s something I’ve always struggled with, and he really helped me improve this year."

Only eight teams have recorded undefeated Southern Conference men’s basketball seasons since 1946. Wofford did it during the 2018-19 season.

Only four colleges or universities since 1970 have won the Southern Conference football and men’s basketball championships in the same year. Wofford has two of the four: the 2009-10 teams and the 2018-19 teams.