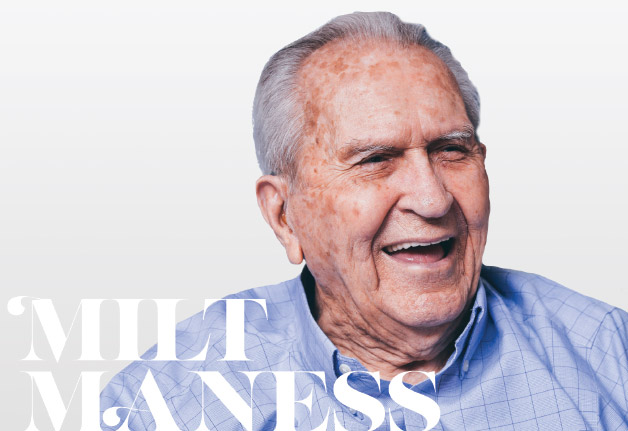 Later scouting for the Boston Red Sox; selling the first football helmets with facemasks; living, working and raising a family in Spartanburg … when you’re 100 you’ve got a lifetime of stories to tell.

Milt Maness ’41 celebrated his 100th birthday on Aug. 23, 2018. He still lives independently in his Duncan Park home, pays his own bills and keeps his mind sharp playing Words with Friends, reading the Spartanburg Herald-Journal and decoding the daily cryptoquote.

“When they offered me a scholarship to play football at Wofford, I took a little time to get in shape. I weighed 220 pounds but got down to 200. I played at around 198,” he says, the details as clear as they were 80 years ago. “I played football, basketball and baseball, lettering all four years, and I lettered one year in track, but I’m not sure I should count that.”

According to Maness, fielding athletics teams during the 1930s wasn’t easy. He played both offense and defense on the gridiron, usually at wingback, fullback or blocking back. On the court he was a forward or a guard, depending on who the Terriers were playing. He was a catcher until he hurt his arm, then an outfielder, and once was called off the diamond to go throw the shotput in his baseball uniform. He also ran the 220- and 100-yard dash.

Although a standout athlete, Maness says one of his proudest accomplishments was making the dean’s list his junior and senior years.

“English professor Kenneth Coates was an absolutely great man,” says Maness. “He was my favorite.”

Maness' tuition and living expenses were covered thanks to the scholarship — one of the few athletics scholarships at the time — but his pockets were still empty.

“I heard I could join ROTC and get some spending money,” he says. “My roommate and I joined up. We had to sign a paper saying we would enlist in the Army and give them four years. They didn’t wait. I got my orders to go to Fort Benning before I got my diploma.”

Maness explains that Wofford “had a deal with the government to let students learn to fly for free. It didn’t cost anything.” He soloed while at Wofford (in the days of open cockpits), which made him an obvious choice for assignment as a pilot in the Army Air Corps, which later became the U.S. Air Force.

Maness served in World War II from the pilot’s seat of a B-29 Superfortress bomber, the U.S.’s largest plane at the time. It had the first pressurized cabin and from wing tip to wing tip was 141 feet long, the equivalent of a 14-story building.

“It took a lot of muscle to fly,” says Maness.

One of Maness’s last flights — even called the Last Flight — sounds like something from a movie.

“After the first atomic bomb, they thought Japan would give up, but they didn’t,” recalls Maness. “They decided to put all the bombs and gas that they could hold in the bombers. I had never flown with that much weight. We had to fly to the very tip of Japan. The flight took between 17 and 18 hours to go up there and back.”

Maness says by that time in the war, Japan only had three oil refineries left, and they were protected heavily with flack guns and kamikaze pilots.

“They loaded us down, but none of them knew — not the engineers, the colonels, the generals — what would happen because this was the largest load the bombers had ever carried,” says Maness, who was third in line on the runway.

Maness remembers the takeoff and the calculations they were given that would get them safely out of the jungle, over the cliff and on their way. The first plane clipped the trees and plunged over the cliff into the ocean with the bombs igniting upon impact. No one survived. The second plane had engine trouble and stalled out on the runway.

“I pulled in line and said ‘no way … I gotta make some changes.’ They said 4 degrees of flaps, but I increased that to 8. For manifold pressure they said 20 degrees. I went up to 35. The wings were flopping. The plane was shaking.

They kept giving me the green light, GO, GO, GO. I let loose of the brakes, and the force pinned me against the seat. I held it down as long as I could," says Maness. "When I saw what worked, I called the tower and told them. We didn’t lose another plane.”

Maness promises to tell more stories about Wofford, World War II, working for the Red Sox and the merits of clean living when Wofford Today interviews him for his 200th birthday. We’re not sure we can wait that long, but we have no doubt that he can.