This could be me

Paul Atkins returns to campus to share experiences as commissioner of the SEC. 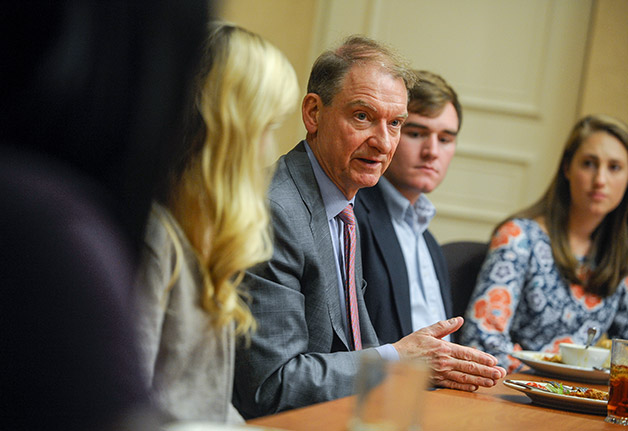 When Paul S. Atkins ’80, CEO of Patomak Global Partners, former Securities and Exchange commissioner and a member of the Congressional Oversight Panel for the Troubled Asset Relief Program, came to campus in October, Kiara Williams ’18 was sitting in the audience in Leonard Auditorium thinking, “This could be me one day.”
Atkins was on campus to talk about international business, the current regulatory climate and the SEC, but he also returned to inspire and advise as a successful graduate of Wofford College.

“Paul Atkins is a reminder to those of us who teach here that our students may one day make decisions that have a great impact on the lives of others,” says Dr. David Alvis, associate professor of government and one of the college’s pre-law advisers.

Atkins has done just that. During his six-year tenure on the SEC (2002-2008), Atkins advocated for better transparency and consistency in the SEC’s decision-making and enforcement activities and smarter regulation that considers costs and benefits. Before joining the SEC, Atkins, who went to Vanderbilt Law School and worked as an attorney in New York immediately after graduation, assisted financial services firms in improving their compliance with SEC regulations and worked with law enforcement agencies to investigate and rectify situations where investors had been harmed. The largest of those involved the Bernie Madoff Ponzi scheme. Atkins was appointed emergency president of the Bennett Holding Group’s only legitimate subsidiary and eventually helped the company’s clients recover most of their investments.

“The experience made me sensitive to investor protection issues and the importance of the SEC’s enforcement powers,” says Atkins, who required everyone on his recovery team to field calls from swindled investors. “Two hundred thousand people lost money during the Madoff scandal. Their stories motivated us to do our job.”
Since then, Atkins has spoken across the country and written articles in The Wall Street Journal, Harvard Law Review, Financial Times, Forbes and USA Today about going after Ponzi schemes. He shared some of those stories with Wofford students and gave them an SEC primer, discussed his views on the causes for the failure of the banks in 2008 and weighed in on the flaws in the Dodd-Frank Wall Street Reform and Consumer Protection Act. He also answered questions from Wofford students.

“What will keep us from another recession and taxpayer bailout?” “Is the SEC constitutional?” “Is high-frequency trading good practice? Why or why not?” “Do you have suggestions for internships in the financial services field?”

“Is it better for me to go straight to graduate school or get experience in business first?”

“They were a sharp group,” says Atkins. “Wofford has good leadership and an active, engaged student body. It’s been fun to watch the college’s progress from Washington.”

After Atkins addressed the crowd in Leonard Auditorium, he ate lunch with and answered additional questions from Wofford students studying accounting, economics, finance, government and history.

“I’m taking an accounting class this semester and just did a presentation on the SEC, so this is relevant both to what I’m studying and to my future,” says Williams, a government major with a business economics minor from Blythewood, S.C. “I’m really interested in how business and government agencies intertwine. Listening to Mr. Atkins and talking with him gave me the opportunity to learn more about a field I’m considering after graduation.”
Ashley Duckworth ’17, a government and history major from Greeneville, Tenn., is applying to law school. She accepted an invitation to the luncheon because she understands the value of face time with those well established in the business world.

“Opportunities like this allow Wofford students to network with people we normally would not have access to,” she says. “Mr. Atkins showed me another way to use a law degree, and that’s exciting.”