The power of the gift 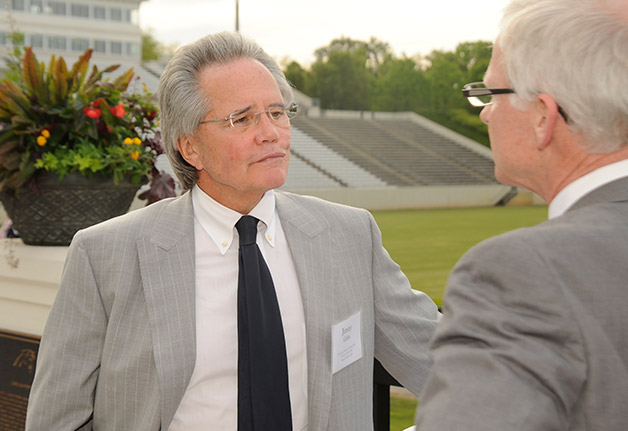 Initiated by trustee Jimmy I. Gibbs and his wife, Marsha, the Trustee Matching Fund encourages the establishment of endowed scholarships by providing a pool of dollars designated to match the scholarship gifts of alumni, parents and friends of Wofford College.

In 1983 Jimmy and Marsha Gibbs established a scholarship at Wofford College in memory of Jimmy’s father, Melvin I. “Razor” Gibbs ’43. The establishment of the scholarship was the start of what has become a long legacy of generosity to Wofford College: Gibbs Stadium, an additional endowed scholarship, the Marsha Gibbs Tri Delta House in the Stewart H. Johnson Greek Village, capital campaign and special projects gifts, enthusiastic support during the Terrier Ball Auction and Gala and service on the Wofford Board of Trustees. And that list is by no means complete.

“I’ve always been a believer of ‘the more you give, the more you get,’” says Jimmy Gibbs. It’s that mindset that motivated him to establish the Trustee Matching Fund at Wofford College, a multimillion-dollar commitment intended to create a wave of endowed scholarship support for Wofford students.

“This is one of the most selfless gifts ever made to Wofford,” says Calhoun Kennedy ’89, associate vice president and executive director for advancement. “Scholarships will always be our top priority because students are our top priority. Many outstanding students who want to attend Wofford have difficulty doing so because of financial constraints. Students who look at Wofford have options, and these scholarships can make the difference between a student coming to Wofford or choosing another institution.”

According to Kennedy, the impact of endowed scholarships is two-fold. Scholarships help the college stay competitive and attract top students, and they also decrease the burden of financial aid on the operating budget. That means the college can allocate those operating dollars to academic and cocurricular programming that enhance the Wofford experience for all students.

“This gift could not be more appropriately focused, given our needs,” adds Dr. David Wood, senior vice president for advancement. “Marsha and Jimmy Gibbs have provided generous support to virtually every charitable organization in the region, namely the award-winning Gibbs Cancer Center, a part of Spartanburg Regional Healthcare System. We are so fortunate that they are also faithful friends of Wofford College.”

Normally, the college requires a minimum of $50,000 for the establishment of a permanently endowed scholarship. Matching opportunities are available through the Trustee Matching Fund, however, at three levels, beginning at a commitment of $25,000 (see box for matching criteria).

Matching funds are limited, and requests for these funds will be accepted on an ongoing basis until all funds are committed. The college will credit all matching dollars triggered by the Trustee Matching Fund to the endowed scholarship donor.

“The money is theirs to start making a difference,” says Gibbs, who established the fund as an incentive to engage new scholarship donors and magnify the impact of their gifts.

Endowed scholarships leave a legacy, says Wood. They provide perpetual scholarship support because they are funded through the dividends generated from a principal balance. They are also a lasting way to honor a family member, friend or favorite professor.

“It represents a legacy, and it also creates a legacy by providing deserving students with access to the liberal arts experience in preparation for meaningful lives as citizens, leaders and scholars,” says Wood.

The daughter of two lifelong educators, Erin Mitchell Watson ’91 grew up on the campus of MacMurray College, a small liberal arts college in Illinois. She remembers fondly the time spent in the laboratory of her late father, a member of the chemistry faculty, who later served as academic dean and then president of the college. Watson found her way to Wofford thanks to the endorsement of a family friend, Dr. B.G. Stephens ’57, who served as president of MacMurray during her father’s tenure as dean.

Now Watson, managing director and head of strategy for SunTrust Robinson Humphrey in Atlanta and a member of the Wofford Alumni Association Board, sees the Trustee Matching Fund as an opportunity to recognize her father’s legacy, while supporting the college she loves.

Preference for the Edward J. Mitchell Jr. Endowed Scholarship Fund, established by Watson and her husband, Tom, will go to a woman interested in going into a business field with a background of campus and community involvement.

“This is less about me and what I’m able to contribute and more about recognizing my father and his impact and accomplishments,” says Watson. Watson always will carry with her memories of her father’s support of her Wofford studies in the social sciences, as well as his willingness to bring her into conversations about business. He helped her believe that she could do anything, in any field.

Watson says that scholarship support played a huge role in her ability to attend Wofford with minimal financial burden, and she always has been interested in giving back through a scholarship of her own.

Clint North ’79 says he uses the well-rounded education he received at Wofford every day. While that provides a good enough reason to give, parenting three sons — Ivey, Wiley ’16 and Carl ’20 — adds to the motivation.

North and his wife, Amy, saw the Trustee Matching Fund as a way to help meet a need on Wofford’s campus and to make a positive impact in the lives of deserving young people. The North Family Endowed Fund was created to support the scholarship needs of students with learning differences, while also providing programmatic support for the college’s Wellness Center.

“I have wanted to create a scholarship for some time, but was unsure of how to go about it and what I wanted to support,” says North. “After seeing a need for improvement in a particular area, then hearing about the matching fund that would add ‘bang for our buck,’ my wife and I decided that the time was right to start a scholarship for an underserved part of the college population.”

Beth Wallace ’82, associate dean of students and director of the Wellness Center, is ecstatic about this commitment from the North family.

“To celebrate, support and reward those students who have learning differences will mean so much. To be able to say, in the form of a scholarship, ‘We are so excited you’re here, and we’re investing in you because we want you to be successful,’ speaks volumes to those students who have worked so diligently to become Wofford Terriers,” she says. “The Norths are good people who saw a need.”

For more information about how to establish an endowed scholarship and take advantage of the Trustee Matching Fund, visit wofford.edu/trusteematchingfund or contact Calhoun Kennedy ’89 at kennedycl@wofford.edu or 864-597-4200.

How the Trustee Matching Fund Enhances your gifts:

There are three funding levels provided under the Trustee Matching Fund: