Celebrating Community: what a difference a year makes

My take on the naming, dedication and use of the Stewart H. Johnson Greek Village. 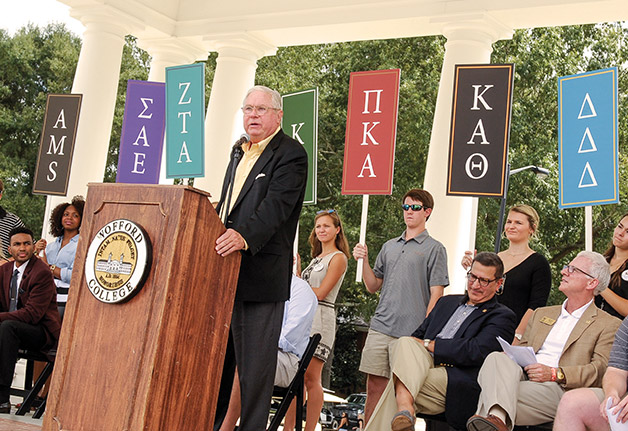 We've given tours of our fraternity house every home football weekend since the dedication and naming of the new Stewart H. Johnson Greek Village, and I hear the same things. “Wow! Wofford sure has changed since I was a student.”

Yes, Wofford has changed over the decades, but in one short year, the social look and feel of the campus are totally different.

Last year as a freshman I was trying to fit in, and I quickly discovered that Saturday afternoons took some real planning. Would I be lucky enough to get an invitation to watch a game over in the senior village? Were my friends going to be on campus or had they made plans? By Saturday afternoon, I was tired of studying and wanted to hang out with people and have some fun, but where?

That’s no longer a question with the completion of the Stewart H. Johnson Greek Village.

“I like having the new Greek Village because it creates a space for everyone to get together — Friday nights, Saturday afternoons, philanthropy events, chapter meetings, you name it,” says Lillian Fant ’17, president of the Panhellenic Council. “This year has already felt like we have been having more communal activities, which is really exciting.”

During the naming and dedication of the Stewart H. Johnson Greek Village, the Wofford family discovered the area’s potential. The student body, alumni, parents, faculty and staff — all dressed in Wofford’s colors and crowding the village's common spaces — stood together with one purpose: to celebrate community. According to Jason Davidson, director of dining services, Aramark served more than 1,000 people on-site during a tailgate-style luncheon just before the naming and dedication. The area was packed, which speaks to the importance of Greek life at Wofford.

“While many colleges and universities are choosing to direct their energies away from the Greek system, Wofford College has recommitted itself to Greek life on campus. Look around you. This beautiful village is proof,” said President Nayef Samhat during the dedication and naming ceremony. “This past year has shown us just how important Greek life and community are to Wofford College.”

Representatives from each house in the Greek Village, holding signs with their letters, provided the backdrop for the speakers. Student representatives from National Panhellenic Conference, Interfraternity Council and the Association of Multicultural Students and National Pan-Hellenic Council organizations also spoke at the event.

“I’ve already said that we need a sign at our door asking people to take their shoes off before they come in,” joked Shelton Blue ’17, president of IFC. “This is a great moment for Wofford College, and it makes the tough conversations we’ve had for the past few years worth it.”

Fant thanked the college and Greek Village donors for giving Wofford women houses “that we didn’t know we wanted until we got them.” Fant, a legacy, has been coming to Wofford and hanging out with her parents at the old fraternity row since she was a child.

Alex Hardy ’17 is new to Greek life and the fraternity scene, but he says he’s been impressed with the way different fraternities and sororities have worked together for a common goal. “This sets Greek life at Wofford College apart, and I’m proud that Kappa Alpha Psi Fraternity Inc. and the Association of Multicultural Students have been a part of this positive change at Wofford College.”

The bitterness of the lease negotiations was mentioned in passing during the dedication, a remnant of what now feels like a distant conflict. The difference on campus is now staggering. Throughout the week organizations hold events at the Stewart H. Johnson Greek Village — concerts, philanthropy events, pumpkin carving, tailgate shows, even exercise classes — that build community. The student body congregates at the Greek Village on weekend nights, flowing between the various houses regardless of affiliation. Students come to the Greek Village to study during the day or play Frisbee. It’s great, and Saturday afternoons are now simple. Students congregate at the new Stewart H. Johnson Greek Village to watch football, enjoy good music and play games on the lawn.

Drake McCormick ’18 put it really well at the dedication and naming of the Greek Village when he thanked Ann and Stewart Johnson ’67 and other Greek Village donors: “In recognition of your unselfish gifts, made in keeping with the best of Wofford College and the Greek system ... may the Stewart H. Johnson Greek Village be a place for all students ... to find welcome and a backdrop for the formation of lifelong friendships.”