Experts to offer perspectives on memorials’ impact on communities 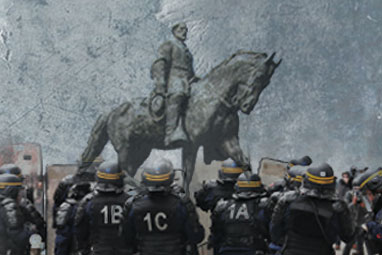 SPARTANBURG, S.C. – As communities across the country continue to grapple with questions regarding Confederate memorials, Wofford College will present a panel discussion, “Confederate Memorials: Considering Ways Forward,” at 7 p.m. Wednesday, April 18, on Leonard Auditorium. The event is free and open to the public.

Debates surrounding Confederate symbols are increasingly tense following the June 2015 shooting at Emanuel AME Church in Charleston, S.C., and the August 2017 “Unite the Right” rally in Charlottesville, Va., which culminated in the death of one counter-protestor and the wounding of several others. Statues of Robert E. Lee, streets named for Thomas “Stonewall” Jackson and Confederate battle flags flying in public spaces mean different things to different people. Some see in them the honorable defense of state sovereignty; for others, they are painful symbols of enslavement, white supremacy and segregation.

The panelists will share their experiences living with and researching Confederate memorials. They will offer diverse perspectives about the memorials’ impact on present-day communities and about the benefits and drawbacks of removing, displaying or re-contextualizing them.

Reid formerly directed educational programs at the Moton National Historic Landmark and Museum in his hometown of Farmville, Va. The former Moton High School is known today as “the student birthplace of America’s Civil Rights Movement.” Reid also has worked with the U.S. Department of Education’s Office of Innovation and Improvement and the George Mason University Center for Social Entrepreneurship. He holds degrees in American studies and Africana studies from the College of William and Mary in Williamsburg, where he chartered the Omega Psi Phi Fraternity and served as NAACP president.

Maurantonio earned a joint Ph.D. in communications and history at the University of Pennsylvania. Her research explores narrative and material traces of memory. A residential Virginia Humanities fellow for the 2017-18 academic year housed at the Library of Virginia in Richmond, she is completing a book project that considers how the Confederacy is remembered in 21st-century America.

Bell earned her Ph.D. in anthropology at the University of Virginia. While on sabbatical this year, she is a residential fellow at Virginia Humanities in Charlottesville, working to complete her book on Virginia cemeteries. Her research focuses on historical archaeology, material culture, social identity and uses of the past in the present.