Wofford again among Princeton Review’s ‘Colleges That Pay You Back’

2017 edition of nation’s best for outstanding academics and affordability 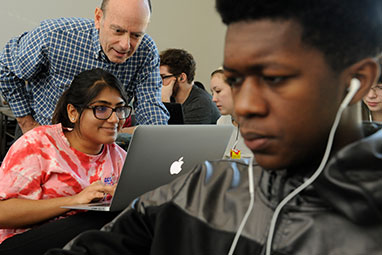 SPARTANBURG, S.C. – Wofford College continues to be recognized as one of the nation’s best colleges for providing an excellent education at an affordable price. The college is included in The Princeton Review’s “Colleges That Pay You Back: The 200 Schools that Give You the Best Bang for Your Tuition Buck,” released this week.

“We highly recommend Wofford College, and all of our ‘Colleges That Pay You Back’ schools. They stand out not only for their outstanding academics but also for their affordability via comparatively low sticker prices and/or generous financial aid to students with need – or both,” says Robert Franek, The Princeton Review’s senior vice president/publisher and lead author of the book.

Wofford President Nayef H. Samhat adds, “Wofford is committed to providing an excellent residential liberal arts education that is affordable. We offer institutional need-based and merit aid packaged with federal and state funds in a student’s financial aid package to make it possible for them to attend Wofford. We are committed to making our extraordinary and transformational educational experience accessible to all students."

Wofford has been recognized in numerous publications as a “best value college,” including Forbes and Kiplinger’s Personal Finance. The New York Times has ranked Wofford as the top South Carolina institution that is doing the most for low-income students.

The book’s editors say, “Wofford has a well-earned reputation for awarding ‘generous’ financial aid packages,” noting that 94 percent of students at Wofford receive some form of need-based aid, with the average package being $28,377. “In recent years, Wofford has distributed $45.5 million in aid among its students,” they continue. “This money comes from a variety of scholarships. The college has been commended for helping low- and middle-income students.” For this publication, The Princeton Review chose the institutions based on return-on-investment ratings it tallied for 650 schools last year. The ratings weighted 40 data points that covered everything from academics, cost and financial aid to graduation rates, student debt and alumni salaries and job satisfaction. The Princeton Review editors culled data from the company’s surveys of administrators and students in 2015-16 and from PayScale.com’s surveys of school alumni conducted through April 2016.

Wofford ranks ninth in the country for study abroad participation, according to the Open Doors Report on International Education Exchange. “We have been among the top 10 baccalaureate institutions on the Open Doors Report for the past 20 years,” Amy Lancaster, dean of international programs, says. “We are committed to connecting our students with local and global communities. Skills students learn in their study abroad experiences – resilience, intercultural awareness and empathy – are skills they will need in the workplace and in their lives as citizens of an increasingly interconnected world.”

Curt McPhail, executive director of The Space in the Mungo Center, Wofford’s professional development center, notes. “We teach students critical thinking and communications skills, then empower them with opportunities for real-world experience, building on their liberal arts education. Employers and graduate schools are looking for people with these skills.”

“Academically, undergrads find their classes to be ‘challenging’ and ‘rigorous,’” the editors write, also noting that students mentioned that while professors expect a lot of them, they have an “open door policy” that encourages interaction. One student summed up his experiences: “(Wofford is) an exceptional liberal arts school that provides each student with a well-rounded education that prepares them for a successful future.”

To review the profiles of Wofford and the other institutions included in the latest edition of “Colleges That Pay You Back,” go to http://www.princetonreview.com/colleges-pay-you-back.

Wofford’s inclusion in the publication is the latest in recognitions the college has received. In the 2016, Wofford was featured among the best institutions for undergraduate education in The Princeton Review’s 2017 edition of its annual college guide, “The Best 381 Colleges.” The college also was named a “best value college” by Forbes and Kiplinger’s Personal Finance. The college consistently appears in other well-regarded national college guides.