Sharing the stories of Spartanburg 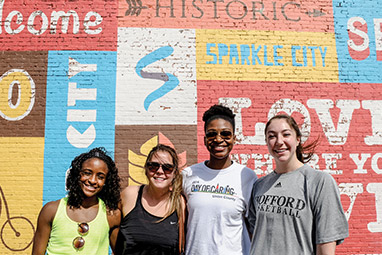 Inspired by Brandon Stanton's Humans of New York, Dr. Courtney Dorroll believes Spartanburg offers history, people and stories that need to be told. That's why she is teaching a class called Stories of Spartanburg during Wofford's January Interim.

The students in the class are not from Spartanburg, "so they get to really explore the city with a fresh perspective,” says Dorroll, assistant professor of religion and coordinator of the Middle Eastern and North African Program. “There are really unique things here. You just need to take some time and uncover them.”

Students have been encouraged to explore different features of the city that interest them on designated fieldwork days. Sophomore English and environmental studies double major Grant McClure, a native of Charleston, S.C., has focused on the arts and culture of Spartanburg.

“I’ve been interviewing artists and teachers and so far I’ve visited Converse College, the Chapman Cultural Center and USC Upstate, just to name a few,” says McClure. “This class has helped me with journalism skills. ... It promotes the ability to communicate effectively and to listen well, which are universal skills.”

Although students are encouraged to interview members of the community for their posts to the Facebook page, they also are invited to feature archived photos and videos to portray as many facets of the community as possible. Some suggestions have included videos featuring local recipes, shag dances and the sounds of the city.

“I’m curious to see where the students will go with this,” says Dorroll. “There’s room for creativity so you never know what’s going to happen with this. A student may have a totally off-the-wall idea, pursue it and post it, and it may end up being really successful.”

In addition to days spent doing fieldwork and ethnographic interviews, students read the work of local writers and spend classes discussing literature, journalism and local history. For example, Dr. Deno Trakas, Hoy Professor of Literature at Wofford, visited the class on Friday, Jan. 20, to talk about Spartanburg's Greek immigrants and his book, "Because Memory Isn't Eternal," which tells the story of the Greeks who came to the United States for economic opportunity.

“I have gained so much respect for the city itself because of its history. Its importance as a textile city has shaped the world around me," says Alec Konrad, a sophomore from Huntington, W.Va.

Dorroll plans to continue the project beyond the class with consistent posts throughout the year and other Interim groups.

“Overall, this project is compelling because in 15 years’ time, it will serve as a digital archive of the city and its culture,” says Dorroll. “You can still study where you are and find all of the humanity and empathy and world problems right here at home. There’s so much to offer here in Spartanburg."

Dorroll, who is teaching the class with her husband, Dr. Philip Dorroll, also assistant professor of religion at Wofford, tells her students: "This is your community, even if it’s for a short four-year period, and you are a part of this place. It’s not just a stopover or flyover zone.”