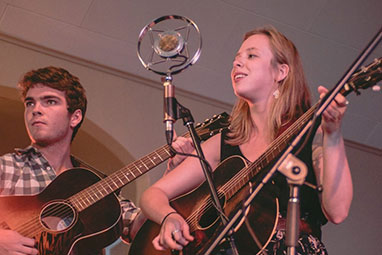 Leva, a Wofford College sophomore from Lexington, Va., traveled the country touring with The Onlies, a band based in Seattle, Wash. The four-piece group plays original and traditional fiddle-driven music with Celtic, old-time American and Canadian roots. Leva sang and played guitar as the group hopped from music festivals to radio appearances to music camps.

“I had never done that much work for my music before. We had to book everything ourselves, contacting venues and really selling ourselves,” Leva says. “We would drive for 10 hours at a time some days. It was a lot of time spent with the same people.”

Even with the long days and close quarters, Leva appreciates the opportunity to focus on her music and see parts of the country she's never seen before, including Big Sur, Calif., a remote coastal area with limited access points.

“I saw the beauty of the country in a short period of time,” she says. “I also saw the kindness and generosity of people across the country. We never had to stay at a hotel or an Airbnb. Through mutual friends, we always found someone willing to host us.”

Leva is familiar with close-knit musical communities. Her parents often played as a duo when she was a child, with her mother singing and playing guitar and her father doing the same and adding fiddle and banjo as well. She has played with her family and friends since she was 13, and she has attended the same music festival in Cliff Top, W.V., each year since she was born.

She and The Onlies even won a competition at the festival, the Appalachian String Band Music Festival, over the summer. With more than 50 bands competing, Leva and the Onlies placed in a five-way tie for first place and competed in a series of playoffs before being named the best traditional band.

“The competition was intense, and we played among musicians and bands I respect and admire. I’ve watched this competition my whole life, so winning it was honestly a highlight,” she says.

In addition to touring, Leva also recorded her first full-length album over the summer.

“We ate and slept at the studio so it was 10- to 12-hour days of recording,” she says. "There was a lot of experimenting musically, and the album developed in interesting and unexpected ways.”

The album features songs Leva has been compiling since high school, but many were written since she started college. All are original, except for an expansion on a traditional ballad. Leva says there is no definitive genre for the music, but that it is inspired by classic honky-tonk, country and traditional old-time, a long-lasting genre whose roots can be seen in most other musical genres.

“I’ve felt ‘grown up’ for a long time, but this was the first time I got to see what it would be like if I fully did music," she says. "I became more independent and decisive, and it’s made me more confident in myself.”

The album, currently untitled, is in the final stages of production with mixing and engineering.

“I know now that I want to pursue music as a career,” Leva says. “It’s the thing I like doing the most – creating and sharing music.”