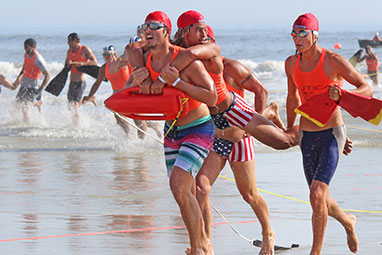 He was one of 60 lifeguards representing the Volusia Surf Lifesaving Association (VSLA) and one of more than 2,000 lifeguards who traveled from around the country to compete in the annual event. Hayworth participated in the Beach Flags event, and was part of the four-man team competing in the Landline Rescue Race finals, finishing 13th in the nation. This is Hayworth’s third summer working as one of approximately 200 seasonal lifeguards who comprise the Volusia County Lifeguard Corps.

“It was great to represent my local lifeguard corps and compete against some of the best athletes and lifeguards in the country,” says Hayworth. “Working as a lifeguard on Daytona Beach has turned out to be a good way to stay in shape during the off-season and is a nice complement to the throwing and lifting I do over summer.”

Hayworth (Wofford Class of 2017) is looking forward to another record-breaking season with the Terrier track and field team as a junior this fall. He has set several college records during his career at Wofford, including in the weight throw and shot put. He has also posted personal bests as a Terrier in the hammer and discus throw. Hayworth, a biology major, pre-med track, is the son of Kevin and Maria Hayworth.