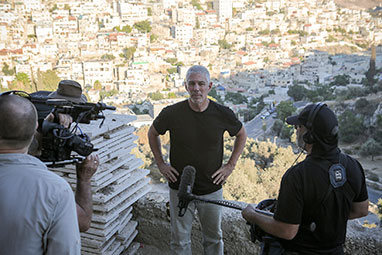 Dr. Byron McCane, professor of religion at Wofford College, is interviewed on a hillside overlooking the Palestinian village of Silwan and the valley of Kidron near Jerusalem for the CNN documentary series “Finding Jesus: Faith. Fact. Forgery.” that will air beginning on Sunday, March 1. Across the valley lies Akeldama, the “field of blood.” Tradition says when Judas brought back the 30 pieces of silver, the money was used to buy that field. (Copyright: Nutopia Ltd)
2015-02-25

SPARTANBURG, S.C. – Wofford College religion professor Dr. Byron McCane has done his share of digging for archaeological finds in the Middle East and giving his students those experiences from time to time.

Now, he will be sharing his expertise with a national audience as he participates in a CNN documentary series, “Finding Jesus: Faith. Fact. Forgery,” which begins airing at 9 p.m. Sunday, March 1.

The six-part series examines six objects purported to be from the time of Jesus, an area of expertise for McCane, the Albert C. Outler Professor of Religion at Wofford. The producer of the series, Emmy-nominated Hugh Ballentyne, called on McCane to participate because of his expertise in lands of the Bible and burial rituals in the times of Jesus.

The items have some “sizzle among pop culture in the public’s eye in the recent past,” McCane explains, “but they are ‘unprovenanced’ objects – meaning none of them come from controlled archaeological excavations. The series takes a close, deep look at each object and tries to arrive at how serious it is. What’s the takeaway?”

McCane took Ballentyne’s call in August 2014 and quickly found himself filming abroad and conducting classes via Skype for two weeks. He spent two weeks in Israel in September taping for the series. He will be included in five of the six segments.

The series is “about Jesus and archaeology, and it’s all shot in Israel – in or near Jerusalem, by the Jordan River, the Dead Sea and the Sea of Galilee,” McCane says. “I was attracted by the opportunity to work with CNN, a news organization where evidence and logic still matter,” McCane says. “As a ‘news documentary’ – that is, a fact-based presentation at the cutting edge – the series will introduce viewers to some of the latest discoveries.”

The topic of archaeology and Bible fascinate people, he adds. “Of course, they have lives and careers and commitments, so they’re probably never going to travel to Israel or go on a dig. In this series, we try to do the next best thing: to give our viewers a ‘behind-the-ropes’ experience at the sites and face-to-face meetings with the experts. It means a lot to me to be able to play a small part in making that possible.”

McCane is no stranger to controlled archaeological digs and items with provenance, and he’s no stranger to appearances on nationally televised documentaries. When he’s not teaching at Wofford, he likely is on archaeological digs in the Middle East, such as Israel’s Beth Shemesh, Zippori, Khirbet Qana, Yotvata and Italy’s Forum Romanum. He has appeared on documentaries for the History Channel, Discovery, National Geographic and more. “The last one, ‘Who Was Jesus?’, was five years ago. I thought the genre had moved on,” he says, “I had fun doing them, and I thought they were great, but I thought that time was over” – until Ballantyne called.

McCane has taken Wofford students on some of his digs, though none was involved in the CNN project. “Archaeology gives us a glimpse into what was ordinary and typical in the ancient world,” he says. “It complements biblical studies by showing us what the biblical writers took for granted and thus didn’t bother to say. We don’t dig to prove or disprove the Bible; we dig to enrich our understanding of the world of the Bible.”

He’s found everything from pottery shards to skeletons on archaeological digs.

In the CNN project, McCane was not involved in the finding or excavation of any of the six objects. “My role is to take the viewer from place to place and to help introduce the viewer to the places and sites relevant to each object.

“None of these objects came from controlled digs, so they have to be examined in different ways for the program,” he adds. “It’s very different dealing with objects where no one knows the archaeological context, and they’re trying to figure out whether it’s genuine at all. In some cases, it is not.”

McCane emphasizes that he is not the “star” of the series, only a part of it. “I was really impressed by the quality of scholars who are involved,” he says. “Being asked to participate was like being invited to sit with the cool kids in the lunchroom. My hope is that it will be interesting, entertaining and informative.

“Oh,” he adds. “I just hope I can look half as good as Chaser,” the famous border collie belonging to Wofford professor emeritus Dr. John Pilley, who has taught her more than 1,000 words, leading to her being dubbed “the smartest dog in the world.” Chaser and Pilley have been featured nationally and internationally in news media.