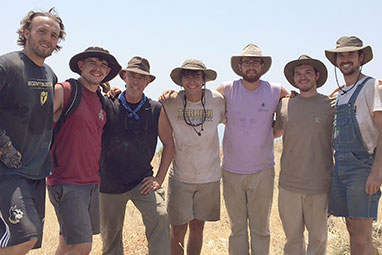 SPARTANBURG, S.C. – Mason Cantey, a Wofford College senior, migrated from his section of ancient synagogue to watch a restorer wash a section of mosaic originally believed to be white. The tiles, weathered then covered by millennia of debris and plaster, came to life.

“She scraped away centuries of packed dirt and dust, and with each swipe of her sponge, she revealed an Aramaic inscription and the partially preserved image of a Menorah with an oil lamp on each branch. Staring in amazement at all those mosaic stones, I thought about how important each experience we have, each person we meet, and each thing we learn adds to our distinctive appearance in the world,” Cantey wrote in his journal.

The find turned out to be more than a defining moment for Cantey. Excavations in the ancient synagogue at Horvat Kur in Israel dating to the Byzantine period (4th-7th c. CE) uncovered a partially preserved colorful mosaic floor. The mosaic consists of a panel showing the upper part of a menorah along with an inscription mentioning the name El’azar as well as the names of his father, Yudan, and grandfather, Susu or possibly Ooso.

Cantey was working the Horvat Kur excavation site with Dr. Byron McCane, Wofford’s Albert C. Outler Professor of Religion, along with five other Wofford students, a Wofford graduate and a host other college and university students from all over the world who are part of the Kinneret Regional Project, an international research consortium sponsored by the University of Bern (Switzerland), University of Helsinki (Finland), Leiden University (The Netherlands) and Wofford College (Spartanburg, S.C.).

“Certainly this is one of the most memorable moments in my 25 years of experience in archaeology,” says McCane, who recently was featured in the CNN documentary “Finding Jesus” and who regularly leads groups of Wofford students on archeological digs to Israel and Rome.

McCane’s co-directors from the Kinneret Regional Project chose him to be on hand on July 21 as an Israeli team came to the site to remove the mosaic for conservation and restoration. It will be prepared for inclusion – along with a stone table and stone seat uncovered by the group during a previous dig – in an upcoming museum exhibit in Israel.

The finds made in the Horvat Kur excavations significantly advance historical knowledge of a region that is crucial to ancient Jewish and Christian history and culture, Kinneret project officials say. The site is located on a hilltop a few kilometers from the northwestern shore of the Sea of Galilee, in the vicinity of ancient Jewish villages such as Magdala and Bethsaida. It is also close to important ancient Christian pilgrimage centers such as Tabgha and Capernaum.

The menorah, a seven-branched lampstand, was one of the most important religious symbols in late ancient Judaism. Inscriptions mentioning persons who made donations to public buildings were also a prominent feature in ancient public building, including Jewish synagogues, Christian churches and pagan temples. The specific combination of names in the Horvat Kur inscription has never been seen before. Although the mosaic at Horvat Kur confirms prior findings, it also adds new details. For example, the mosaic depicts an oil lamp on each of the seven branches of the menorah. The lamps are accurate for the Byzantine period, and they are symmetrically arranged around the central lamp. The lamps face the center, with the flame on the side closer to the center. The central lamp has its wick and flame in the middle of the lamp, something that is unknown in the archaeological record. Future studies will examine more closely the peculiar form of this lamp.

Unfortunately, the menorah is not fully preserved because a column base was later cut directly into the mosaic when the synagogue underwent renovations.

Preliminary analysis of the finds at Horvat Kur indicates that Christian monasteries and Jewish villages in the vicinity had close economic connections. The finds also show that rural eastern Galilee was receiving imports from regions as far away as North Africa, the Black Sea and southern and western Turkey.