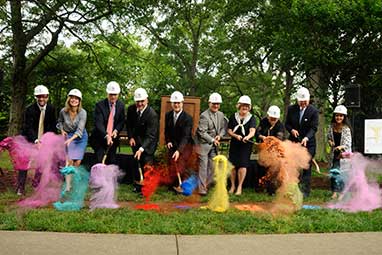 "SPARTANBURG, S.C. – Wofford alumnus and Carolina Panthers founder and owner Jerry Richardson and his wife, Rosalind Richardson, helped turn the first shovels of dirt today (Tuesday, May 12, 2015) to begin construction of the Rosalind Sallenger Richardson Center for the Arts at Wofford College during a groundbreaking ceremony on the site for the building.

The 67,000-square-foot facility will house the college’s theatre and visual arts programs and will include a 300-seat performance hall along with a museum and a student gallery. Richardson, a 1959 Wofford graduate and member of the college’s Board of Trustees, provided the gift for the center in honor of his wife’s commitment and dedication to the arts.

“I am happy and proud to be here today for this occasion,” said Richardson, a member of the Wofford Board. “I am pleased to be able to honor my dear wife, Rosalind, in this way. It is our vision that this new center will be a place that will enhance the student experience here at Wofford; that it will be a place where students and faculty will come together to create and learn.”

“The Rosalind Sallenger Richardson Center for the Arts is a significant symbol of the imagination, invention and collaboration that are essential to a vibrant national liberal arts college such as Wofford College,” President Nayef Samhat said before he was joined by Mr. and Mrs. Richardson; their daughter, Ashley Richardson Allen, a member of Wofford’s Board; Board Chairman Harold Chandler; and faculty and student representatives to turn their shovels of rainbow-colored dirt.

“A strong arts program contributes to the creative approach that is critical to success in today’s complex world, no matter what fields or disciplines our students pursue in their college careers and beyond,” Samhat added.

Samhat continued: “As we enhance the vibrancy of the Wofford community, both in and out of the classroom, we must provide a strong presence for the interdisciplinary, creative activities supported by theater and the visual arts – programs that will be housed in this beautiful facility. This center will support the arts and creative work in all disciplines.

“The gift that alumnus and board member Jerry Richardson has provided to Wofford College in the funding of the Rosalind Sallenger Richardson Center for the Arts is so much more than for bricks and mortar,” Samhat added. “This gift supports our commitment to a Wofford education as a lifetime endeavor and will help us increase diversity and expand our scope of reaching prospective students, alumni, artists and performers, and the broader community.”

“What a wonderful way to embark on a new journey for Wofford College,” Chandler told the crowd gathered for the groundbreaking. “A great building of study, of enjoyment and enlightenment, a place where young people will learn more of the joys of life, both while here at Wofford and also as they leave here and become well-rounded and dedicated servants of our world, like you, Mr. Richardson.”

He praised Samhat and his wife, Prema, for their commitment to the college and working with the Richardson family to make the Center for the Arts a reality, calling Mrs. Samhat Wofford’s “First Lady.”

He added, “Importantly, Mrs. Richardson, you will be forever our First Lady of the Arts at Wofford College. This beautiful place of work and celebration of life embodied in the full spectrum of the arts, this Rosalind Sallenger Richardson Center for the Arts, will forever remind us of your love of life, your love of family and, indeed, your love of Wofford. What more can an individual endow unto others?”

The first – a 31-foot-long, 8-foot-wide, 4-foot-tall chandelier-like sculpture in beautiful autumn colors of red, gold, orange and green selected by Mrs. Richardson – will greet visitors as they enter the building’s lobby. The other – in the same fall colors – will be a 14-foot-tall, 8-foot-diameter piece that will hang in the monumental stair between floors. Both pieces are being custom-made specifically for the building.

The Center for the Arts will feature a material pallet of masonry, stucco and copper. Large areas of glass will connect the interior to the outdoors, filling art studios with natural light and creating transparency and openness between spaces and across an outdoor sculpture garden. The building will be energy efficient and will feature high-performance theatrical lighting, rigging and audiovisual systems.

Key elements of The Rosalind Sallenger Richardson Center for the Arts are:

The building’s namesake, Rosalind Sallenger Richardson, a native of Florence, S.C., attended Winthrop University in the late 1950s, and her husband established a fully endowed scholarship there in honor of his wife. Mrs. Richardson was awarded an honorary bachelor of arts degree from Winthrop in 1996. The Richardsons have two children, Mark Richardson and Ashley Richardson Allen, a member of the Wofford Board of Trustees; their son Jon Richardson died in 2013. Grandson Johnson Richardson played football for Wofford and graduated in 2010, and granddaughter Rose played volleyball for Wofford and graduated in 2013.

Construction of the Rosalind Sallenger Richardson Center for the Arts is expected to be completed in February 2017.

In the coming months, Wofford also will break ground on two other major construction projects – the Jerry Richardson Indoor Stadium, which will house a new basketball arena and a volleyball arena, and the new Greek Village for the college’s fraternities and sororities and other campus-wide social activities.