‘The New Terrorism: How to Fight It and Defeat It’ 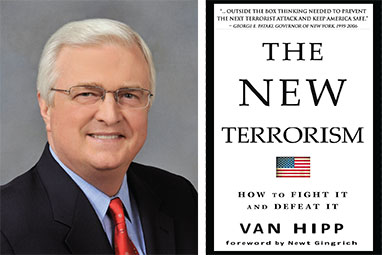 SPARTANBURG, S.C. – Van Hipp, a 1982 graduate of Wofford College and chairman of American Defense International Inc. in Washington, D.C., will speak at Wofford at 7 p.m. Wednesday, March 11, as part of his South Carolina book tour for his latest book, “The New Terrorism: How to Fight It and Defeat It.”

The program, which is free and open to the public, will be held in Leonard Auditorium in Main Building on Wofford’s campus. It will be followed by a public reception and book signing in the reception room in the Papadopoulos Building.

Hipp has been immersed in defense and security matters since 1990 when he was appointed deputy assistant secretary of the Army for reserve forces and mobilization. He was named by then-Secretary of Defense Dick Cheney to be the principal deputy general counsel of the Navy. A veteran of the U.S. Army, Hipp served on active duty in both Operation Desert Storm and Operation Restore Democracy. He is a frequent writer and speaker on defense and international policy issues.

Hipp also sponsors the Hipp Lecture Series on International Affairs and National Security at Wofford, the first installation of which was the 2011 Republican Presidential Candidates Debate held at the college. “We are living in an era in which terrorism demands our constant attention. Few people in North America or Western Europe have the capability to study and analyze the wide scale number and kinds of threats facing us as a civilization,” the book’s publisher, Countinghouse Press Inc., writes. “Even fewer can make constructive suggestions on how to meet and eliminate these threats in an effective way. Van Hipp discusses the full range of threats. Not just the constant threats of suicide bombers, airplane hijackings and odious beheadings, but the threats from military and cyber sources. He stresses the need to upgrade our missile defenses, protect ourselves from cyberattacks and eliminate the dangers posed by our porous borders. He calls on our national leadership to rise to the challenges posed by these dangers and to undertake the steps that will protect us all from these threats.”

Rear Admiral John Stufflebeem, USN, retired, former commander of the U.S. Sixth Fleet, says of the book, “A very thought provoking treatise on the full spectrum of threats facing our nation now that will only escalate in sophistication and frequency in the future as the threats mature. Van Hipp has written a compelling book to understate the depth and breadth of prescriptions our national leaders must undertake if we are to assure our national security and prosperity.”

Adds former Speaker of the House Newt Gingrich, who wrote the book’s forward, “We should measure every potential leader, and especially every potential commander-in-chief, against the Van Hipp standard as we prepare for 2016 and beyond. And they should all read this book.”