Sustaining and Spreading the Revolution at Wofford College 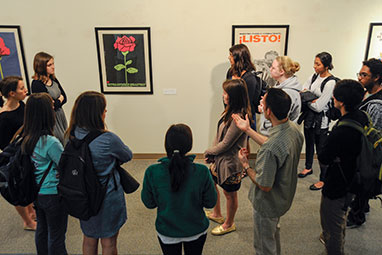 SPARTANBURG, S.C. – After the recent announcement revealing the reinstatement of diplomatic relations with Cuba, a unique art exhibit, “Sustaining and Spreading the Revolution,” now on display at Wofford College, provides the background for the political turmoil and instability experienced within the country.

The exhibit, loaned to the college by collector Lindsey Webster of Spartanburg, S.C., is located in the Martha Cloud Chapman Gallery in the Campus Life Building and in the Sandor Teszler Library Gallery and will be on display through the month of March.

Featured in the exhibit are Cuban propaganda posters of revolutionary themes such as solidarity and anti-colonial/anti-American movements with an emphasis on the importance of the communist movement worldwide.

“On my first trip to Cuba four years ago, I saw a poster saying ‘Free Angela’ for sale in an outdoor book market and fell in love immediately,” says Webster. “I have been fascinated by these posters and their vocal messages in support of the Civil Right Movement in the U.S. and the anti-apartheid movement in South Africa.”

Since her initial trip, Webster has visited Cuba six more times. She acquires new pieces through Cuban art dealers and also trades with a few collectors in Europe.

“Visually, I find the works by Rene Maderos stunning. He portrays everyday life for the Vietnamese people during the war in a way that is both poignant and beautiful,” says Webster.

According to Webster, the works in this exhibit were largely produced in the 1960s and 1970s, which was the period of peak production for political posters. Featured pieces have been distributed in four languages to 87 countries and include work by Félix Beltrán and Rene Maderos, both internationally acclaimed artists.

These posters are presented in conjunction with Dr. Rachel Vanderhill’s government class, which focuses on the study of violent and non-violent revolutions around the world and resulting transitions to democracy or regime change. Vanderhill, who is an assistant professor of government at Wofford, explains that throughout history, governments have used propaganda to influence and control their subjects, but the Cuban posters on display are unique in their dually simple and complex designs and vibrant colors that show the individualized artistry of the period.

“I appreciate how the posters graphically depict the ideological conflicts of the time period,” says Vanderhill. “The posters demonstrate how Cuban artists developed their own visual style separate from the social realism of Soviet communism. The political messages are very direct and powerful in many of the posters.”

Vanderhill is thrilled to have the exhibit so accessible to her students at Wofford College. According to Vanderhill, it allows students to study and think about the Cuban Revolution and its global impact in a tangible way.