Her nature: ‘If it weren’t for the taste, I’d be sorry 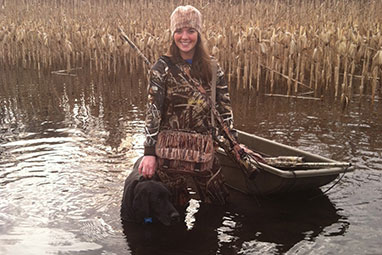 Lee Massey and "Nap," the Laborador retriever, who accompanied Massey on her first duck hunting trip.
2015-03-02

SPARTANBURG, S.C. – Lee Massey, a sophomore from Raleigh, N.C., needed to say she was sorry to the ducks. Well, she didn’t really need to say it – as a first-year student, she was assigned by George Singleton, Wofford’s John C. Cobb Professor of Humanities, “to write an apology paper to something that is funny.”

Massey decided to use her love a hunting ducks as the basis for her apology, though her paper read more like a “why I like hunting ducks” essay. “My Nature: If It Weren’t for the Taste, I’d Be Sorry” was the title of the essay, which claimed a two-page spread in the January-February 2015 edition of South Carolina Wildlife magazine, along with photographs of Massey and her dad on a hunting trip.

“Honestly, I love to hunt and I thought it was something that no one else would think of (to write about), so I decided to go with that idea,” says Massey, who hasn’t declared a major yet. While she doesn’t aspire to be a writer, Singleton thought it was a publishable paper and got Massey in touch with the magazine. “It all fell into place pretty quickly after that,” she says.

In the essay, she describes being 13 years old and going on her first duck hunting trip with her brother, her dad and her dog. “I shoulder my gun and wait a couple more seconds,” she writes of waiting for a duck to appear. “It appears in front of me for a brief moment, and I know this is my time to shine. I line the barrel up just perfectly and pull the trigger, hoping for the best. As a shock to everyone, my shot is perfectly on target and the teal lands in the water, causing a big splash. I cringe for a second at the thought that I just killed a living creature, but my mood quickly changes when I hear my dad and brother congratulate me.”

As for her apology to the ducks, Massey writes: “It may come across as insincere, considering that I still shoot them anyway, but if I could write an apology to let the ducks know I’m sorry, I would. I’d explain to the ones that fly away that I feel remorse for shooting their family and friends, leaving them to fly all alone. I’d tell them that as much as I hate to admit it, they could easily be next. I would tell them to watch their backs and try to learn from their peers’ mistakes. And most importantly of all, I’d tell them that they taste quite delicious.”

Massey says that while she has no plans to go into writing or publishing, “you just never know what could happen.”