Paving their own way 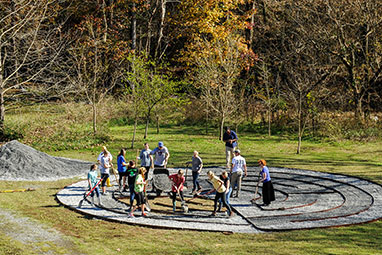 It’s an overcast day, but 16 Wofford students gather with their Humanities 101 professor, Dr. Christine Dinkins, at Wofford's Goodall Environmental Studies Center at Glendale Shoals Preserve. Shoveling gravel and positioning bricks, the students work at a relaxed but diligent pace. Several trucks are parked nearby, and one projects upbeat music across the worksite, where a 40-foot labyrinth is taking shape near the Lawson’s Fork Creek.

Intended to promote mindfulness and empathy, the labyrinth is the impact project of the Philosophy in Action class, a first-year learning-living community. The labyrinth opened on Thursday, Nov. 19, with a launch party that included a showing of the movie Inception, a bonfire with s’mores and free t-shirts to the first 30 attendees.

The labyrinth is wide enough “for you and your dog,” says co-project manager Mary Burgess Harrelson, a first-year student from Spartanburg, S.C.

Buddy Anderson, construction manager, a first-year student from Clover, S.C., says that this project is unlike anything he’s done before, despite his experience in construction:

“This is pretty new [for me]. I worked construction during the summer, but this is different. I got materials and called the quarry to get the rock. The bricks we are using were actually part of the old mill here at Glendale,” he says.

“Professor John Lane told us that the bricks were there, and they were at the bottom of a steep slope, so it took eight students to form an assembly line and get them out,” says Dinkins.

Dinkins explains that while she shares teaching responsibility with FYI instructor and Director of Counseling and Accessibility Services Perry Henson, the students have shouldered the entire project from its beginning to now:

“They conceived all of this. The students did it all, and I don’t really know some of what’s going on… which I’m proud of. They really have done it all,” she says.

To begin the process, students formed teams, with each student joining two teams. This increased communication and cohesiveness within the group. These bonds have extended beyond the classroom says Ashley Cox, a first-year student from Moore, S.C.

“Coming to Wofford, we didn’t really know what a living-learning community would entail,” she says. “My LLC class is the class I’m the closest with – because of projects like this, where we are building things together. With that, we’re building relationships, too.”

All of the students in the LLC live together in Marsh Hall and have become so close that they have elected to continue learning together in the spring semester, all signing up for the same philosophy course.

While each LLC has a budget, this project has cost the class about $2,000, which exceeds their funding and requires fundraising. According to Cox, who is on the marketing and finance teams, the group has raised about half of the costs required to fund the labyrinth. They are still collecting funds. To give, visit the Facebook page, “Wofford Labyrinth at Glendale Shoals.”

Cox says she didn’t expect to have this type of impact on her community so early in her college career.

“I didn’t think we were going to be doing anything hands-on," she says. "I think we all kind of underestimated what we were doing here. We didn’t think it would be this monumental. It’s nice to say this is the impact I left as my first step into Wofford. It will be exciting to see what follows in the next few years.”

Dinkins says that the Wofford Environmental Studies Department, the Spartanburg Area Conservancy (SPACE) and the Palmetto Conservation Foundation have been “incredibly helpful” in supporting the project, and she feels that the labyrinth will have a deep community impact. But mostly she is proud of her students.

“Through this project, I’ve watched them learn and grow. They just had a vision and they went for it,” says Dinkins.