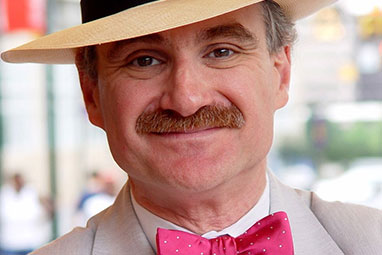 Murray Horwitz, a Tony, Obie, Emmy and Grammy award winning playwright, lyricist and NPR broadcaster, will be in Spartanburg on Wednesday, Feb. 11, to share “An Evening of Sholom Aleichem,” a one-man show that he also has performed at The Kennedy Center, the Manhattan Theatre Club and the New York Shakespeare Festival/Public Theater. Horwitz’s Spartanburg premier, presented by Wofford College and the Wofford Theatre, will be held in Main Building’s Leonard Auditorium at 7 p.m. The event is free and open to the public.

Horwitz will be on campus for three days talking with theatre students about careers in the field and with other members of the Wofford community on the value of a liberal arts education. A session with Horwitz moderated by Dr. Mark Ferguson, chairman of the Wofford Theater Department, on Thursday, Feb. 12 at 11 a.m. in the McMillan Theater in the Campus Life Building, also will be free and open to the public.

Russian-born Solomon Rabinowitz took the pen name Sholom Aleichem from the traditional Hebrew greeting “peace be upon you.” The popular Yiddish writer shared stories of 19th-century Jewish life. American audiences know his Tevye stories made famous by “Fiddler on the Roof,” but they span much more — from hilarious tales of train rides and mud production to bitter monologues on assimilated Jews and anti-Semitism. “An Evening with Sholom Aleichem” is a one-man show spotlighting these stories as well the talents of actor and comedian Horwitz.

Horwitz, a former clown with the Ringling Brothers and Barnum and Bailey Circus and co-author of the 1978 Tony Award winning musical “Ain’t Misbehavin’,” has acted on Broadway, in television and in motion pictures. A graduate of Kenyon College, Horwitz is the creator of several NPR series, including “Wait, Wait… Don’t Tell Me.” He wrote the song lyrics for John Harbison’s “The Great Gatsby” at The Metropolitan Opera and wrote and directed “Of Thee We Sing: The Marian Anderson 75th Anniversary Celebration for Washington Performing Arts,” where he is the director of special projects. Horvitz appears as a commentator on NPR and as a panelist on public radio’s “Says You!”