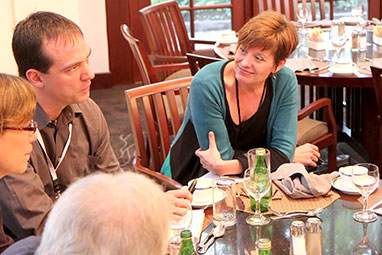 SPARTANBURG, S.C. — It's not just about how students are learning in her classes and labs. It's not just about the curriculum in the Department of Biology or at Wofford College. For Dr. Ellen Goldey, Kenan Professor of Biology, it's about improving the educational model so that all of the nation's students benefit.

"It may sound corny, but for me it's about getting better collectively for the good of our country," says Goldey. "We've been doing really good work here at Wofford, and we need to share it. Conversely, there is much that we can learn from the good work at other institutions."

As a PULSE (Partnership for Undergraduate Life Sciences Education) Leadership Fellow, Goldey is one of 40 fellows selected from across the country to promote reform in undergraduate biology education — sharing best practices, providing faculty development and using assessment to guide reform. Goldey believes PULSE, a collaborative effort between the National Science Foundation (NSF), the National Institute of Health (NIH) and the Howard Hughes Medical Institute (HHMI), is an ideal vehicle for building collaborative networks among various campuses, agencies and disciplinary societies to build a better future for all students.

According to Goldey who helped organize and facilitate the recent Southeastern Regional PULSE (SERP) Institute, the aim is to stimulate change in undergraduate biology education by bringing diverse institutions together to transform their program in ways that best suit their mission and culture. Goldey's presentation on the SERP project was well received at a recent Gordon Research Conference on Undergraduate Biology Education, and a video also provides confirmation of the positive impact of this work.

Teams from each of 20 diverse institutions included teaching faculty, department heads and senior-level administrators. The team concept, with both grassroots leaders and traditional decision-makers, is having an even broader impact than imagined.

"This has gained legs beyond biology," says Goldey. "We have provosts and deans outside of the sciences around the table, and they see the value in what we are doing. Many left the institute already thinking of ways to adapt the lessons and tools from the Institute to other areas."

One of the buzzwords during the institute was "metacognition." Research has shown that students who develop self-awareness about their own learning become metacognitive; they are more resilient, perseverant and successful when confronted with the academic, social and cultural challenges of college. According to Goldey, developing metacognitive skills is beneficial to all students, but it is critical to the success of first-generation college students, minority students and students who are underprepared for college-level classes.

"At the institute we had teams from community colleges, liberal arts colleges, minority serving institutions and research universities. We have many of the same challenges, and we can learn from experts and from each other," says Goldey. "We know, for example, that students of color have an increased likelihood of not persisting in the STEM fields, even when they enter college with the desire to major in one. We have a moral imperative to learn about and employ what works well for these students. My work with PULSE is just one way that Wofford is supporting that type of collaborative work in our region."

Goldey's selection to be a PULSE Leadership Fellow resulted from the award-winning reform of Wofford's biology program that began when Goldey received a grant from the NSF to engage with her colleagues to reimagine biology education at the college.

"One of the questions that guided our efforts," says Goldey, was, "what would it look like if our students were actually doing science instead of just hearing about it?'"

In 2009 Wofford's biology faculty launched their first new course, Biological Inquiry, also known as Bio 150, which for majors leads to a suite of revised core of courses (Bio 151, 212 and 214) that build a solid foundation for upper-level courses.

"We really emphasize engaging students in employing the methods of science, reading scientific literature, quantitative reasoning, interpretation of empirical evidence, writing, teamwork and public speaking," says Goldey. "Studies have shown that students retain much more subject knowledge when it is learned in such an engaging context."

Wofford's biology curriculum is an exemplary model of what's right in science education, and Goldey eagerly shares it at conferences and in publications. Even months after the recent SERP Institute, she's still excited that the teams that attended left with action plans and the inspiration to involve student in authentic, open-ended research. They were empowered to "move mountains" back at their own institutions.

"Wofford students just assume that what we're doing in our program is the norm, but we can see the changes in students, such as more students pursuing research because they're excited to construct new knowledge in biology, medicine, and more," says Goldey. "It has been very rewarding to help other schools engage in this type of reform effort."

Although encouraged by the success she's seeing, Goldey realizes that change is difficult. Still, she knows from experience that it can happen — and with the future of higher education at stake — must happen.
And that's just what she and the other PULSE fellows are supporting — one department at a time.