May events at Wofford College 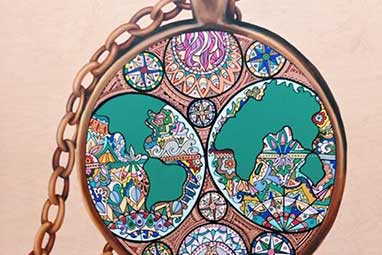 Mills Brown, a senior at Wofford majoring in English and art history with a concentration in studio art, is among students presenting their capstone exhibitions in May. In this series, Brown explores an interest in cartography and celebrates the richly diverse forms and symbols that can be discovered within a map. These four large stained-wood pieces are studies on a variety of themes - including feminism in art and literature, Buddhism and the mandala form, and the symbolism of ancient mythologies, such as astrology.
2015-04-30

SPARTANBURG, S.C. – A variety of concerts and end-of-the-academic-year activities highlight the May calendar at Wofford College.

Sunday, May 3
Hammock-a-thon at Glendale Shoals
11 a.m.-2 p.m., Glendale Shoals
Wofford’s Environmental Studies Program will host the second annual Hammock-a-thon Sunday at Glendale. The event is free and open to the public. Local band Bearcastle Plantation will provide live music. Other activities include free hot dogs on the grill, a kids’ activity table, and the Local Hiker will be selling hammocks and other fun outdoors gear. This is the last Glendale Shoals event of the academic year.

Tuesday, May 5
Troubadour Guitar Series: Sweden’s Celia Linde
7-9 p.m., Leonard Auditorium, Main Building
Celia Linde tours frequently throughout Europe, the United States, Canada, Finland, Scandinavia, Russia and Turkey. She is often the featured artist on National Swedish Radio-Television and also has been profiled on the BBC, Denmark’s Radio, Turkish Radio-Television (TRT) and as well as New York’s WNYC and other international radio stations. Her concert at Wofford will be free and open to the public.

Thursday, May 7
Phi Beta Kappa Initiation
4-5:15 p.m., Reception Room, Papadopoulos Room
New members of Phi Beta Kappa will be initiated at this event. Wofford is home to one of the nation’s 283 Phi Beta Kappa chapters.

Sunday, May 17
Commencement Exercises
9:30 a.m., Lawn of Main Building
NBC national correspondent Craig Melvin, a 2001 Wofford graduate, will be the featured speaker at Commencement Exercises, where some 390 graduates will receive their degrees. Wofford also will present honorary degrees to alumnus Henry C. Giles Jr. and Hugh Lane Jr. The rain location will be Benjamin Johnson Arena.

Through Monday, May 18
Studio Art Senior Capstones featuring Kaylea Bollinger, Victoria DaSilva and Katie Harmon
Campus Life Building
Artist Talk & Reception will be held on Thursday, May 7, from 2 to 3:30 p.m. in the Campus Life Building.