Wofford student-athlete gives his teammates credit for his national recognition 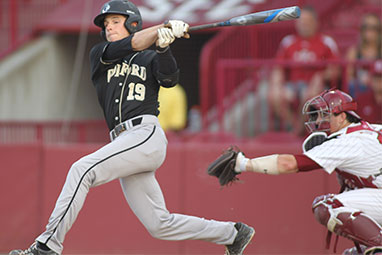 SPARTANBURG, S.C. – Wofford College student-athlete Matt Ramsay has been named to the 2015 Capital One/CoSIDA Academic All-America Baseball First Team, which recognizes the nation's top student-athletes for their combined performances athletically and in the classroom.

According to Ramsay, however, this recognition is not the highlight of his baseball career. “Being part of the program's transformation will forever be one of my greatest accomplishments; I consider myself extremely lucky that I was able to do it alongside my best friends,” he says.

A Wofford graduate in the class of 2015 and native of Hudson, Ohio, Ramsay says that the team’s work ethic — on the field, in the classroom, in the batting cage and the bullpen — is the reason the team posted the best season in college history. He attributes his recent national recognition to the team’s support.

“This baseball program was absolutely the perfect fit for me,” says Ramsay. “It was easy to work hard at Wofford because everyone else was. I’m a member of an entire team of overachievers.”

Ramsay started 60 games this season with 49 as the designated hitter and 11 as an outfielder. Among Southern Conference leaders, he was second in batting average at .359 and was second in on-base percentage. He led the league in hits with 84, was seventh in runs scored and fourth in walks received. His 84 hits rank as the fifth most in a single season at Wofford. He was named second team All-Southern Conference.

To be eligible for Academic All-America consideration, a student-athlete must be a varsity starter or key reserve, maintain a cumulative GPA of 3.30 on a scale of 4.00, have reached sophomore athletics and academic standings and be nominated by the sports information director.