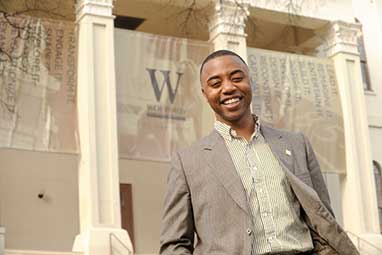 SPARTANBURG, S.C. – Wofford College junior Donovan Hicks of Spartanburg has been awarded the prestigious Truman Scholarship, providing him with $30,000 toward graduate school and the opportunity to participate in professional development programming to help him prepare for a career in public service leadership. The announcement was made today (Wednesday, April 15, 2015) by the Harry S. Truman Scholarship Foundation.

Hicks, who is majoring in government and finance, plans to attend law school for a dual degree in law and public policy with the ultimate goal of working on issues of education policy.

He also is one of 10 people admitted as a 2015 Public Policy and International Affairs Law Fellow at the University of California Berkeley this summer. The program provides student training and financial support for graduate school and facilitates ongoing professional development.

As a Bonner Scholar at Wofford, Hicks provides 140 service hours per semester to South Carolina Legal Services. He also has served as vice president of Wofford Campus Union student government organization and is director of Student to Student (S2S), a local community service initiative at Boiling Springs High School that aims at positioning students so that college is an option for them. In addition, Hicks works with Reformed University Fellowship (RUF), a Christian outreach ministry on campus.

Hicks, who has completed two summers of service, one in New York City mentoring inner-city children with Project Morray and another doing website and communications for South Carolina Legal Services while in India, also spends time sharing his love of Wofford with prospective students as a Wofford Ambassador.

The Harry S. Truman Scholarship Foundation was created by Congress in 1975 to be the nation’s living memorial to President Harry S. Truman. The foundation has a mission to select and support the next generation of public service leaders. The Truman award has become one of the most prestigious national scholarships in the United States.

Annually, candidates for the Truman Scholarship go through a rigorous, multi-stage selection process. In 2015, there were 688 candidates for the award nominated by 297 colleges and universities. The 200 finalists for the award were interviewed in March and early April at one of 16 regional selection panels. Just 58 new Truman Scholars were selected in 2015. They will receive their awards in a ceremony on Sunday, May 24, at the Harry S. Truman Presidential Library and Museum in Washington, D.C.