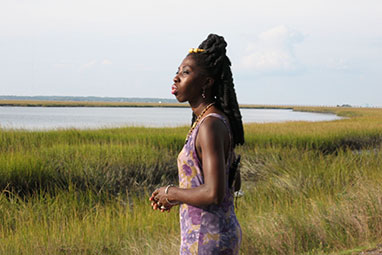 Queen Quet Marquetta L. Goodwine, the elected leader of the Gullah/Geechee Sea Island Nation, and members of her entourage will perform at Wofford.
2015-01-27

SPARTANBURG, S.C. – February will be a busy month at Wofford College with the Dunlap Chamber Music Series, the Sankofa African-American Museum on Wheels, author Thomas Pierce ’06, and Queen Quet of the Gullah/Geechee Sea Island Nation highlighting the schedule.

For more information, contact Laura Corbin at woffordnews@wofford.edu or 864-597-4180

Thursday, Feb. 5
Opening Reception: A History of Diversity at Wofford
5-7 p.m., Martha Cloud Chapman Gallery, Campus Life Building
A collection of moments, stories and reflections of Wofford's history regarding diversity and inclusion. A community-based exhibition encouraging active participation of the viewers. The exhibition runs through Feb. 28.

Thursday, Feb. 19
Chinese New Year Celebration
5-7 p.m., Burwell Dining Hall, Burwell Building
Chinese New Year is the most important holiday not only in China but also in East Asia and around the world. The New Year Day falls on Feb. 19. Attendees will enjoy highlighted performances, fun activities and prizes. This is the year of the Ram. In traditional Chinese culture, the ram represents being gentle and calm in the face of new beginnings.

Thursday, Feb. 26
Writers Series: Thomas Pierce ’06
7:30 p.m., Olin Teaching Theater, Franklin W. Olin Building
Thomas Pierce’s short stories have appeared in The New Yorker, The Atlantic, The Oxford American, Subtropics, and elsewhere. He has reported for National Geographic and for NPR programs including “Morning Edition” and “All Things Considered.” Born and raised in South Carolina, he received his undergraduate degree from Wofford College and an M.F.A. from the University of Virginia as a Poe/Faulkner Fellow. At Wofford, Pierce was the 2005-06 Presidential International Scholar and received the prestigious NPR Kroc Fellowship. His short story collection, “Hall of Small Mammals,” was published from Riverhead Books in early 2015. He lives in Charlottesville, Va., with his wife and daughter.

Through Feb. 27
Ruins in Rebirth: Photography of Glendale Shoals
Sandor Teszler Library Gallery
Glendale, once a textile town and industrial hub, has been a rich source of history in Spartanburg County. After the mill burned down in 2004, however, Glendale has risen from its factory-forged ashes to reclaim its identity as a place of natural beauty. See this special town come to life through photographs from its visitors and supporters. Glendale is more than meets the eye – through the lens of a camera.

Through Feb. 28
A History of Diversity at Wofford: Black History Month Exhibition
Martha Cloud Chapman Gallery
A collection of moments, stories and reflections of Wofford's history regarding diversity and inclusion. A community-based exhibition encouraging active participation of the viewers.