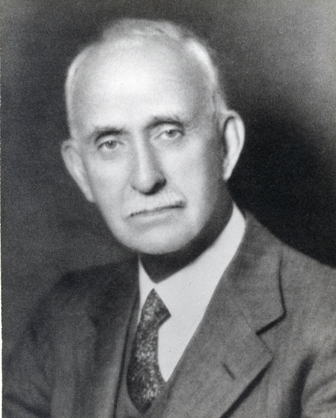 The longest-serving president in Wofford’s history, Henry Nelson Snyder led the college for four decades, saw the student body more than double in size, and brought academic rigor and respectability to the college.

Snyder was born in 1865 and grew up near Nashville, Tennessee. He enrolled in Vanderbilt University in 1883, when the university was only eight years old. While there, he studied Greek, Latin, and English under a group of professors, many with Wofford connections. He remained at Vanderbilt for graduate study and planned to go to Germany to work on a doctorate. In 1890, however, he received an offer to teach English and German at Wofford.

Arriving in Spartanburg in the fall of 1890, Snyder found a campus that looked older than its 36 years. Many of the homes and buildings looked worn and neglected, and the unpaved sidewalks turned to mud with the smallest amount of rain.

Snyder eventually made it to Germany, studying at the University of Gottingen in 1900-1901 and traveling in Europe before returning to Wofford in the fall of 1901. He determined to continue work on his dissertation back in the United States and return to Gottingen in the summer of 1903 to finish work on his doctorate. However, President James Carlisle had submitted his resignation as president in the summer of 1901, though the trustees let it sit on the table for a year before selecting Snyder as his successor. Thus, in June 1902, at age 37, Henry Nelson Snyder became Wofford College’s fourth president.

In his first year as president, the student body had 196 members, and 27 students, including two women, took bachelor’s degrees at the end of the year. Snyder sought to be a different kind of president than his predecessor. Carlisle had served as a moral leader of the campus and as chair of the faculty, but took on almost no administrative duties. While Snyder did not shrink from moral leadership and was a gifted public speaker, he readily assumed the administrative duties of the presidency while continuing in the classroom. Essentially, he became the first modern college president. Historian David Duncan Wallace noted that Snyder had the ability to keep the faculty harmonious, maintain good relationships with the state’s Methodist clergy, and possessed tact, character, and moderation. These abilities proved the trustees’ confidence in him. Early in his tenure at Wofford, Snyder declined offers of a presidency of another college and of a professorship at Stanford University.

Snyder faced a deteriorating campus and had few funds to modernize it. He knew the college needed to grow, both by adding departments in which the curriculum was weak and in the number of students. He began to raise funds for new and refurbished buildings, something no previous president had attempted. Main Building was remodeled in 1902, Cleveland Science Hall constructed in1904, the Whitefoord Smith Library in 1910, and the James H. Carlisle Memorial Hall, the first freshman-sophomore residence hall, was opened in 1912. In particular, Snyder believed the new library and science building were critical to improving the college’s academic standing.

Snyder became very active in Methodist higher education circles as well as in professional educational associations. He was elected to represent South Carolina at General Conference in every quadrennium from 1906 to 1940, except one. He was a member of the unification commission of the Methodist Church and was present in 1939 at the uniting conference. He was a long-time member of the church’s hymnal commission, and was involved in producing the first hymnal for the denomination, published prior to reunification.

Snyder’s tenure saw continuous change in student life. In 1903, a group of students called the Philanthropeans petitioned the trustees and faculty to ban fraternities and other secret societies. After a confrontation between fraternity and anti-fraternity men led to a severe split in the student body, the trustees banned membership in any secret society after 1906. Students occasionally defied this prohibition, and some students were expelled for joining fraternities during this time period. However, by 1915, pressure mounted on the trustees to permit fraternities again, and the faculty passed new rules that allowed them to operate.

Snyder amassed a group of faculty members who served together for the bulk of his administration. Five men who took their appointments before he became president served with him for extended periods of time, including Joseph Augustus Gamewell (Latin), Arthur Galliard Rembert (Religion and Greek), Daniel Allston DuPre (geology), John George Clinkscales (mathematics) and David Duncan Wallace (History). Each of these men served at least into the 1930s. Others joined early in the Snyder administration, including Coleman B. Waller (chemistry), William L. Pugh (English), Edward H. Shuler (applied mathematics), James A. Chiles (modern languages), John L. Salmon (modern languages), and A. M. Trawick (religion). These professors made up the core of the faculty for nearly forty years.

Snyder saw his share of crises and difficulties in forty years. During World War I, the army effectively ran the student body through the Student Army Training Corps, the predecessor to ROTC. Mobilization was nowhere near as universal as during World War II, however. The Great Depression saw the college struggle to meet its payroll and other bills. ROTC actually proved to be critical in continuing to operate the college in the 1930s. Most students were members, and the stipend and uniforms that the army provided to them helped them make ends meet. For many students, the stipend helped keep them in college.

The crowning achievement of the Snyder era at Wofford came in his last two years as president. On January 14, 1941, a chapter of Phi Beta Kappa was installed at the college. This recognition, more than almost anything else, affirmed the college’s standing as an institution of superior academic quality.

Snyder suffered a heart attack in the summer of 1940, but continued in office for nearly two more years. In his final years in office, he and the trustees started planning for a development campaign, but the outbreak of World War II postponed the effort. Snyder played a quiet but influential role in the selection of Walter K. Greene, who graduated from Wofford in 1903, as the college’s fifth president. Snyder lived on campus for the rest of his life, continuing his activities in support of education in the Spartanburg community. He played a leading role in starting the Spartanburg County Foundation. In the late 1940s, he was featured in a radio program, “From Dr. Snyder’s Study” on Spartanburg radio station WSPA. Snyder died on Sept. 18, 1949.