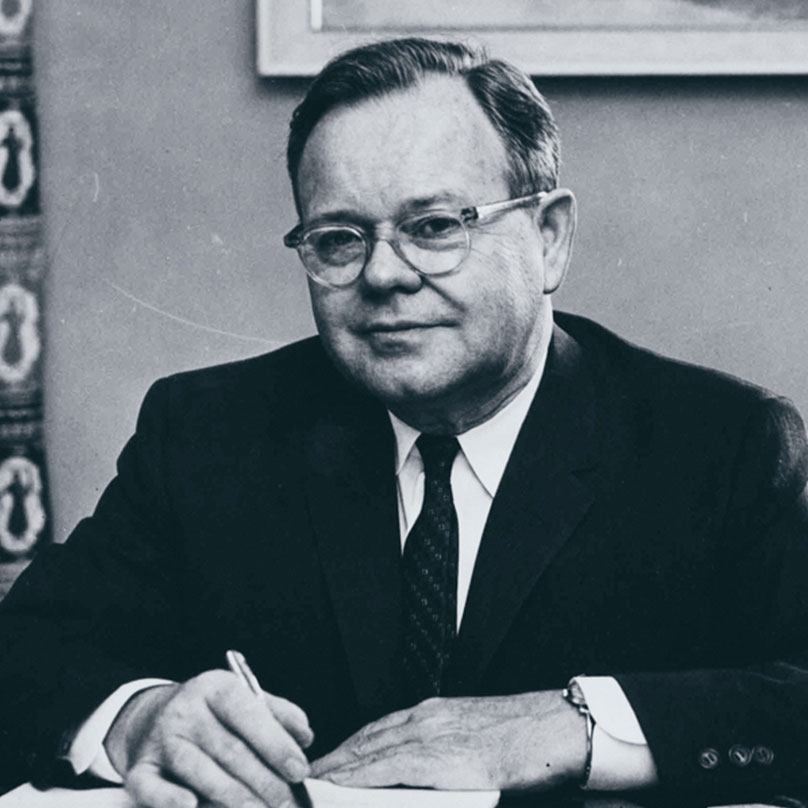 Charles Marsh oversaw some of the most far-reaching changes in the college’s history. During his tenure, the college desegregated voluntarily. The student body grew to about 1,000 students. The college built several new residence halls and academic buildings and renovated others. A group of young faculty joined the college, most of whom remained at Wofford for their entire career. Near the end of his term, the college implemented the Interim, the most significant curricular change in decades. Throughout all of this, Marsh provided steady leadership during a decade of change.

Charles Franklin Marsh was born in Wisconsin in 1903 and graduated from Lawrence College in Appleton, Wisconsin in 1925 with Phi Beta Kappa honors. He continued his studies in economics at the University of Illinois, where he earned his MA in 1926 and his PhD in 1928. He joined the economics faculty at the College of William and Mary in 1930, where he remained until called to Wofford’s presidency. In his last six years at William and Mary, he was dean of the faculty. Marsh was an active Methodist layman, serving on several boards and commissions in the Virginia annual conference and as a lay delegate to various general and jurisdictional conferences.

Marsh and the trustees embarked on a plan to enhance the college’s physical plant. Trustee Roger Milliken provided funds for a new science building, opened in 1961. To say that the century-old Main Building was showing its age would be kind. The building underwent a thorough renovation in 1960 and 1961 that saved the outer walls, but replaced the interior with a modern concrete-and-steel structure. Sadly, the renovation did not take the building’s historic nature into account. Two new residence halls opened in 1962 and 1963. These residence halls incorporated sitting rooms and private sleeping and studying rooms into the design. These were the first air-conditioned residences on campus, and the added rooms allowed the college to increase enrollment to around 1,000 students. Planning for an additional residence hall, a new campus center, and a new library occupied the rest of Marsh’s term, and these buildings opened the year after Marsh retired.

The college had several strong reasons for adding residence hall rooms, science facilities, and classroom space, not the least of which was demographic. The baby boomers began arriving on campus in the mid-1960s. With expanded facilities, the college was poised to accommodate the increasing numbers of students who wanted to enroll. Equally as important, the college’s facilities, particularly the library and science buildings, were aging, and these were becoming an impediment to improving the college’s academic quality.

Another change occurring in the South weighed heavily on minds at Wofford in the early 1960s. Beginning in the fall of 1963, the trustees and President Marsh began to try to decide how and when to desegregate the college. Most of the college’s constituencies – the alumni, the church, the college’s donors – were divided on the issue. The faculty strongly supported desegregation. After several months of study and deliberation, the trustees announced that the college’s admissions policy would be “applicable to all students, regardless of race or creed.” While this was controversial, and led to condemnation as well as praise from many quarters, the college did not retreat from or hesitate in implementing the decision.

In Marsh’s last years in office, the college developed the Interim, a one-month term, between the fall and spring semesters, where students could pursue special topics projects, internships, travel projects, or independent study topics. Faculty members sponsored these courses, termed “projects,” but students could develop their own as well. While faculty might sponsor projects in their area of expertise, the program encouraged them to explore new areas as well. The January Interim quickly became a central part of the Wofford experience.

Marsh retired as president during the summer of 1968 when he reached what was then the college's mandatory retirement age of 65. He returned to Williamsburg, where he taught graduate economics courses at William and Mary. He died on January 15, 1984.