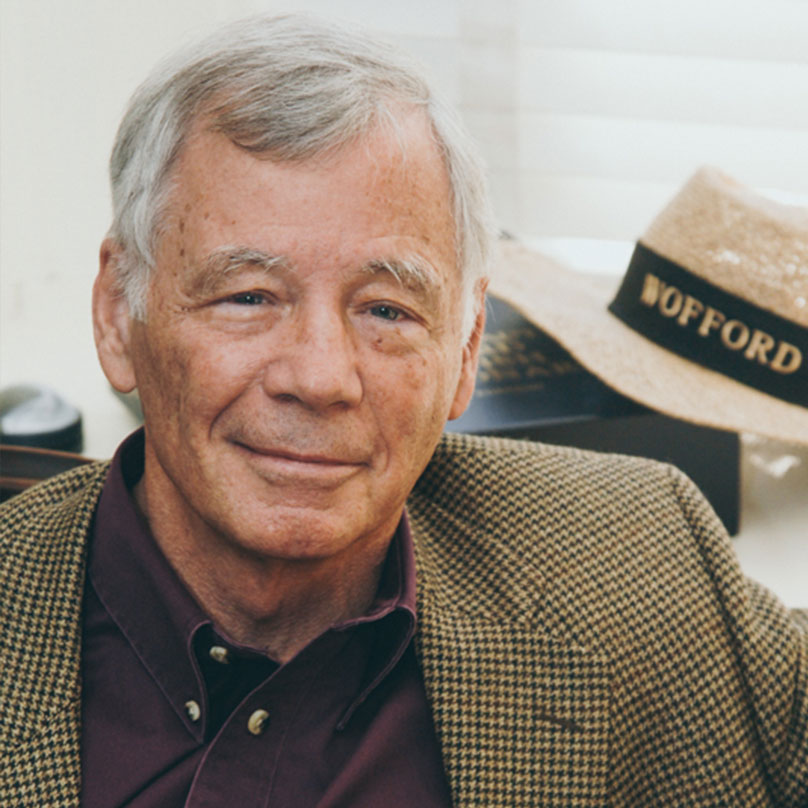 10th President of Wofford College, was born in Columbia, S.C. After graduating summa cum laude from Sewanee: The University of the South in 1959, he attended Oxford University as a Rhodes Scholar and Harvard University as a graduate student, receiving his Ph.D. in English Language and Literature in 1967. From that year until 1993, he held academic appointments at Harvard and the University of South Carolina, where he was awarded both the USC Teacher of the Year Award and the university’s Russell Award for Distinguished Scholarship. During that time, he twice served as a Fulbright Senior Lecturer in Bangkok, Thailand, and Chiang Mai, Thailand, and was also a member of the inaugural class of U.S.-Japan Leadership Fellows in Tokyo. In 1993, he accepted an appointment at Wofford College as the Chapman Family Professor in the Humanities, a position he still holds. In 2000, he became the 10th president of Wofford College.

Dunlap’s academic fields include literature, intellectual history, Asian studies, film history and criticism, fiction writing, and the arts. On those subjects and others, especially leadership and higher education, he has lectured and spoken widely in this country and abroad including an appearance as one of “Fifty Remarkable People” at the 2007 TED Conference in Monterey. A frequent moderator for the Aspen Institute’s Executive and C.E.O. Seminars as well as its Henry Crown Fellowship and such affiliated programs as the Executive Seminar Asia, the Faculty Seminars at Wye, the Aspen-Rodel Fellowship, the Africa Leadership Initiative, the Central European Leadership Initiative, and the Liberty Fellowship of South Carolina, he has also designed and moderated seminars in Europe, Africa, and the United States for corporate clients as varied as the Netflix Corporation, Young & Rubicam, the Waters Global Forum, the Nova Chemical Corporation, and the Arab Banking Corporation.

Dunlap’s many publications include poems, essays, anthologies, guides, and opera libretti as well as two novels in manuscript, Famous Dogs of the Civil War and Sunshine: The Autobiography of a Genius. As a writer-producer and on-camera talent for public television, he has been a major contributor to more than 200 programs, for which he has won numerous national and international awards, and, for four and a half years in the 1970’s and 80’s, he performed as soloist and principal dancer for the Columbia City Ballet.

He was married to Anne Boyd Dunlap from 1963 until her death in 2019. He has three grown children. In 2006, he was awarded an honorary doctorate by his alma mater, Sewanee: The University of the South.