The Class of 2026 is Wofford College’s largest ever incoming class with 508 students. They’re also the college’s most selective class and were chosen from a record 4,427 applications.

Meet seven Terriers who are beginning their Wofford journey as members of the Class of 2026. 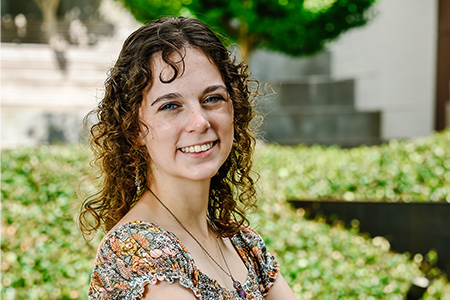 To me, art is a way of sharing life with others. It opens doors for me to truly experience the good, bad and mundane aspects of being human. Through my favorite art mediums — theatre and dance — I can help people feel seen, as well as see and understand the uniqueness of other cultures and people. Artistic inspiration comes from my everyday interactions with people. I am intrigued to see how people behave and how much their upbringing and current circumstances shape them as a people. I love to hear their stories and learn about the endless ways people experience life. I use that knowledge when I dive into new characters.

I am bringing empathy and ambition to Wofford. I take pride in my ability to create a safe haven for others to be themselves. Additionally, I look forward to countless conversations where I can have my beliefs challenged and challenge others. 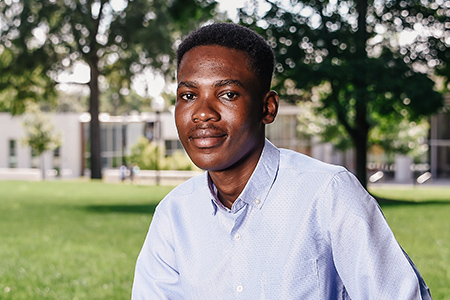 Joel Gammah ’26
INTERNATIONAL STUDENT AND A BONNER SCHOLAR
GHANA
Why did you choose Wofford?

I chose Wofford because I want to have access to the myriad of resources to engage in in-depth and collaborative research with my professors. I also chose Wofford because of its small student body. The advantage of such a tight-knit community is that I get to have more one-on-one interactions with my professors, and we all get to live on campus as a family. Did you have an opportunity to visit campus?

If so, what was your impression? If not, how did you feel comfortable choosing the college?

Unfortunately, I did not have the opportunity to visit the Wofford campus, but I was impressed with what I saw through the virtual tour and social media. Wofford’s Instagram gave me a great picture of what Wofford looked like, and I loved it. Wofford has a very beautiful campus.

I intend to major in computer science. A computer science major is going to give me the skills to help develop machine learning algorithms that will help predict rainfall patterns to help control the high rates of flood in Accra, Ghana. 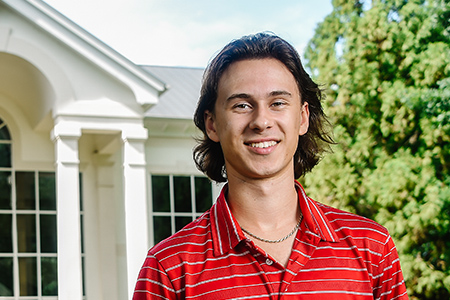 Adam Hoyle ’26
DANIEL SCHOLAR
BELMONT, N.C.
What have you read recently that has impacted or changed how you see the world?

Though typically read as a children’s book, “Alice in Wonderland” has taught me that there is not one perspective of life or set belief that we as people must follow, but rather to think individually, think creatively, and not limit ourselves to the patterns or standards of others but explore the world around us for ourselves.

I plan to major in English with an emphasis in creative writing because I admire the timeless values captured through writing as well as the pure emotion conveyed by personal expression through words.

I am bringing a diverse perspective to Wofford, whether it be in my studies as a literary author, as a curious student or just as a friend on campus. I will always strive to leave behind a positive attitude and promote a broadened array of thought. 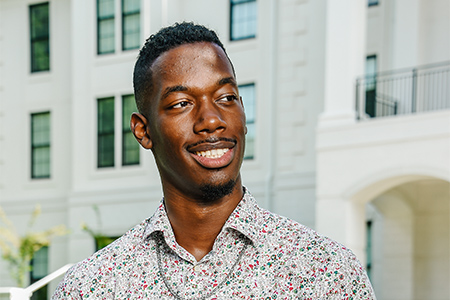 I chose Wofford because out of all the colleges and universities I was interested in, Wofford provided me with the most opportunity to succeed and thrive during and after college. With the resources available for me to use and the large network of alumni in the professional world, I believe that Wofford will propel me to becoming my best self.

What have you read recently that has impacted or changed how you see the world?

I am currently reading “The Defining Decade” by Meg Jay. It has impacted me greatly because it not only has shown me how influential this time of my life is, but it also relieves the tension that I must have my entire life figured out right now. These are the times when I can explore and shape my future.

I plan to major in physics. I chose this major because learning how the world works and its different properties has always intrigued me. I love understanding different forces and laws about reality. 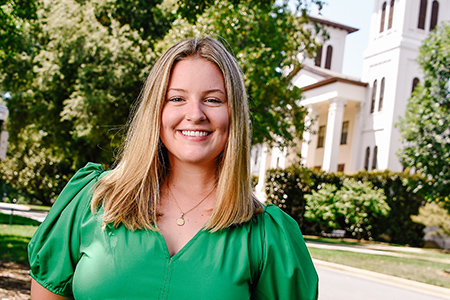 Lyndsay Moore ’26
A LEGACY STUDENT
COLUMBIA, S.C.
Why did you choose Wofford?

I learned to say, “Go Terriers!” before I could walk. I grew up going to Wofford football and basketball games every season. You could find a Wofford sticker on every car that picked me up from school or athletic practices as a child. So, when people heard I decided on Wofford, I am sure it was no surprise. However, it was not until late April, a week before college decision day, that I finally made my decision. I wanted to look deeper than the stories I heard from my parents, brother, aunts, uncle and grandfathers about their time at Wofford. It was clear to me that my family all enjoyed their time at Wofford, and I was sure I would feel the same, but I wanted to discover why Wofford was for me. I stayed at Wofford multiple times during my senior year, and what I learned about the people is what made my decision. When I arrived at Wofford, I instantly felt a sense of community. Wofford’s academics were also a huge factor in my decision. I have talked to multiple Wofford alumni in the medical community who have said they felt much more prepared for medical school than other students. 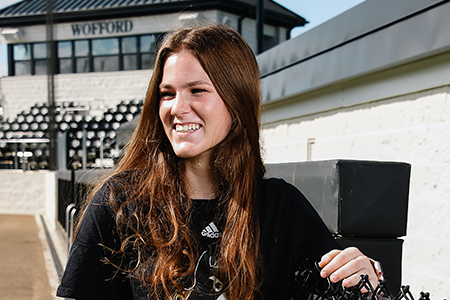 Kate Platte ’26
THE FIRST SIGNEE FOR THE SOFTBALL TEAM
AIKEN, S.C.
Why did you choose Wofford?

I chose Wofford because I knew I would receive a great education at a small college close to home while also having the opportunity to play softball. I felt immediately welcomed by the coaching staff and felt at home on Wofford’s beautiful campus.

I bring a great love for family and friends and a passion for education and softball. I also hope to bring a lead-by-example attitude and to help build a family-like atmosphere for our softball team.

What have you read recently that has impacted or changed how you see the world?

Reading the Bible every morning has changed how I see the world for the better. The Bible has always been important to me and my life goals. 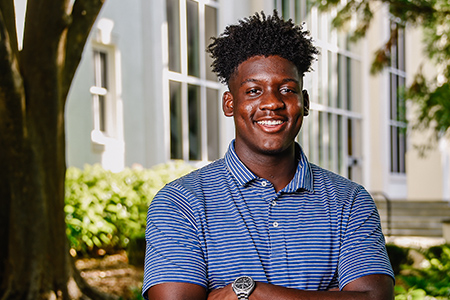 I wanted to be at the college that felt the most like home and offered a collaborative environment where I could establish close relationships with peers and professors. Wofford has that and so many more opportunities to have my best educational experience. I couldn’t imagine choosing anywhere else.

How does it feel to be a Daniel Scholar?

It is undeniably a great feeling to not only have access to an incredible education at no cost, but it’s an even better feeling to know that people and the college believe in me and my abilities. It’s certainly an investment that I take great pride and responsibility in making sure I return it in service and leadership to the future.

I plan to major in biology and minor in chemistry on the pre-dental track. I want to go to dental school with the target of being an oral surgeon, and I know the rigorous biology and chemistry curriculum will adequately prepare me for that path.