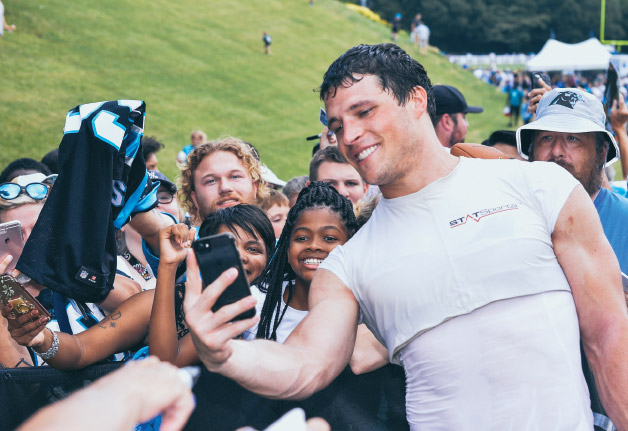 Nearly 66,000 fans visited Wofford’s campus this year for Carolina Panthers summer training camp, the fourth-largest crowd in the 24 years the college has played host to the team as it prepares for its upcoming season. While quarterback Cam Newton and linebacker Luke Kuechly were fan favorites, rookie wide receiver D.J. Moore captured a lot of attention, too.

Camp opened as usual with a huge kickoff party July 26 that drew more than 15,000 fans into Gibbs Stadium to watch the team’s first practice of camp, along with performances by the TopCats, Sir Purr, PurrCussion and the Black & Blue Crew.

“We love welcoming the Carolina Panthers back to Wofford for summer training camp and seeing the throngs of fans who come to watch practice,” President Nayef Samhat says. “It’s terrific that attendance this year was among the highest we’ve seen throughout our great relationship with the Panthers.

“Panthers training camp has drawn more than 800,000 visitors from all over the world during the 24 years of camp at Wofford,” Samhat continues. “It has had a staggeringly positive impact of more than $50 million on economic development in South Carolina. We look forward to hosting camp again in 2019.”

Riley Fields, Panthers’ director of community relations, says, “The team was excited to kick off the 2018 season with Panthers fans during training camp in Spartanburg at Wofford College. The strong support Panthers fans bring to training camp each year provides a special start to the season for both the team and fans alike.”