Wofford continues to be a national voice in the interfaith movement 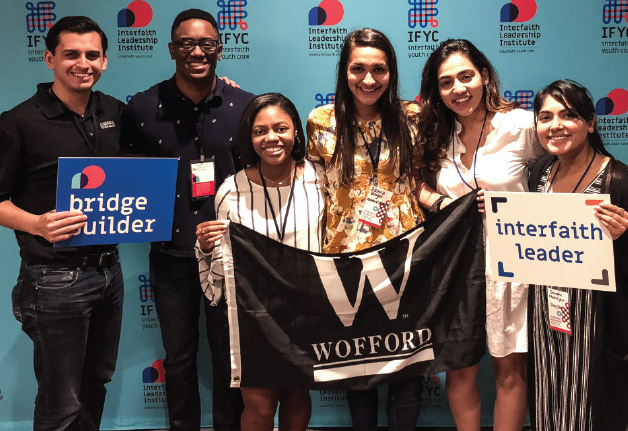 Six Wofford College students, including four of the college's five Campus Union executive officers, were among more than 400 students and educators from across the United States who gathered this summer to find ways to bridge the divide facing our country.

"Not only was the conference about interfaith, it was also about leadership and how to lead people of different faith backgrounds," says Bhagat. "Wofford is such a special place because of the community. We are accepting, and everyone has a place to belong."

The Rev. Dr. Ron Robinson ’78, Perkins-Prothro Chaplain and Professor of Religion and director of interfaith programs, decided to send the group to ILI when the student body elected the all-minority cabinet. Wofford has become a national player in the interfaith movement, and Robinson was pleased that the students were eager to participate.

"I knew what I wanted to do as soon as they were elected," he says. "We are the only college in attendance whose Campus Union executive officers attended this training as a group."

According to Madrid, the conference was designed to teach campus leaders the importance of finding connections in difference.

"The sessions taught us that serving others is a shared value that dominates the human heart, regardless of one's background," says Madrid. "It resonates with us because we feel a responsibility to respect, connect, serve and empower our community."

This summer Robinson also attended the InterFaith Conference of Metropolitan Washington, an international gathering in Washington, D.C., of some of the most well-known interfaith organizations in the world.

"We talked about how different generations approach faith differently," he says. "For my generation, interfaith centers around dialogue. Now it's about experience, doing service and how faith influences the desire to serve."