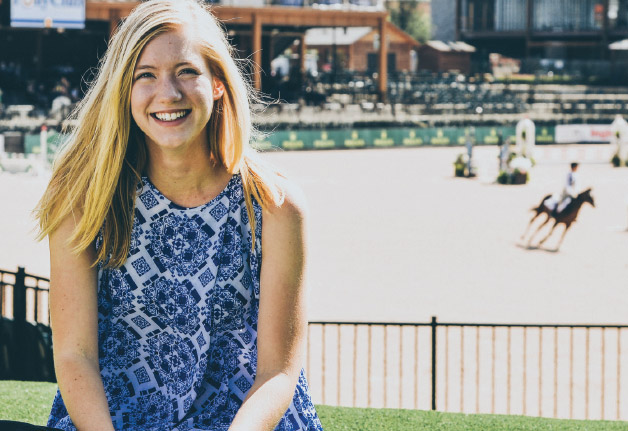 Just months into her first job out of college as public relations and marketing coordinator for the Tryon International Equestrian Center (TIEC) at Tryon Resort, Sarah Madden ’17 was given her dream assignment: Interview Beezie Madden, the first woman to pass the $1 million mark in earnings for show jumping and the first American rider to break into the top three on the show jumping world ranking list.

“I was so nervous. She’s one of the best riders in the world and one of my idols,” says Madden, who was a charter member of the Wofford equestrian team. “When I realized that she was hesitant, too — that she didn’t really feel comfortable being interviewed — I knew what to do. My training kicked in. … At the end of the interview, I thought, ‘Wow! If I can interview Beezie, I can interview anyone.’”

Madden, who wrote for the Old Gold and Black student newspaper, worked in the college’s Writing Center and was an intern in the college’s Office of Marketing and Communications, spent three months as an intern with TIEC before transitioning into a full-time job with the organization.

“I get to talk to people from all over the globe. Last year I escorted the number one rider in the world to the media center at the Central Park Horse Show, and last week I did a telephone interview with a rider in Japan,” says Madden. “I never would have guessed the things I’m doing every day. It’s so much more than I could have imagined.”

Madden likens TIEC to a Disney World for horse lovers with year-round events, shopping, dining, entertainment and equestrian competitions and training. Over the summer Madden and the TIEC were in high gear as they built, planned and promoted around the clock as the host of the FEI World Equestrian Games™ Tryon 2018 (WEG) from Sept. 11 through Sept. 23, 2018.

During the 13-day event, North Carolina projects an economic impact of more than $400 million with more than 500,000 spectators … and Sarah Madden is right in the middle of all of it.