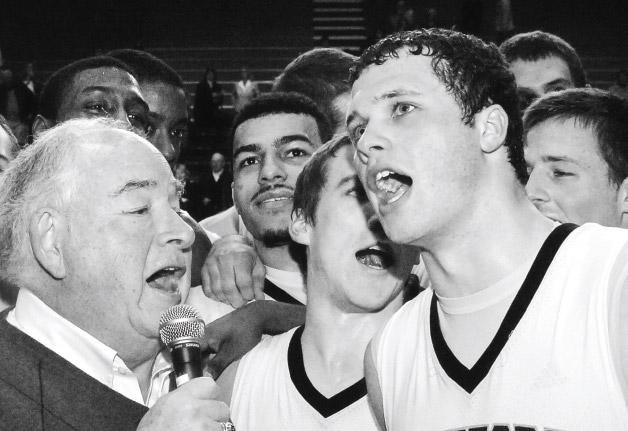 Twenty years ago, when the Rev. Dr. Lyn Pace ’99 was a student at Wofford and considering his own calling to the ministry, Chaplain Talmage Skinner ’56 told him and several of his peers that he wanted them to have a role in his memorial service.

Knowing that many Wofford alumni had “deeply meaningful things to say,” Pace, now the chaplain at Oxford College at Emory University in Atlanta, Ga., reached out to some of them in preparation for speaking at the June 16 memorial service, held in Leonard Auditorium.

“People cited his words from the homily he preached at their wedding, how he had influenced their vocation -— many are now clergy -— and how he brought patience, understanding and openness to the pastoral conversations he had with them as students and alumni,” Pace says. “He was truly a gift to so many people. He stepped into their lives and offered wise counsel, a loving heart and listening ear, and a space for them to settle into their true identity.”
Pace says Skinner, the longest-serving chaplain at Wofford -— serving from 1986 until his retirement in 2003 -— certainly mentored him. “I wouldn’t be doing this beautiful work with students if it weren’t for Talmage. He put me in leadership roles in ministry from the very beginning and guided me along my way. I can’t imagine my Wofford College experience without Talmage and his wife, Beverly.”

Video and photos of Skinner singing the alma mater along with Wofford basketball players are etched into many people’s memories. When it came time for him to sing it for the final time at a men’s basketball game in January 2011, unbeknownst to him, a special ceremony was planned. “Despite having a cold and fighting emotion, he was as good as ever,” an article in the Spartanburg Herald-Journal recounts, quoting Wofford head coach Mike Young: “… he belted that thing out like he was an opera singer,” as players gathered around Skinner to help.

Skinner, 84 at the time of his death, was active in Moyer's Men and the Wofford Glee Club as a student. He organized reunions for the group for years. Skinner was named the college’s first Perkins-Prothro Chaplain and Professor of Religion in 1997 and was the first director of the college’s Bonner Scholars Program. He also helped create the student volunteer organization Twin Towers. He received the Martin Luther King Jr. Humanitarian Award in 1991 from Wofford’s Association of African-American Students, and in 2003, he received the Francis Asbury Award from the United Methodist General Board of Higher Education and Ministry for his work as a campus chaplain.
The Skinners remained involved at the college for many years after retirement, eventually moving to Raleigh, N.C., to be with their daughter, Valerie Skinner Hendricks ’90, and her husband, Artie Hendricks ’90, granddaughter Smith Hendricks (16) and grandson Talmage Kirkwood (TK) Hendricks (10). In 2005, Talmage and Beverly jointly were awarded the Wofford Alumni Distinguished Service Award.

In 2008, the Talmage Boyd Skinner Jr. ’56 and Beverly Keadle Skinner Endowed Scholarship Fund was established to assist students who are at risk of having to withdraw from Wofford. Ben Waldrop ’93 and his wife, Aimee, donated the initial gift. Many alumni and friends have made gifts since, a testament to Skinner's impact.

Over his lifetime in the United Methodist ministry, Skinner had been pastor of local congregations in South Carolina and Tennessee, and he served for 10 years as chaplain and an instructor at Spartanburg Methodist College.
“My heart is heavy, and I’m sad,” Pace says of Skinner’s death, “but I’m also filled with joy knowing that Talmage’s life and legacy were rich and continue in so many of us in the lives we lead.”