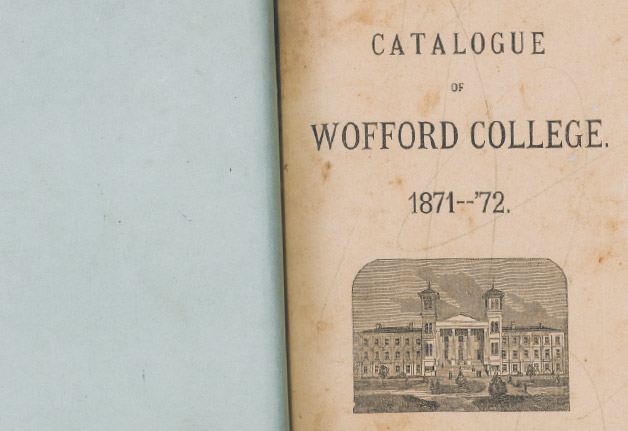 Wofford’s curriculum has evolved quite a bit since the first students began their course of study in August 1854.
Students who enrolled in the college’s early years took a set of courses prescribed by the faculty with no real flexibility. The curriculum was heavy on the classics, with students studying major Greek and Latin texts as well as ancient history, geometry, trigonometry, calculus, mineralogy and chemistry. Students also took several courses on moral and natural philosophy, political economy and evidences of Christianity. The curriculum remained largely unchanged until about 1875, with only the addition of a first-year course in English composition.

The first significant change in the course of study came after 1875 as the first generation of faculty gave way to a newer group. The course of study expanded to include both a bachelor of arts and a bachelor of science track, and junior and senior students had some limited choice in their courses. First- and second-year students still took mathematics, Greek, Latin and English. Juniors took Greek, Latin and chemistry and were able to pick from English, German, mathematics and logic; seniors had some choice between German, geology and political economy. The age of electives and majors was well in the future.

The number of course offerings grew in the years around World War I, but Greek and Latin, mathematics and astronomy, physics and geology, chemistry, Bible, English, German and French remained mainstays. History, economics, biology and psychology began to appear in the early 20th century. By 1930, students had to take two years of English, three years of English and Bible, one year of mathematics, two years each of two foreign languages, a year of ethics, a year of physics and one year of one other science.

The 1931 catalogue is the first to reference majors. The first majors were general groupings of ancient languages, Bible and religious education, education and psychology, English, mathematics and astronomy, modern languages, natural sciences or social sciences. By World War II, the “social sciences” major had been split into majors in history and economics or sociology and government. The post-World War II distribution requirements much more closely resemble today’s courses, with a requirement for four courses in English, four foreign language courses, two in mathematics, two science courses, two in social science, two in religion, one in philosophy and six hours in ROTC or physical education. That, with 30 hours in major work, made up the graduation requirements. First-year students were expected to take English, a foreign language, mathematics, a science course and PE.

The 1950s and 1960s saw some evolution in this model, and by 1966, before the creation of Interim, students had to take some 56 hours of general education credit. The college required English, foreign language, history, philosophy, religion, social science, natural science, mathematics and ROTC or PE. A significant revision of the curriculum in the early 1970s saw the social science and mathematics requirement dropped (math was later restored), and the English requirement was reduced. Since then, several new programs and majors have been added, and the curriculum in the 21st century is without a doubt more diverse and less regimented than it has ever been. The faculty, thanks in part to a grant from the Mellon Foundation, is doing an in-depth evaluation of the current general education requirements, once again assessing and improving the curriculum to prepare students for meaningful professions, community engagement and lives beyond Wofford.